The Curious Case of Jessica Jones 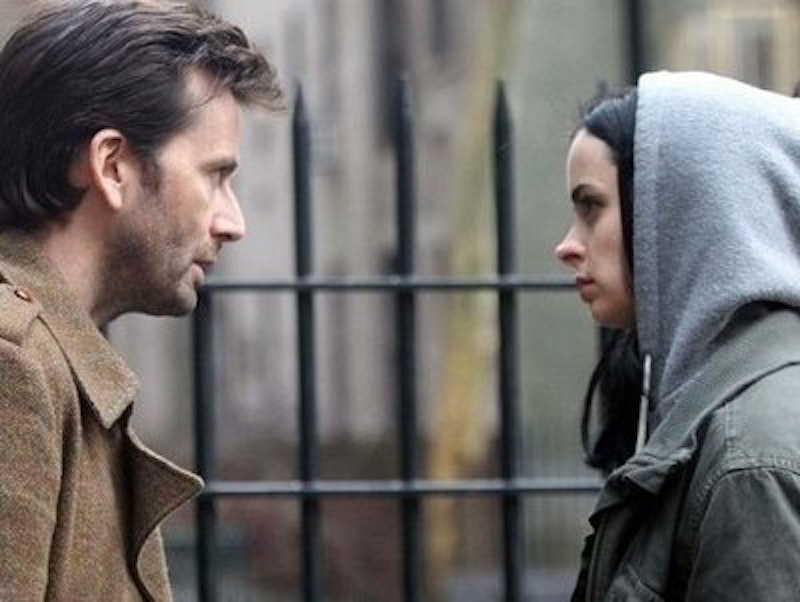 The Netflix series Jessica Jones, which premiered in November with a 13-episode first season, was probably the most talked-about television event of 2015 after the Mad Men finale. Based on the Marvel comics, the show, which follows a superhero-turned-private investigator, received accolades for its dark, gritty, emotionally rich treatment of the material. But it was also acclaimed for its cutting-edge feminism—and not just in the sense of being a female-led, female-driven story. Numerous reviews, blogposts, and think pieces have hailed Jessica Jones for tackling gender issues such as rape, consent, trauma, “toxic masculinity,” and even “patriarchy” itself. “This is not fair… but when dudes don’t like JESSICA JONES I kind of suspect they’re misogynist,” tweeted film critic Devin Faraci. While showrunner Melissa Rosenberg denies an intent to make an “issue series,” she’s acknowledged that some of its key themes are related to “the misogyny all around us.”

To those of us less than enchanted with feminism in its modern incarnation, this sounds like dreadful agitprop packaged as entertainment. Is it? With some trepidation, I decided to watch the show (which at least has the appeal of the brilliant David Tennant as the archvillain Kilgrave). It was more nuanced and subtle than I expected; indeed, its politics are likely to go entirely over the heads of those lucky enough to be unaware of current feminist and “social justice” discourse. But the more one is aware of the politics, the more heavy-handed and toxic they look—and the more they detract from the show’s quality.

While the show’s heroine possesses superhuman strength and speed, she’s also a badly damaged trauma survivor. Before the start of the series, Jessica fell into the clutches of the terrifying Kilgrave, whose mind control power is such that anyone near him must obey his every command—even to cut one’s throat. Jessica spent months as Kilgrave’s “lover” and was forced to kill an innocent woman before somehow breaking his hold on her.

In a pivotal scene, Jessica confronts Kilgrave about repeatedly raping her. Kilgrave indignantly protests that he had no way of knowing whether she was willing. Later, he claims that he believed she wanted to stay with him because she didn’t jump from a rooftop when free from his control for 18 seconds.

All this, argues writer Natalie Zutter on the sci-fi/fantasy website Tor.com, parallels real-life rape cases in which men defend themselves with “She didn’t say ‘no’… How was I supposed to know?”—or in which a woman’s claims are doubted because she remained friendly with her alleged rapist. Of course, those men have no mind-control powers, which is a critical distinction. But no matter: they have male privilege! Zutter thinks they are “denying or failing to recognize their own power and responsibility,” such as “overpowering physical size or strength” and “the figurative upper hand in pressuring women to be sexual creatures.” In other words: every man a Kilgrave, every woman a slave to his desires and whims. Which, if you think about it, is incredibly insulting to women.

This is no outlier but fairly typical Jessica Jones commentary. Artist and critic Cameron Carpenter praises the show runners for “providing [Kilgrave] with the tools we white men are granted upon birth.” On the pop culture site AV Club, reviewer Oliver Sava notes that Kilgrave’s self-serving excuse—“I never know if someone is doing what they want, or what I tell them to”—mirrors men’s problems with consent in our “patriarchal society where men are in power.” To some culture critics, Kilgrave may even represent the patriarchy itself, that insidious system of oppression that makes us perceive its commands as our own desires. (Actually, while Kilgrave’s ability to make people feel they want to do whatever he tells them was comic-book canon, the television show is fuzzy on this point: most of his victims seem to clearly know they’re enslaved, and some struggle to resist.)

It’s hard to tell how far Rosenberg and the other writers intended to take such metaphors. But there’s no doubt they were making a statement about consent and the disputed definition of rape. Jessica and Kilgrave have an ongoing argument about whether he’s a rapist, an issue he brings up again in their final confrontation. Kilgrave’s constant demands that Jessica and other women smile for him is also, as Rosenberg has confirmed, an intentional reference to the heinous male offense of asking women to smile. (“Smile!” is the title of the finale and Jessica’s final word to Kilgrave before she dispatches him.) And a major male character, police officer Will Simpson, is almost certainly meant as a deconstruction of the traditional male who sees himself as a rescuer and protector of women.

Unfortunately, when one sees the series through this political lens, a lot of its narrative choices start to look ideologically stacked. Is it a coincidence that the only two principal male “good guys” are black? Or that the villain-ish female principal, lawyer Jeri Hogarth—who works with Jessica but briefly helps Kilgrave for selfish, with horrific results—is a woman who embraces the cutthroat ethos of a male-dominated profession, has no loyalty to other women, and at one point is described (somewhat jarringly) as “a bastard”? Is it a coincidence that Jeri and the other female baddie, the abusive mother of Jessica’s friend Trish, are allowed to partly redeem themselves? Is there a feminist subtext in the flashback revelation that the car crash that killed young Jessica’s family, and eventually led to her superpowers, happened when her father got distracted telling her to give up the videogame device to her obnoxious little brother?

It should be noted that, from this perspective, Jessica Jones also has some glaring lapses from its own morality. For instance, the only reference to Kilgrave’s sexual violation of a man is played for laughs: “I once told a man to screw himself, can you imagine?” he says while complaining about the burden of his powers. This could be blamed on feminist insensitivity to male victimization; but an earlier episode also features what is, in effect, a joke about women crying rape as an excuse for consensual sex. When Jessica is tracking down Kilgrave’s victims, her visitors include a pregnant teen and her mother who claim the boy who got her pregnant is Kilgrave. “He said, ‘You want me bad,’ and I did want him—bad,” the girl says. If Jessica Jones weren’t the feminist cult hit of the year, this scene would have surely sparked social media outrage.

Neither of these jokes particularly bothered me. But some of the show’s double standards did.

One of the series’ central storylines is the romance between Jessica and bar owner (and fellow superhero) Luke Cage. It’s eventually revealed that Luke’s dead wife, Reva, was the woman slain by Jessica on Kilgrave’s orders, and that Jessica started following Luke in an attempt to deal with her guilt. While steamy sex wasn’t part of her plan, it happens anyway. When Luke learns the truth, he’s disgusted and tells Jessica he never wants to see her again—but later forgives her, after a firsthand experience of Kilgrave’s powers helps him understand Jessica’s predicament.

The show certainly treats Jessica’s behavior as morally shady; indeed, she’s disgusted with herself for deceiving Luke. But at least some feminist discourse would also classify her actions as a violation of consent, since she knowingly deceived Luke about a fact that would have surely stopped him from having sex with her. Luke’s reaction when he finds out—“You let me be inside you. You touched me with the same hands that killed my wife, while you knew”—actually does suggests that he feels violated. This may not be “rape by fraud,” but a show that prides itself on being keenly sensitive to issues of abuse really should have examined the implications. Indeed, a commenter on one blogpost about Jessica Jones remarked, “If Jessica were a man we would 100% be calling her a creepy stalker for the way she followed Luke.” (After that, it was right back to discussing the show’s abusive males.)

There is also something distasteful in the fact that, while pointedly avoiding rape scenes played for titillation, the showrunners revel in grisly violence bordering on torture porn—particularly in the scenes of suicide and self-harm by Kilgrave’s victims.

Bloomberg View columnist Megan McArdle has suggested that Jessica Jones is a casualty of its own feminism, in part because Kilgrave is so one-dimensionally evil that he becomes boring. I don’t quite agree. He’s too mercurial and quirky for that, if only due to Tennant’s performance; and he does have his occasional sympathetic moments, especially with his backstory as a child who has to undergo agonizing medical procedures and suddenly gained vast powers he couldn’t handle. But at times, it did feel as if the showrunners were too anxious to neutralize any pro-Kilgrave sympathies; a potentially interesting storyline in which he seemed to be making a sincere attempt at reformation in the hope of getting Jessica back was torpedoed much too soon by having him issue a particularly sadistic command. Even more questionable was Simpson’s fairly abrupt transformation into a villain.

And that’s too bad, because Jessica Jones has a lot going for it—not only as an atmospheric, psychologically suspenseful adventure show with a uniquely terrifying villain, but as a female-driven series with a dark and flawed heroine and a strong female friendship.  But it’s only a good show if one ignores its politics. It works if Kilgrave is a study in the horror of unlimited power, not a heavy-handed allegory for white male supremacy (which is non-existent in modern-day America and never amounted to absolute power). It works if Jessica’s enslavement by Kilgrave is her personal ordeal, not an allegory of the female condition. It works if Kilgrave’s irresistible command to smile is terrifying because it forces victims to collaborate in their violation, not because it resembles an ordinary man’s clumsy attempt at flirting. It works if Jessica’s “It’s not your fault” refrain to Kilgrave’s victims is a commentary on their particular predicament, not a message absolving the “non-privileged” of accountability.

Yet much of the critical reception welcomed Jessica Jones specifically as a show with a message, amplifying the worst of its politics (thus, Carpenter reads it as implying that any white male who claims to be a victim is just an insidious patriarch in denial). That says a lot about the current dominance of “social justice” ideology in the popular media, particularly digital media covering geek culture. It’s a trend that bodes ill for both criticism and entertainment.