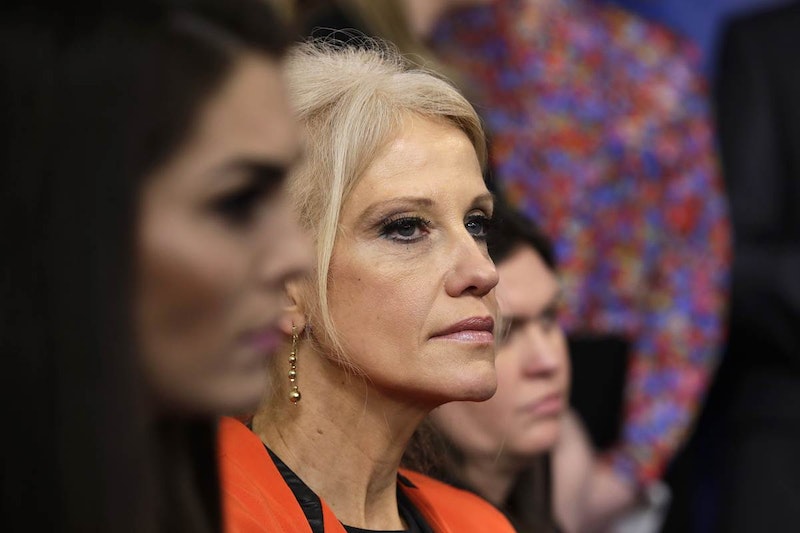 “We turn the other cheek,” Kellyanne Conway told Chris Wallace. “If you are part of team Trump, you walk around with these gaping, seeping wounds every single day, and that's fine.” The Trump administration’s foremost surrogate was unloading about the press. This was near the end of her appearance on Fox News Sunday. Her chin began to project across the set’s polished table and toward her host. Her hands sprang like little sparrows into the air, slashing little sparrows.

Up until then she’d been sitting with arms at her side, her chin in line with her sternum, her words proceeding at a swift but measured pace as she batted aside objections to Donald Trump’s handling of the Mexican president and Muslim immigration. “This whole idea that they’re being separated and ripped from their families, it’s temporary,” she said of the various small children taken from their parents as immigration officials sort through her boss’ orders. “It’s just circumstantial in terms of whether you are one of those 300 and some who were already on an aircraft or trying to get on an aircraft, as opposed to the over 3000 children who will be forevermore separated from the parents who perished on 9/11.” Her jaw stiffened a moment before she brought up the 3000 children. Her chin just held in place, a pause occurred, and then came the words. The pause was like the one she took last Sunday a moment before coining the term “alternative facts.” It was like she thought, “Yes, I’m going to say this” and then she said it.

Otherwise the first dozen minutes of her appearance went smoothly. Then Wallace asked about the media and she grew heated. Her words still hung together, but they came fast enough that they tripped on each other’s heels.

Like her boss, Conway has sensitive skin. Did she see that it was offensive when the White House told the press to shut up? “I understand how offensive it was to never be taken seriously that Donald Trump could be elected president,” Conway shot back. To illustrate cherry-picking by the media, she said she’d “ripped a new one to some of those hosts,” but that all the news reported was her saying “alternative facts.” Her overall premise seemed to be this: the people around Donald Trump didn’t feel good enough about themselves, therefore the press was doing a bad job.

Contrary to reports on social media, Conway didn’t appear to say that journalists should be fired for criticizing Trump. Judging from context, it seems she had in mind journalists who “talked smack” about candidate Trump and his chances. He won and therefore proved their incompetence—that was her thrust. Next time, of course, she may go broader. She may call for the firing of any journalist who faults the Chief Snowflake. But not yet.

“This was such an elite rejection of an election,” Conway said, analyzing 2016. “Where the establishment, the elites were all rejected by the voters. It turns out there are a heck of a lot more of them than us, Chris. And that’s how we won.” Chris didn’t mention that the voters actually chose the other candidate, not Trump. Nor that Trump, after his first week, had a Gallup approval rating of 42 percent and a disapproval rating of 51 percent. He didn’t even say that none of the 9/11 hijackers were from countries subject to Trump’s immigration ban. This is Fox and some facts don’t make the cut.