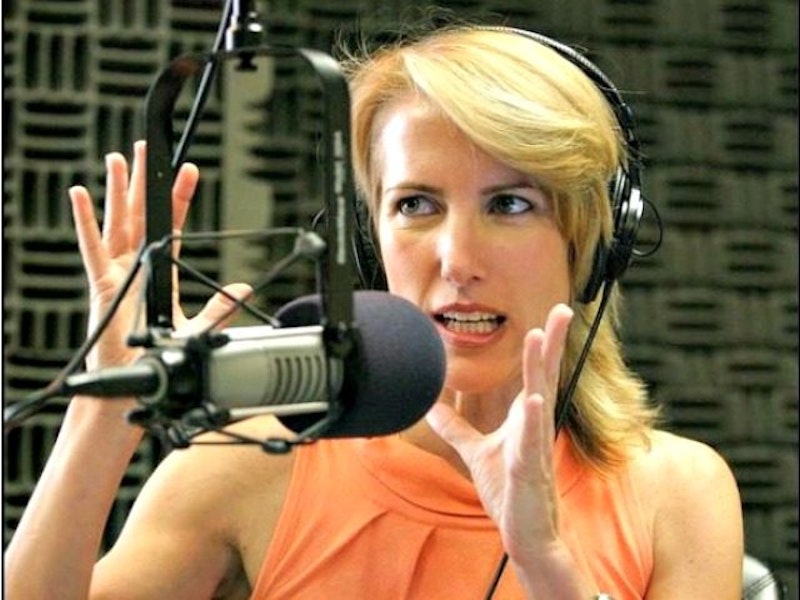 The conversation was cooking so hot that they’d just press on to show’s end, Laura Ingraham told her guests last Thursday. The Internet laughed, since there were no ads for her to run. Ingraham’s return to the air has seen more sponsors leave: Blue Apron, SlimFast, IBM. Now her total departed is around 30, and we’re told that ad time on the show has “dropped by as much as 52 percent.” Luckily Donald Trump fired missiles at Syria on Friday. The Ingraham Angle could fill its hour without a single ad, just the live stream of Jim Mattis taking questions, followed by a panel in which Sebastian Gorka yelled at Col. Douglas MacGregor (ret.), military analyst.

Ingraham talks about the fate of nations (unlike Gorka, she’s skeptical about the U.S. always fixing the world’s trouble spots), but she’s in hot water because of mundane things at home. She mouthed off and a kid got back at her. That is, she tweeted a remark about David Hogg, Parkland survivor, and he broke her ass with an answering tweet that listed her sponsors and told his followers to contact them. This led to the flight of Wayfair, Trip Advisor, Liberty Mutual, and others. Ingraham took a vacation for a week, and now is seeing how to fill air-time minus the normal ration of ads. Air strikes come in handy, and so does Dr. Gorka, a showman with a rubbery British accent and a flaring sense of indignation (“… and shame on you for questioning General Mattis, retired”).

Ingraham’s avoided a few words since her return. Nothing about Hogg or Parkland, and guns got a look-in only because some kids staged walkouts over abortion, and why didn’t the media cover that the way they did the gun control walkouts? Otherwise she’s been silenced on Hogg’s favorite topics. Ingraham compensates with ritual noise on the general topic of speaking out vs. being silenced by the intolerant left. Her first night back, she announced that she’d battle “the enemies of the First Amendment, of free expression, and free thought” with a recurring new segment called “Defending the First.” So far this segment has featured well-known talking heads agreeing with Ingraham about the badness of liberals silencing speech. Ben Shapiro was on Wednesday and Michelle Malkin for Thursday, and Malkin had to follow an interview with Reince Priebus. This suggests that “Defending the First” is rather dusty as crusades go. I’ll add that The O’Reilly Factor would dig up actual Wisconsin high schools that banned creches or whatever. Instead we have Ingraham and a fellow retread commiserating about the world and its bad ways. And they do this after Reince Priebus finishes talking.

The single best commentary I’ve read on Ingraham and David Hogg is this sentence by Allahpundit: “The great gun-control movement of 2018 is momentarily about avenging his personal butthurt at Laura Ingraham for behaving like a nasty juvenile herself.”

I’d swap out “nasty” for “petty,” but the rest stands. Ingraham started it all by making fun of Hogg for whining—or voicing disgruntlement—about his rejection by several colleges. He answered with his fatwa. What a footling point for her to make, and what an anvil response on his part. Ingraham’s followers have to pretend she spoke for a principle or made an argument; really what she did was pass a remark. Those outraged for Hogg have to pretend he’s under assault. But again, all Ingraham did was pass a remark. She was catty and now he’s slapped her financial mouth, and maybe her show is done and maybe not. Blue Apron has left and Hmeymim Airbase has been hit, and America can’t get guns under control, so instead we watch a lot of TV and argue about tweets. On the other hand, MyPillow and Ace Hardware are sticking with the show, so there’s that.