Book Review: It's Better Than It Looks: Reasons for Optimism in an Age of Fear.

Gregg Easterbrook writes that, despite what we hear, it's not time to give up yet. 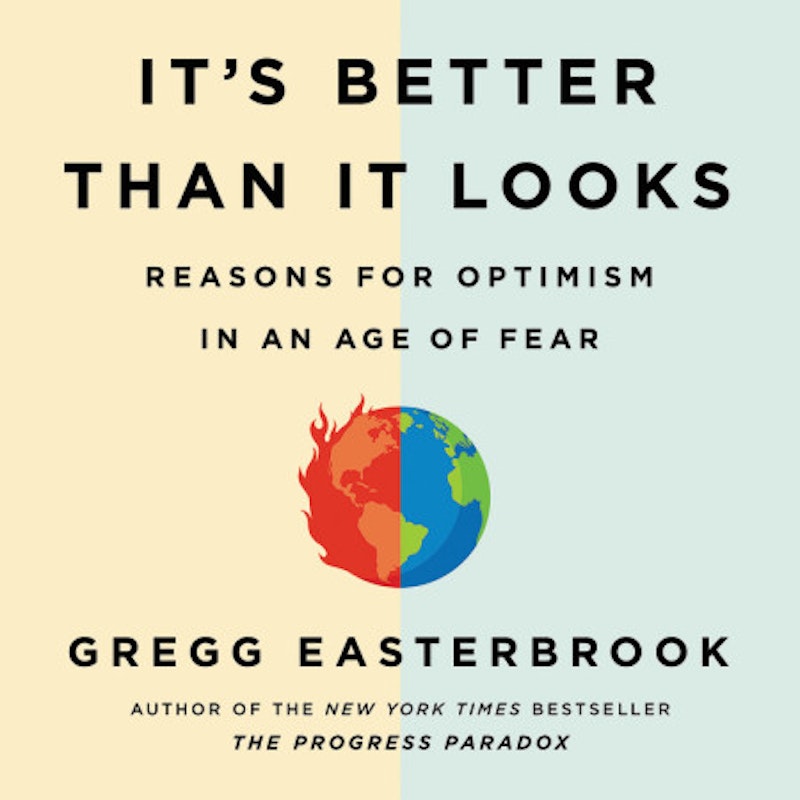 Keep up with the news or spend time on social media today and you can't miss the message that everything's going down the tubes all at once. The New York Times writes about a “crisis” about 30 times a day. Climate change will soon put urban areas underwater, robots will take all the jobs, fascism and terrorism are replacing democracy, systemic racism is just as bad as in the Jim Crow years, and the Gilded Age redux is upon us.

Those who haven't yet surrendered to despair and are still looking for some positivity based on solid reasoning ought to read Gregg Easterbrook’s latest book, It's Better Than It Looks: Reasons For Optimism In An Age Of Fear.

The author, who’s written for The Atlantic for nearly 40 years, begins with the observation that both Donald Trump and Bernie Sanders inaccurately portrayed the U.S. as a rotting corpse during their presidential campaigns. American cities, according to Trump, “have no education, they have no jobs.” Sanders spoke about the U.S. being “destroyed” except for the top one percent. People believed them even though the nation had never been stronger, writes Easterbrook, because that's what they wanted to believe. Despite living standards, per-capita income, health, safety, liberty and longevity being better than ever, people wanted to believe them because of the conundrum the author claims extensive research has taught him: “The better things get, the worse people feel.”

Easterbrook writes that the world’s food supply is strong and malnutrition is at an historical low, having dropped from 50 to 13 percent in the past 50 years. Also, resources are not exhausted, and there are no runaway plagues. Pollution isn't choking Western nations, goods and services are in ample supply, and dictators aren't winning. He refers to the “politics of competitive nostalgia” Americans are engaged in, which involves the desire to return to an idealized past that exists only in imaginations.

The author says that a farmer in Iowa named Norman Borlaug was “the most important person of the twentieth century.” The winner of the 1970 Nobel Peace Prize started the Green Revolution that was responsible for radically increasing global agricultural production, although that didn't stop respected Stanford University biologist and prophet of doom Paul Ehrlich from going on Johnny Carson's The Tonight Show in 1970 to warn the world that mass starvation killing hundreds of millions would come within 15 years, in North America as well as Africa.

Easterbrook reminds readers that many experts in 2005-2006 said that the avian flu would devastate humanity, but ended up taking only 450 lives. Ebola was going to be just as bad, according to a flipped-out media in 2015, but a total of two people contracted the disease in the U.S. The media and politicians love to peddle fear, but the leading causes of death in the U.S. are in decline.

The economy won't collapse, the author explains, despite dire warnings about the $20 trillion national debt and a general “collapse anxiety.” Nobody's running the global economy—not the Chinese, the central bankers or the heads of state—meaning it's decentralized and that no single entity can wreck a system that continues to improve living standards year after year. The U.S. is still a major manufacturing nation, writes Easterbrook, but the media only covers it when old factories close, not when new ones open.

Trump has his fearful followers convinced that the nation's in the midst of a crime explosion, but the author claims that our drama-loving president is an inhabitant of the “artificial world of television,” where crime gets worse and worse, even though it's actually in decline. Easterbrook's sanguine about technology too, and believes that all the uneasiness it's producing is once again a product of the pessimists granted more credibility than they deserve.

The central theme of Easterbrook's book is that while “declinism” is chic, it's overblown. Alarmists call setbacks calamities, and see routine chaos as rampant anarchy. Stories about hope and resilience don't sell like degradation, and predicting ruination can bring more funding for your pet project. Among intellectuals, you're a Pollyanna unless you embrace the darkness.

Books like Easterbrook’s can serve as an antidote to the culture of doom. It won't make you into a square to hear some good news for a change.