Out of Starbucks, Out of Syria 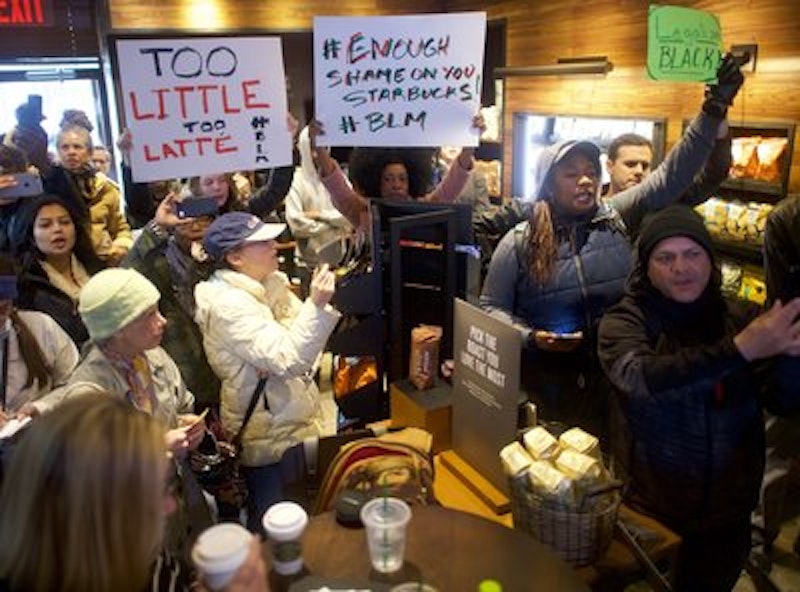 Vague, complex rules breed conflict, so we should stick to simple ones, and the most important is property.

If no one can use your body or property without your permission, you can plan a life, a home, a business. That means that if you want a functioning civil society, defer to the owner or the owner’s representative in a given establishment, domicile, or parcel of land, assuming you’re dealt with honestly, and assume he must show you the same deference on your property.

If Starbucks asks you to leave because you’re not a paying customer, you should leave. If you’re asked repeatedly, politely, and ultimately by police (in this case serving to enforce basic property rights), you should leave. I’m all for the current Starbucks boycott, though. Their CEO should indeed be punished—for apologizing about the recent incident in which men in a Starbucks who wouldn’t leave, and who refused even when asked by the cops, were quietly arrested. As the (black) police commissioner in the case, Richard Ross, has explained, the men were gently asked repeatedly, since they refused to make a purchase. You don’t gain magical squatter rights simply by being black.

But then, Starbucks is pretty effectively boycotting itself by temporarily closing 8000 of its locations to do ethnic sensitivity training sessions, as if the chain were currently a hotbed of hate.

Whether the barista in this case was a paranoid racist is beside the point, legally speaking. If a convention of lily-white Hell’s Angels members decide to bbq in my backyard under the false impression everyone in the world is welcome for Memorial Day, it really doesn’t matter, except for purposes of psychoanalyzing me, whether my desire to oust them is born of a hatred of white trash or a dislike of tattoos or a fear that they embody outmoded gender norms. The default assumption is that they need to go when asked by the property owner.

And if you claim that it would make national news if a white man were told by some business that he had to buy something before he was allowed to use the restroom, you’re either a bald-faced liar, insane, or unfamiliar with public restrooms, and I’m getting too old to keep humoring you, you hippie Marxist nutjob. Even if you know of an angry mob that agrees with you on the issue, you’re all insane. It’s not something to be proud of—though if you skip Starbucks today I imagine you’ll feel the righteous glow of the enlightened.

Contrast the clarity created by property rights with the simmering social morass created by the false assumption that we somehow collectively-own whole cities, nations, or even more vaguely and metaphysically, “societies.“

Whether it’s left-wing, right-wing, or pseudo-libertarian, the belief that other cultures shouldn’t be “invading” “our” territory—in cases where that territory is actually a multitude of different parcels of property, some welcoming and some not—leads not only to right-wing bloviating about building a southern border wall but also cowardly leftist bigots at The New Yorker fearing the arrival of mouth-watering Chick fil-A restaurants here as “creepy infiltration of New York,” since the founder was a devout Christian. (Speaking of restaurants, Robert Yee assures me on Twitter, after reading my recent column on McDonald’s Bling Mac poetry contest, that he’s a real human being, and I congratulate him again for winning.)

I think a city of eight million people can handle differing cultural and even theological perspectives in the field of chicken preparation. However, liberalism has long been veering in the direction of totalitarian, eliminationist thinking (that is, there must be no remaining pockets of resistance anywhere to leftist norms, not even one). That’s a problem that even many so-called libertarians, still mistaking contemporary liberalism for the more tolerant and individualistic 19th-century style of liberalism, fail to recognize. Libertarians who deny the creeping-intolerance problem tend to make more friends in the cultural establishment, though.

Chick fil-A- and Starbucks-fearing liberals probably ought to take some consolation from the fact that for the first time, white Christians are a minority in the U.S., which is fine with me, but that demographic shift is not enough change for some fanatics.

Contemporary liberalism’s intolerance has reached the point where even leftist journalist Glenn Greenwald is now railed against on Twitter as a “white supremacist” just for going on Tucker Carlson’s TV show to discourage military intervention in Syria, a pro-peace message you might expect liberals to sympathize with, depending on which day of the week it is. A leftist acquaintance of mine called me a white supremacist once merely for liking Seinfeld, though, so Greenwald can’t be too surprised by this sort of thing. This is how hyperbolic the left has become (and then they wonder what drove the right insane).

I humbly submit that only my hardcore-property-rights version of libertarianism can bring peace in Syria, Starbucks, or anywhere else: don’t tax, regulate, occupy without permission, or bomb—retaliating only against clear, specific, proven, individual aggressors.

Liberalism, by contrast, will tack hawkish or dovish depending on what its favorite politicians seem to want at the moment. Neoconservatism will keep bombing until peace occurs. Paleoconservatism/populism will attack refugees fleeing the warzone once the refugees reach our own border, even if there are parcels of private land willing to take them in. (And most mainstream libertarians, I admit, will avoid tackling the issue head-on by just pushing the message “Our faction is harmless!” which was more or less the 2016 Libertarian Party campaign slogan.)

Without coherent, convincing political-philosophical messages on the war topic (and others), we’re left with policy being guided by Trump’s whims and the shifting tone of media coverage—in a world where one of the most prominent energy companies on or adjacent to Syrian land, Genie, has on its board of advisors a familiar cast of characters including Dick Cheney, a former CIA director, Lord Rothschild, Larry Summers, and Rupert Murdoch, even as Sky TV in the UK, partially owned by Murdoch, is criticized for doing things like hastily bouncing a UK military commander off-air for saying he doubted the Syrian government was responsible for the recent chemical attack there that was used as the pretext for prolonged U.S. involvement.

If that sounds hawkishly conservative, I can’t turn to liberalism for a trustworthy Syria narrative either. Does the liberal establishment now want me to believe Trump's too friendly with Russia or that he’s launching World War III against Russia? That Trump has neglected Syria by wanting to pull out or that he’s being too aggressive there? I can see the argument for one or two of these positions but not all at the same time. Current CIA Director Mike Pompeo says we’ve already killed hundreds of Russians in Syria, which seems like a bad, dangerous idea if we’re not sure what we’re doing next.

And if conservatives think the mainstream media is unfair to Trump, they really ought to pay more attention to the way the centrist establishment on both sides of the aisle, including the major media, goes into its usual “serious,” tacitly-approving semi-silence once military attacks began. Destabilizing Middle Eastern regimes is core policy on both sides of the congressional aisle, though I wasn’t yet cynical enough to believe that back in the 1990s and 2000s.

Now, by contrast, I’m so cynical about U.S. government and the prospects for improving it that I think we should just encourage people to secede from it whenever possible.

South Carolina, which has a history of that sort of thing, has been making those noises again, and for a good reason: the desire to escape any federal gun-grabbing attempts. We wouldn’t want South Carolina to end up like England, where they’ve gone from banning guns to banning knives and now even some kitchenware-set sales. Protecting the right to bear arms is a far, far better reason to secede than defending slavery (racism is indeed bad, especially violent racism). Leave guns in the hands of no one but government and you’ll have no way to resist if, say, the government of Jefferson, Iowa goes insane and decides to start shooting all the local feral cats, as they’ve been talking about doing. Guns in private hands make governments a bit more cautious.

We’re also closer than ever before to seeing Californians vote on whether to break their state up into three smaller states. Good. The smaller and more local the governance, the better, but keep your eyes on the prize: The ultimate goal should be every person lording it over his or her own piece of property (and his or her own person) and no one else’s.

Mass migration, cross-border wars, and occupations of Starbucks all become much less likely when people have learned you shouldn’t even step on the neighbor’s lawn.