When you can’t control your emotions, your thoughts can be led anywhere and you can be made to look like a fool. 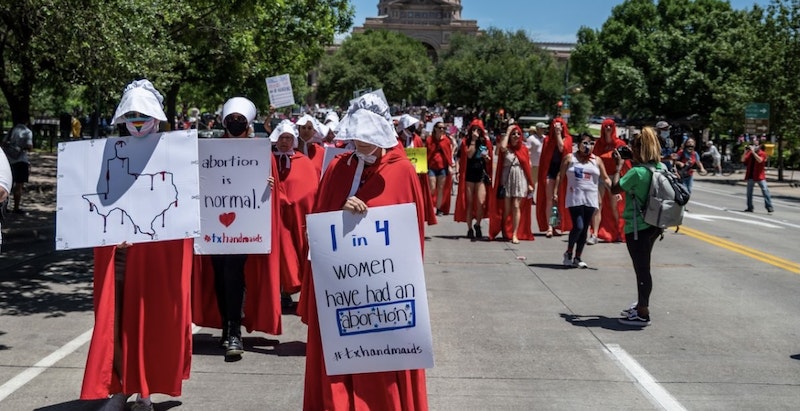 In a shocking chess move, Texas has maneuvered progressives back into the position of “my body, my choice” amidst their push for mandatory vaccines. All Texas conservatives had to do was bring up murdering babies and the people who are constantly calling for restricting other people’s freedom “if it saves one life” were able to be pulled into a logically indefensible position.

When you can’t control your emotions, your thoughts can be led anywhere and you can be made to look like a fool. Especially when your political philosophy is schizophrenic on a foundational level.

At a rally at the Texas State Capital, Greg “The Pronoun Kid” Casar, a local city councilman here in Austin and one of the childless, soulless “leaders” in the push to forcefully cover the mouths of other people’s children, was holding a “Bans Off Our Body” bandana.

Also there were about 24 women whose poor daily habits hang off their bodies like the weight of regret, three lesbians, and a dude who no one wants to sleep with took to the steps to chant “Bans off my body. My body is my own.” Everyone was wearing a mask to protect themselves, despite UV rays killing COVID on sight.

What dawned on me is the illustrative narcissism in the video attached. The response to COVID from American communists and the white-collar Zoom class was never about saving lives. This class was trying to protect their sloppy meat vehicles from COVID, just like abortion protects them from responsibility.

When 80 percent of those who are hospitalized are overweight or obese and you’re built like SpongeBob SquarePants’ house, you’re going to want to protect yourself. While some vulnerable people protected themselves by taking on the honorable task of changing their lifestyle choices and losing weight, and others simply moved out of nursing homes in New York to protect themselves, others want to force everyone to change their lifestyles to protect them from the poor choices they make on a daily basis.

The University of Minnesota found that the average age of death worldwide was 72.8 years. Various sources have found that the average number of life years lost per US COVID death in 2020 was 12 to 14 years. If we’re talking 73 to 85 or 87 years old, those aren’t exactly the most beautiful and easy years of one’s life. So, we made all of these massive societal changes to save people who were either too old to save themselves or too lazy to save themselves.

Their “if it saves one life” position is now flipped and they’re ready to cancel out a potential 70- or 80-years-of-life as those fetuses have the potential to grow into babies, children, adults, and then feeble 76-year-olds who could die of COVID-2097, who then, and only then, will be worthy of remaking the rules of society to save.

Raising children is a rewarding and worthwhile challenge. You learn about yourself while doing your best to pass on what you’ve learned to decrease the amount of unnecessary suffering that child has to take on in their life as a direct result of your ability to communicate and illustrate a proper mode of living.

In a selfish way, it’s the greatest self-development project you’ll ever take on. You’ll be better for it and, because you’re better, the people around you will be better for it as well. If you do a really good job as a parent, your child may be capable of moving forward into the world to help decrease the suffering of others as well.

It’s a tremendous gift to raise a child, but some people have been poisoned by ideology into almost worshipping abortion, rather than seeing abortion as something to be used sparingly in unfortunate circumstances that render the birth of that child to be not an option for a variety of personal reasons.

Abortion is not something to be mindlessly trifled with. The creation of life is the main point of our existence. It’s what we chase as a biological imperative.

People could also avoid the situation entirely by using birth control, but apparently we are pretending that highly successful option doesn’t exist when we have this conversation. Also, taking your life seriously and minimizing the amount of mindlessly sleeping around with people you wouldn’t want to reproduce with is a good strategy as well.

The psychological baggage that comes with having to make that decision to abort a child is not something I’d wish on someone, which is why compassion for those who have to experience the trauma of an abortion is a required mode of understanding no matter what your position on the act is.

Our ire or frustration must be directed at anyone spreading a message that abortion is something that should be widely used. That messaging does damage to people. And, in directing our attention at those spreading the pro-abortion propaganda, that’s something that we can’t ignore.

Abortion kills black babies at an alarming rate. Vaccine passports, if implemented, would prohibit black Americans from participating in society. A 2008 policy review by the Guttmacher Institute, says that the abortion rate for black women is almost five times higher than white women. One-third of abortions were for white women, while 37 percent of abortions were for black women. This was at a time when 72.4 percent of the population was white and just 12.6 percent were black.

Per a July 2018 article in The Wall Street Journal on the state of black births in New York City, more black babies are aborted in the city each year than are born alive. Read that again.

At some point we have to stop judging movements based on what they chant in the street and instead on the impact of their desired policies.