That Texas Abortion Ban is What Liberals Have Been Asking For

One of the most reliable fundraising tools for both parties comes up again, as if it's an "issue" ever meant to be resolved. 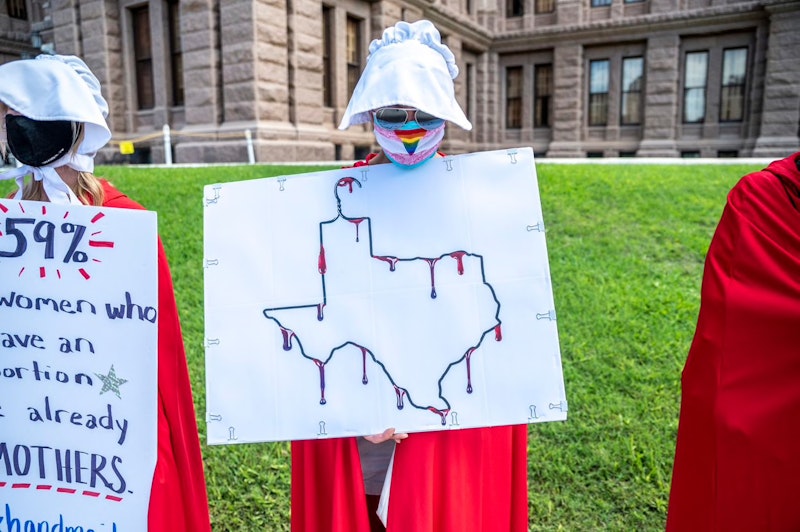 A recently enacted law in Texas doesn’t explicitly ban abortions in the state because that would violate the due process rights of a woman seeking the procedure, as defined by the Supreme Court in its 1973 Roe v. Wade decision. So Texas lawmakers got clever and developed a law that allows private citizens to sue others for performing or requesting abortions once a fetal heartbeat is detected. The lawmakers believe that since the enforcement mechanism here is civil rather than criminal and driven by citizens rather than the government that the law will withstand constitutional challenge.

It remains to be seen whether a civil or appellate court judge will recognize the standing of a citizen suing a doctor over some stranger’s abortion, but that’s what the law allows. If this law ultimately passes judicial scrutiny and isn’t legislated out of existence by Congress, one might imagine state governments getting very clever about allowing citizens to sue each other to regulate behaviors that cannot be criminalized by state and federal governments.

This is what some liberals have been asking for since the 2016 election when they called on social media companies to silence the speech of people they deemed purveyors of racism and misinformation. It’s not censorship, they argue, because First Amendment rights don’t apply in privately owned online spaces like Twitter, Facebook and YouTube. The government can’t punish or arrest you for suggesting that a livestock dewormer will cure your COVID, but the private police forces of the Internet can help stop people from ever hearing you say it. It never made much sense to believe that in a country brimming with opposing opinions that encouraging private citizens to use shame and exclusion to enforce conformity would’ve ended at the abolition of online COVID-memes and hate speech on podcasts.

What makes the Texas law seem different is that it spells out a potential $10,000 reward for plaintiffs who bring and win anti-abortion civil suits. This bounty definitely encourages people to sue, and Supreme Court Justice Sonia Sotomayor wrote: “In effect, the Texas Legislature has deputized the State's citizens as bounty hunters, offering them cash prizes for civilly prosecuting their neighbors' medical procedures.”

But states have similar schemes to encourage citizens to bring lawsuits against polluters. The idea is that I might see a company doing something illegal but can’t afford filing a lawsuit if there’s no potential reward. Also, a judge might not see a company polluting a river as a harm to me, so the law has built in a reward, to be paid by the company, for my tattling. The busybody local mechanic who sues a doctor for performing an abortion on the woman who lives across town hasn’t been damaged either, but can now get paid for meddling.

The difference between a law that allows citizens to be compensated for suing polluters and one that allows the same for suing abortion doctors is that it’s illegal to befoul nature but legal for doctors to perform abortions.

If the Texas law survives its coming legal challenges, it could lead to an ideological arms race in blue and red states. States could pass laws encouraging people to sue gun merchants. Michael Bloomberg might lobby states to deputize its citizens to drag sugary drink makers in front of judges. Maybe support for freedom of speech has eroded enough that states will try to allow people to sue their neighbors for spreading misinformation. In some states, it’d be easy to pass laws allowing citizens to sue school districts for teaching critical race theory.

Proponents of cancel culture through boycotts, ridicule, deplatforming and firings argue that they’re not violating anyone’s rights. If the consequences of speech are ostracization and poverty, so be it. Think or speak smarter in the future. Anti-abortion activists in Texas are about to claim the same. No doctors or patients are going to jail. No police or regulators are involved. It’s just one neighbor suing another, which happens daily.

It’s wrong for Texas to empower its anti-abortion citizens in this way, but it’s also wrong for the Biden Administration to flag social media posts for deletion in the name of public health. There are limits to what we allow the government to do, but our system is tolerant about what people do to each other. There’s no need to worry about an out-of-control government when your neighbor is the one legally and effectively oppressing you.