Pulling out was a mistake covered up by lies. 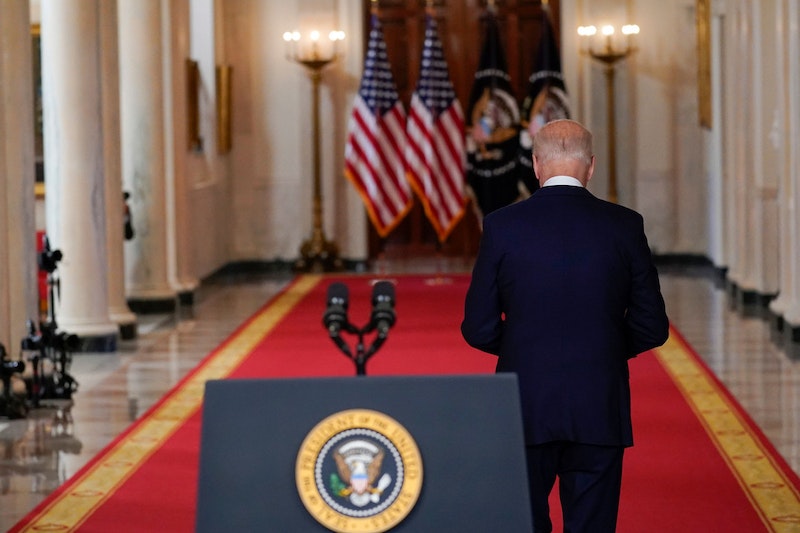 The photo I saw of a body dangling from a helicopter that the U.S. government once gave to the Afghan military and police forces, but now belongs to the Taliban, is unconfirmed. Regardless of its veracity, it contains an essential truth. Many hangings (and beatings, shootings, rapes, etc.) are on their way, once the Taliban gets serious about score-settling and terrorizing. I don't buy the Taliban's claim that they're a kinder, gentler version; that all they want is reconciliation. They're Islamist terrorists whose specialty's cruelty. The Taliban can clamp down on the media as hard as they want, but word of their atrocities will still get out.

Ever since the Afghanistan pullout began, people have told me it's the "right thing to do." Only time will tell. Also, the right thing for whom? Not for many of the Afghan translators who risked their lives to help the U.S. but weren't lucky enough to make it onto an evacuation plane.

There's obviously some potential level of disaster at which people would have to say that it wasn't the right thing to do, especially after our rapidly-aging president, who's been wrong on almost every U.S. foreign policy and national security issue for the last 40 years, was given sound military advice that it was the wrong thing to do. Joe Biden likes to go with his gut, but he's got a bad gut.

Regardless of the misery and mayhem, few partisan Democrats would ever admit that pulling out like this was a mistake. Media attention on Afghanistan will fade now that the pullout/surrender's complete, making it easier for partisans to put this disaster behind them. Biden's counted on that all along. He believes, probably correctly, that Americans don't care about Afghanistan. That includes all the feminists who have no instinct to protect Afghan women from the woman-hating Taliban.

Perhaps the withdrawal can already be deemed a failure. Let's assess the damage so far: At least 170 people, including 13 American soldiers, were killed in a terrorist attack by ISIS-K (the Pentagon admits that the Taliban may have aided them) at Hamid Karzai International Airport on August 26. As of that day, no service members had been killed or wounded in action in Afghanistan in 2021, according to the U.S. Defense Department. In 2020, four Americans were killed in combat there.

It's fair to point out that those four deaths are related to the rotten pullout deal Trump negotiated with the Taliban in Doha, but in 2019 there were only 17 combat deaths, and in the two years previous to that, 12 and 11.

Faced with the possibility of Afghanistan turning back into a terrorist state, with the added chance that al-Qaida may be regain a base in Afghanistan—is the nation with the world's most powerful military force not willing to lose any soldiers at all? If the rapid collapse of the Afghan government tanks the economy, leading to widespread hunger—a possibility Biden seems unconcerned with—will it still have been the "right thing to do"?

The military and intelligence communities understand the terrorism threat Afghanistan poses, which is why they recommended keeping a residual counterterrorism force in that nation. Biden rejected this advice. President Empathy's become cold as ice; he's willing to sacrifice a lot to get out of this "endless war." Biden also seems oblivious to the sacrifices of Afghan fighting men. An estimated 70,000 Afghan soldiers and police have lost their lives since 2001, but the President's response is, "They've got to fight for themselves, fight for their nation."

Lost in the war fatigue is that once you start a conflict like the U.S. did in Afghanistan, it requires an enduring commitment. In a couple of decades, plenty can be done, but it takes longer than that to prepare a military force to stand up to the Taliban. More time is needed to teach specialized technical skills, master combined arms battles (an approach to warfare involving the integration of different combat arms of a military in a mutual effort), and bring special forces operations up to speed. Press Secretary Jen Psaki, sounding as detached as her boss, said, "They have what they need," which was about as truthful as Biden's embarrassing declaration that it was "highly unlikely" the Taliban would soon be 'overrunning everything and owning the whole country.'"

Biden said this in a July phone call to Afghan president Ashraf Ghani: "The perception around the world and in parts of Afghanistan, I believe, is that things are not going well in terms of the fight against the Taliban. And there is a need, whether it is true or not, there is a need to project a different picture." Jen Psaki sure doesn't want to talk about that call.

When the final reckoning comes in, it’ll be clear that the U.S. withdrew precipitously from Afghanistan. Presidents G.W. Bush, Obama, Trump, and Biden all contributed to a failure that makes winners out of Iran, al-Qaeda, ISIS, and China; a failure that lowered American status among its allies.

In the end, it'll be bumbling Joe Biden who shoulders the lion's share of the blame. The weight of all his lies will eventually kick in. The President said on Aug. 20 he was "making the same commitment" towards the Afghans who worked for the U.S. as he was to the Americans in Afghanistan, but then the State Department admitted that the majority of those Afghans were left behind. Whatever happens to those unfortunates rests squarely on the shoulders of Biden, but he's given no indication that he cares.