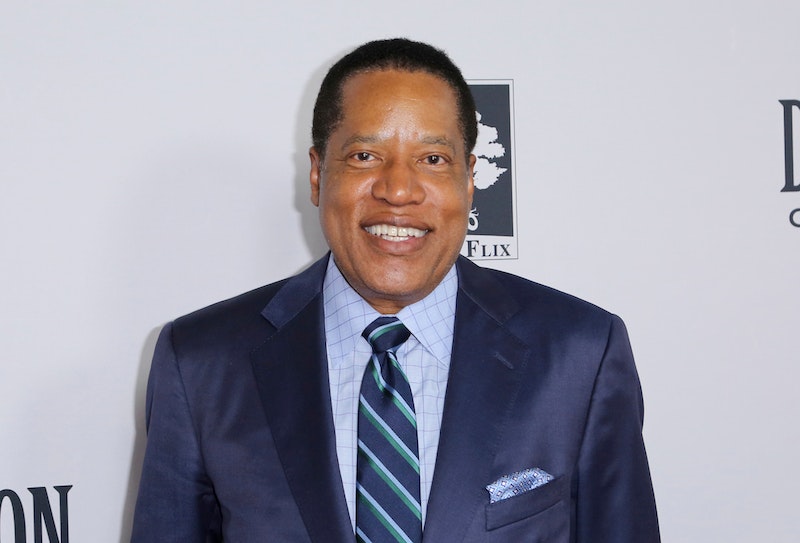 If black libertarian-conservative Larry Elder were elected governor of California in this week’s recall election, it might do wonders to end left/liberal racism, whatever personal flaws he may have.

The left—from street-level activists to those ultimate opportunistic ghouls, group-identity-pushing liberal professors—has gotten away for too long with the pretense that all non-white people are natural constituents of the left, even as the number of incidents showing otherwise rises by the day, most recently Elder having an egg tossed at him by a white leftist female in an ape mask.

The left hates people who stray from the ideological (and often ethnic or sexual) boundaries the left sets for them, even more than the right hates people who cross national borders without permission—and perhaps even more than libertarians hate violators of property rights (Elder is as much a libertarian as a conservative, which may give him a boost in a state that was burdened by insane taxes and regulations even before fluctuating COVID rules arose).

Black moderate John McWhorter argued at a dinner I attended back when Obama was running for president that it might defuse the country’s racial-ideological extremes if people saw that a black man can govern in a fairly moderate fashion (as I’d contend Obama did, despite some of the more heated fantasies of his biggest right-wing detractors and farthest-left fans). Reality being complex, it seems as though what happened instead of lasting racial healing, partly spurred by the rise of social media at that same time, is that while most of the country sounded increasingly centrist, the fringes who were not became far more vocal in response, threatening to drown out that culturally-moderate center.

I grant that the culture matters more than elections—I don’t vote, and hope I live to see the day when no one does, anywhere, and there are no governments—but for now, I do think it helps a little (across the whole political spectrum) any time the public sees that ethnic diversity needn’t come packaged with ever-larger government. It helps a little for New York City residents to see a relatively moderate black Democrat, Eric Adams—ex-Republican, anti-p.c., ex-cop, anti-crime, somewhat gun-friendly—become our likely next mayor (barring an amazing win from behind by Republican Curtis Sliwa), and it’d help on many levels for economically beleaguered California to be rescued by a black Republican with very free-market policy preferences, long though the odds of ousting Democrat Newsom look as I type this.

If the Democrats lose the ability to dupe people into thinking that pragmatists and non-racists must automatically vote for the Democrats, that party is doomed. That’s why they responded with particular ferocity to occasional strange eruptions of pro-Trump or right-wing sentiment among blacks over the past few years. The Democrats might lose their minds in an even noisier fashion if they found themselves with the unwelcome task of bashing a successful black governor who, veteran of years of radio shows that Elder is, could spend every day lecturing the populace about why socialism and racial grievance-mongering are roads to Hell.

Revisiting for a moment a recent favorite cultural barometer of mine—attitudes toward UFOs—I see this week is the 60th anniversary of the Betty and Barney Hill UFO sighting and purported abduction in New Hampshire. One of that incident’s many odd footnotes is that one “rational” explanation offered for the whole thing was the theory that white Betty and black Barney were suffering delusions caused by their anxiety over being an interracial couple—in love but, goes the theory, always somewhat “alien” to each other.

Whatever happened to them, I think it’s safe to say that very few Americans today are as frightened by members of other ethnic groups as they are of things like that leftist egg-lobber (who’s white) or, say, the armed (black) militia seen near Atlanta last year openly demanding “reparations” from stopped (white) motorists, the logical culmination of liberalism’s redistributive economic efforts and anger over the past 50 years.

If Americans are rightly afraid of leftist violence whether its perpetrators are black or (as in the case of most Antifa members) white, it’s unfair and very socially destructive to keep smearing them as racists for such fears. Harvard class of 2020 alum Claira Janover was surprised last year to find herself fired from Deloitte for threatening in an online video to fatally stab people who have the “caucacity” to say “All Lives Matter” (instead of specifically “Black Lives Matter”), exulting that she’d mock them as they bleed out. She cries in a subsequent video about mean conservatives bringing attention to her earlier video and causing her firing.

Idiots (some of them college professors) will pretend she was a victim of a hypocritical conservative version of “cancel culture.” By contrast, a fast-growing smart portion of the populace, to the left’s extreme frustration, recognize that Janover was hostile in a way that, say, one’s casual, decade-old tweet praising a sequence from Disney’s Song of the South is not.

While the left increasingly focuses on revisionist history as a means of maintaining their grip on the culture, just recently replacing the contents of a time capsule under a shattered Robert E. Lee sculpture with (quite fittingly) Kente cloth, a pin with a gay symbol, and an expired COVID vaccine vial—a combo perfect on multiple levels—they must know with a mounting sense of desperation that only destroying the entire past will ever do the trick and make their reality-dismissing philosophy viable. As long as there are a few molecules of past human experience remaining from which to learn, the left will end up refuted.

The future, which may not begin this very week but could begin with something just as simple as Elder’s election at any time, will be one in which everyone laughs at the white leftist (or in the case of the Los Angeles Times, the mostly-white newspaper) shrieking “White supremacist!” at black political leaders such as Elder. Give it up. The future is individualism, not carefully herded tribes. It will be more Elder than tribal elders, you might say.