Child of the Weather Underground faces recall election in June. 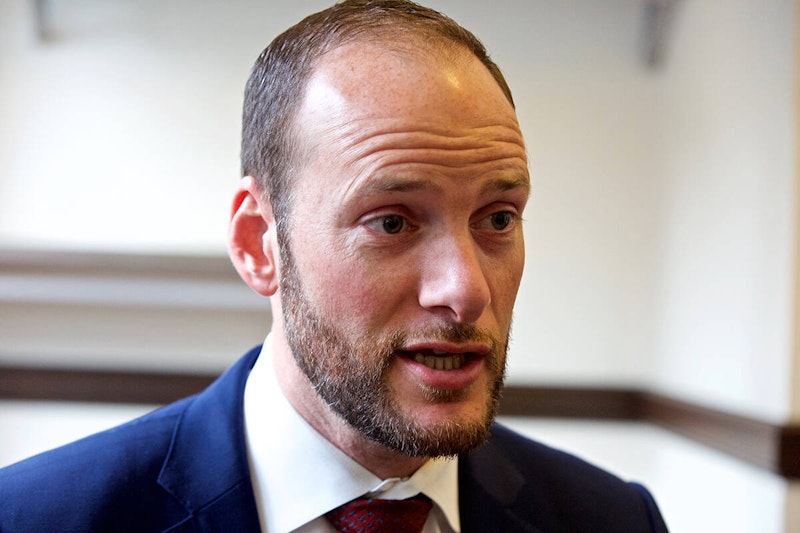 In 1981, when Chesa Boudin was 14 months old, his parents wanted to participate in an armed robbery of a Brink's truck in Rockland County, New York, so they left him with a babysitter, unaware that it was the last babysitter they'd ever need. Kathy Boudin and David Gilbert were members of the Weather Underground, a far-left group devoted to violence for "the cause." Two police officers and a security guard were killed in the course of the crime. Boudin and Gilbert received long prison sentences for murder, after which Bill Ayers—founder of the Weather Underground—and Bernadine Dohrn—Weather Underground member—adopted and raised young Chesa.

In 1969, Dohrn (who, along with three of her colleagues, blew up a Greenwich Village townhouse while making a bomb) said the following in Flint, Michigan regarding the Manson Clan's murders of actress Sharon Tate and her friends in Los Angeles: "Dig it. Offing those rich pigs with their own forks and knives, and then eating a meal in the same room, far out! The Weathermen dig Charles Manson. They even shoved a fork into the pig Tate's stomach! Wild!" Tate was pregnant at the time of her hideous murder.

Fast forward to present-day San Francisco, a city in the midst of a prolonged crime wave, where Chesa Boudin is now the city's D.A. Unlike former S.F. D.A., Kamala Harris, who favored jailing marijuana possessors and parents of truants, Boudin wants to let criminals off the hook right at a time when emboldened criminals are operating in a city considerably more crime-ridden than the average American city.

When Boudin ran for district attorney, he promised to no longer prosecute lower-level offenses like recreational drug use, which is a reasonable stance. The D.A., however, knows that citizens will pay a price as he pursues his "restorative justice" agenda. Asians, who are increasingly a target in the city's streets (SFPD said reported hate crimes against Asians went from nine victims in 2020 to 60 last year) are one group that's paying. Ahn Lê, 69, said a father-son duo beat him up in Chinatown in November 2019, and that the father held up a glass bottle and threatened to kill him. Lê is now suing Boudin and the city based on the claim that the defendants were offered a misdemeanor plea bargain involving no jail time, and that he wasn’t consulted. This was after charges of battery, felony elder abuse, and terroristic threats were initially filed. Lê said he'd later learn that the father-son team continued, that same day, to terrorize Asians.

Retailers are paying a price for the D.A.'s gentle approach to criminals. Brazen thieves regularly walk casually away with stolen merchandise, knowing they face little chance of prosecution. The shoplifters are afforded extra protection by California's Proposition 47, passed by voters in 2014, that reclassified felony theft offenses as misdemeanors if the value of stolen goods is less than $950.

Burglaries and car theft have all increased during Chesa Boudin's tenure. I doubt that bothers him much. San Francisco's burglary rate in 2020 outpaced all other major cities in the country. Homicides are up too, just as they are across the nation.

Still, a balanced analysis of the D.A.'s policies must take into account his good ideas, most of them falling under the rubric of the elimination of the "incarceration state." There's no way to achieve this worthy goal without putting fewer people in prison, but undertaking this mission is like navigating a field of landmines for a politician, especially in a city like San Francisco that's decayed for years. Boudin, the idealogue, appears to lack the required deftness to achieve this tricky task.

Eliminating cash bail, which Boudin ran on, would address a host of injustices, but it can't be so across-the-board that it frees violent criminals who can then find another victim. Boudin's touted a plan for creating a unit to review wrongful convictions, which should happen across the entire nation, and he also wants to move the district attorney's office away from prosecuting prostitution and minor quality-of-life crimes to focus on prosecuting the most serious offenses. I'm onboard with that plan. Victimless crimes shouldn’t be criminal offenses, but only a fool would believe Boudin's rationale for not prosecuting street-level drug dealers—they are "themselves victims of human trafficking."

The crux of problem is that Boudin, who once served as a translator in the Venezuelan Presidential Palace during the administration of Hugo Chavez, is a hardcore socialist at a time when even progressive San Francisco mayor, London Breed, says the city needs tough love. Breed, like Boudin, believes in giving people second chances, but she realizes the need for accountability when someone breaks the law. Boudin wants to focus more on the root cause of crime than the punitive aspect, but as D.A., he has no power to alleviate the root cause—poverty. That would involve, among other things, him taking on Silicon Valley, a major responsible cause of skyrocketing housing costs—and, therefore, homelessness—in San Francisco, and winning. That's not happening. By the time Boudin were to achieve his goals, the city would be uninhabitable to those not living in the poshest neighborhoods, which would hire their own security forces.

Boudin's too liberal for the most liberal big city in the U.S. He's being forced into a recall election on June 7. While the D.A. and his supporters characterize the recall effort as led by Republicans, over 83,000 San Franciscans signed the recall petition, and the city has only 33,788 registered Republicans, according to the Dept. of Elections. After June, the city will have at least a fighting chance of rescuing itself from self-destruction. That is, if it's not already too late.