Progressives are obsessed with his vaccination status, and happy he lost to the 49ers. 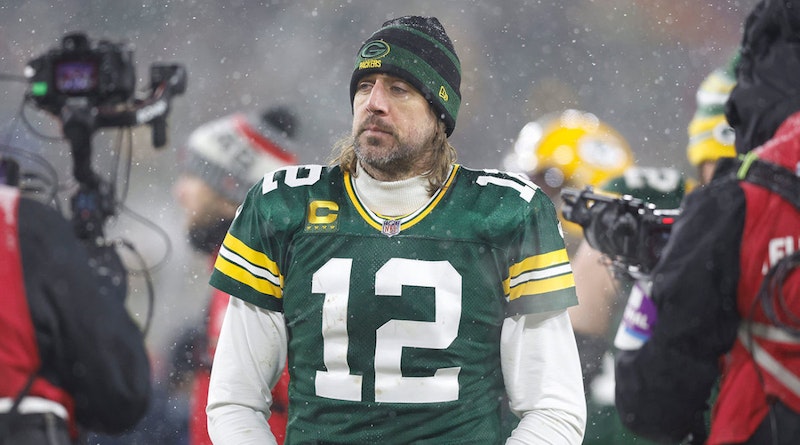 On Saturday evening, the San Francisco 49ers defeated the Green Bay Packers 13-10, putting them into the NFC championship game. As a rabid Niners fan, I found the game—especially the result—thrilling. Afterwards, I learned that many Americans who aren’t necessarily football fans shared my emotions because one of the most evil men in pro sports, along with Novak Djokovic (expelled from Australia prior to the Australian Open for not being vaccinated), got his ass kicked. Among many weak-minded individuals, this was considered poetic justice.

I'm talking about Packers QB Aaron Rodgers, aka "the Antichrist" among the Whole Foods crowd. Robert Reich, the 4' 11" former US Secretary of Labor, captured a particular narrow mentality with this ludicrous tweet: "Just a reminder: Colin Kaepernick led the 49ers to three victories over Aaron Rodgers and the Packers."

The former 49ers quarterback, one of the patron saints of the liberal/progressive set (he compared the NFL draft to a slave auction), single-handedly dominated the unvaxxed, selfish future Hall of Famer three times, and there's so much meaning in that stat! As the Bible teaches us, in the end, good will triumph over evil—it's God's promise. In the meantime, Nike sweatshop-cash will allow what passes for the new MLK to maintain his luxurious, pontificating lifestyle.

Aaron Rodgers, on the other hand, is a bad person who presumably doesn't buy things like the National Park Service's requirement for park visitors to be masked outdoors, when the sacred, (but not based in science) "six-foot" distancing rule can't be guaranteed outdoors. This knuckle-dragger must be "anti-science." Don't forget—the Democrats are strict adherents of the scientific method, but with select exceptions. Needless to say, "diversity" and "equity" trump science in the progressive utopia. Two plus two doesn't always equal four, which you can read about in the Marxist publication People's World. Enjoy the gibberish.

In the leftie dream paradise, Rodgers is a satanic figure. Among the enlightened elite, whose narrative the media dutifully propagates, he's alongside Joe Rogan as a menace to society, especially after asking the podcast host for medical advice after contracting Covid. These are the same people who have no problem masking three-year-olds. There’s no "science" backing such child abuse. Nor is there any morality in treating children as "vectors'' of a dreaded virus.

Rodgers, in the twilight of his career, and wealthy, has recently gone into unfiltered mode. The guy just doesn't care. The Packers legend, recently discussing Monday Night Football with the Manning brothers via Zoom, announced that he was currently reading Atlas Shrugged. That was a prevarication he fabricated to piss off the same opinionated people who despise him because he chose not to get the vaccine. The ones who relish the benefits capitalism bestows upon them while pretending to look down on Ayn Rand because of her staunch pro-capitalism views.

"Yeah, I’ve been immunized," said Rodgers during the preseason," although he didn't get vaccinated. I've been immunized with the vaccine, but if someone doesn't believe that the shot is the best for their health, they shouldn't be forced to get it. But the public pressure from liberals, if they're a sports star, is extreme, which may make them less than candid about their vax status. The “jab,” as we've been told since it came out, is highly effective, so those who don't get it can take their chances as far as I'm concerned. Keep in mind that the media has never covered any deleterious side effects from the vaccine, just as they’ve dissembled by calling Ivermectin a "horse dewormer."

A CDC study found that just 36 of a group of 1,228,664 people who were fully-vaccinated between December 2020 and October 2021 died because of the virus, and most of them had pre-existing conditions. That means that vaccinated people are safe, but that hasn't stopped many on the Left from whining about Aaron Rodgers. This tweet from a self-described "liberal" is representative of their unmoored loathing: "Aaron Rodgers managed to get an entire country to root against a team whose business model and ownership is the most progressive in the NFL and root FOR the team that fired Colin Kaepernick. Good job Aaron. #ByeAaron."

In addition to the unintended hilarity, what kind of progressive roots against an entire "progressive" team because they don't like one player on that team? Answer: the modern, smug version of a progressive. Also, contrary to the progressive narrative, the 49ers didn’t fire Kaepernick. In March 2017, with the last year of his contract remaining, Kaepernick announced his decision to opt out of that contract and enter free agency.

SFGATE's left-leaning Drew Magary, formerly of Deadspin, wrote a November column that typifies the bizarre fixation progressives have on Rodgers. The witless header reads, "Aaron Rodgers sucks and has always sucked." I didn't realize they awarded three MVP awards to someone who "sucks." Magary bemoans the fact that the quarterback "has conducted his press conferences in person and maskless all season, despite not being jabbed." Cloth masks are useless, and he was probably at least six feet away from journalists, but in the unlikely event that Rodgers got one of them infected with Covid, there'd be, per the CDC study referenced above, a .0029 percent of it being fatal among the vaccinated. To put that in perspective, .055 percent of people getting the flu die from it.

Consider the fact that Raiders wide receiver Henry Ruggs drove drunk in Las Vegas in November and killed a woman. She ended up burning to death after the accident in which the first-round draft pick was driving 156 MPH in a residential area. That horrific incident produced much less outrage (none, really) from progressives than Aaron Rodgers' vaccine status.