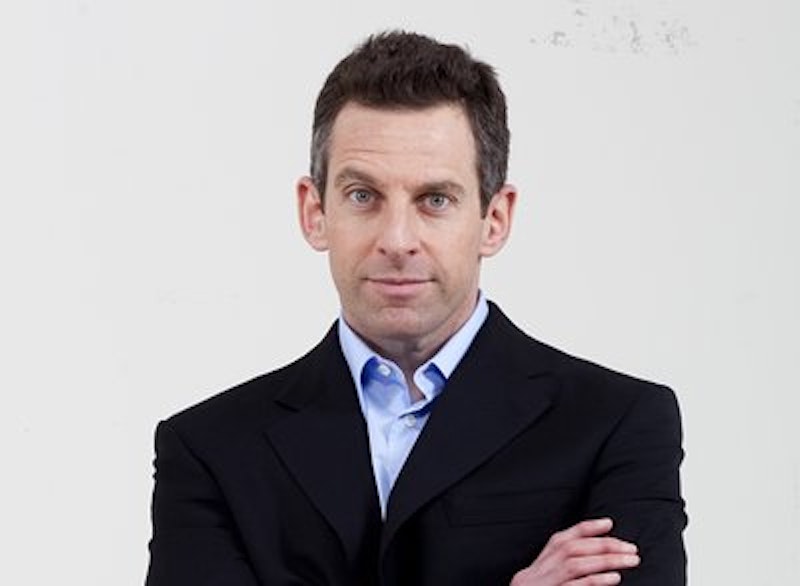 Sam Harris has had enough. The neuroscientist and vocal critic of Islam has long incurred the wrath of a certain crowd—who he’d call Islam apologists—whose main line of attack is to distort his views and set up strawman arguments against him. For daring to critique a religion, Harris has been branded as an Islamophobe, because they intentionally conflate his criticism of the doctrines of Islam with demeaning its individual adherents.

Harris is an academic who prefers debating ideas to hurling insults, and he’d prefer not to roll in the mud with his more rough-edged critics—including Glenn Greenwald, Murtaza Hussain (both from The Intercept), self-proclaimed religious scholar Reza Aslan and Cenk Uygur from The Young Turks broadcast—but he recently decided to appear on the Kyle Kulinski Show to vent about their collective character.

It's hardly surprising that Harris finally erupted against this surly bunch, given that they’ve called him a bigot, racist, fascist, Islamophobe, neocon and proponent of torture. One of their favorite tricks is taking a partial quote of his that might sound bad as a stand-alone and spreading it around, because that's how they play the game. Also, since their arguments against Harris and the New Atheists are so full of holes, the strategy of defaming their opponent is perhaps their only viable option.

Harris called Greenwald "an unscrupulous defamer of people," "an asshole,” and "a moral imbecile." He also said something I’ve always thought—that Greenwald rose to prominence by getting the political scoop of the decade merely because Edward Snowden chose to hand him all those NSA documents. The Greenwald role didn't go much beyond exchanging a few emails with Snowden. Greenwald is not a journalist by any stretch of the imagination, as Harris noted. He’s on a mission and he'll do whatever it takes to achieve it, acting as an advocate.

The general point Harris made in his two-hour talk with Kulinski is that his adversaries are making it easier for the Islamist theocrats of the world. For Islamists, the use of the word "Islamophobe" is used as a strategic weapon against those who criticize Islam. What Greenwald and his cohorts do is take advantage of our liberal values of tolerance and pluralism to promote an agenda whose goals are not at all liberal. Harris refers to them as the regressive left.

The regressive left is most dangerous is on the issue of free speech, which, as Harris told Kulinski, is the cornerstone of science and the basis for so many moral and political advancements over the years. Harris went into Greenwald's initial reaction to the Charlie Hebdo murders, which was to criticize the cartoonists as racists, when in the context of current French culture they are not. A key feature of the regressive left is, as Harris points out, their willingness to give up civil liberties out of fear of offending minorities. Once this concept is implanted, there will be very little free speech at all, as groups will just claim that what they don't want to hear is offensive.

Regressive leftists have given Harris endless grief over the topic of torture. Talk to any one of Greenwald's fanboys and it won't take long before you'll hear that Harris is pro-torture. Harris laid out the basics of his views on torture to Kulinski, and they’re narrowly-tailored. He believes that torture should be illegal, but that in very limited cases it’s not always unethical. If, for example, a life (or many lives) is in imminent danger he doesn’t feel it’s always unethical to make a person feel some pain if they have information that can save someone's life. People who can imagine catching the kidnapper of their child and hitting him to elicit information on the whereabouts of the child can probably understand such a scenario. When you tackle controversial issues in an open and honest way, you leave yourself open to abuse by your opponents, and Harris' foes have long associated his name with torture.

I can’t blame Harris for finally blasting the regressive leftists. I've never seen him like this before—the vulgarity and calling Murtaza Hussain a "psychotic"—but it must’ve been cathartic. They often act like, as he said, glorified cyber-bullies, unable to debate issues with facts. When they make major mistakes, like Hussain did recently in calling Maajid Nawaz a "porch monkey," they just ramp it up because they know their acolytes don't care about such matters.

Harris wrote a book criticizing Christianity, not on Islam, but Greenwald calls him a bigot against Muslims. Bill Maher completely skewered Christianity in his movie Religulous, but regressive leftists call him an anti-Muslim bigot too. They’re attempting to censor those they oppose, because the regressive left does not really believe in free speech if they deem it "offensive."