Voters boot the right, gear up for good times. 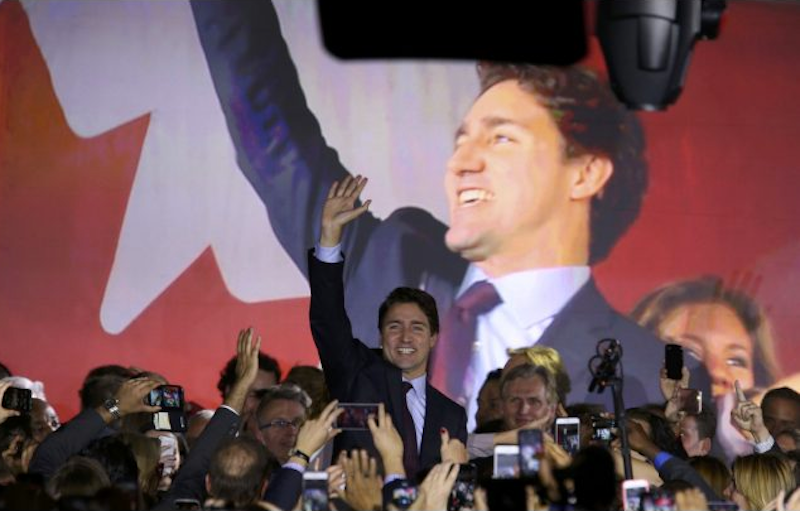 Justin Trudeau went on stage and talked about listening. He's inclusive and happy and has bouncy hair. The man he just beat, Prime Minister Stephen Harper, is buttoned-down and cool-eyed and tends to work people like levers. Harper recently announced plans to let Canadians phone a special line whenever a neighbor committed “barbaric cultural practices.” This idea was supposed to be a vote winner. But on election night, the Conservatives lost and the Liberals won. Young Trudeau told the crowd about the woman in a hijab—“a practitioner of the Muslim faith”—who rushed up to him with her child and said something he would never forget. She was going to vote Liberal because she knew the Liberals would never tell a woman what she could wear. “A Canadian is a Canadian is a Canadian!” Trudeau shouted.

People made fun of him during the campaign. The night of his first debate, a reporter said, “Your closing remarks were... they were... they were kind of horrible.” The remarks included, “We are who we are, Canada is what it is, because in our hearts we've always known that better is always possible.” Last night Trudeau yelled, “In Canada, better is always possible!” He had a crowd yelling it with him, and he had the government.

Stepping back, the election looks this way. Canada sells oil to stay prosperous, and oil prices are way down. Of Canada's three leading parties, only the Liberals are willing to run some deficits and build some bridges to get the economy moving again. In the meantime, the party wants Canadians to stop feeling broke and scared. Good times are coming again, and you don't have to worry that the brown people are about to do awful things. This message—good times, stop being so scared—is sold by a smiling, energetic young man who makes normally disposed people feel kind of peppy and upbeat when they look at him.

Commentators remarked last night that Trudeau's campaign borrowed from the Barack Obama playbook. “Yeah, hope and change,” one said. That's what it is. The happy prince beat the troll, the bus may finally show up.

Canada's latest landslide.  At latest count, Trudeau and the Liberals have won 185 seats and 39.5% of the popular vote. The seats count the most because they decide who controls the House of Commons, and Commons passes the country's laws. The Liberals now have more than half the seats and can pass any law they want, no help needed from other parties. Not only will the Liberals govern, they will do it without giving their rivals any veto power over what the party wants to do. President Obama had to shave down his stimulus plan to squeeze it past the filibuster. The Canadian system is different. A party with a clear majority can go ahead and make things happen.

The Liberals' share of the popular vote is a landslide by Canadian standards, given that five or so parties typically compete in national elections. In Calgary, which is enemy territory, the Liberals won their first seat in 47 years. In Quebec, where they had been deserted en masse during the last election, the masse came swarming back. And so on.

Four years ago the Liberals almost disappeared. It was a brutal election night, so bad the party couldn't even make second. The natural governing party of Canada wouldn't even run the opposition. It was broken down to third place and joined the miniature parties, the litter that hangs around and comments. Now the Liberal Party is back, like a heavyweight champion who turns into a bottle picker and then becomes champion again. But four years ago the Conservatives had the kind of night the Liberals just had. The New Democrats, Canada's perpetual third-place party, enjoyed a landslide all their own, in Quebec. Now the land has slid back in the other direction. One wonders if Canada is going to make a habit of this.