The Right Headed in the Wrong Direction

The onus put on the Republican moderates is dooming the Party. 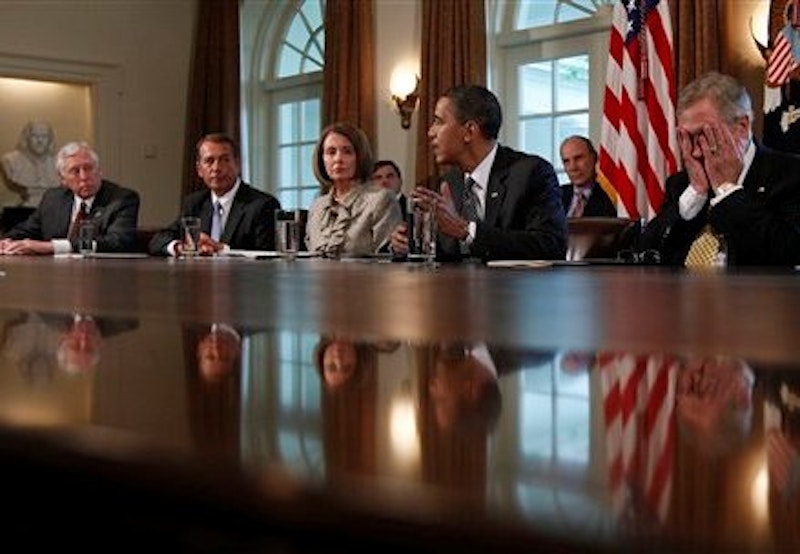 President Obama’s first year and half in office hasn’t been an unqualified success.  His popularity rating is sagging below 50 percent, the passage of health-care reform has done little to help him, and his ability to deal with the struggling economy is now being questioned. The political climate is ripe for the Republicans to make a strong run at Congress in November and the White House in 2012, but their ability to organize such an offensive is debatable.  The Republicans have taken the concept of political opposition to heart: not a single GOP representative voted in favor of the President’s stimulus package or his health-care reform bill. They showed uneasy support for the financial regulation of last year but only because anger on Wall Street left them no choice. However, this negative ambiguity will only take them so far; the American public expects more than angry opposition, they expect solutions.

At the moment the Republican Party is engaging in a civil war. The battle rages between a handful of moderate Republicans who realize the need for cooperation, and a band a far-right-wingers who see any form of collaboration as unacceptable. The provocative Tea Party movement has only muddied the political environment as adherents are attempting to the Republican Party back to its “purest” form and reject all compromise. The political right is digging its own grave at the moment, and with the November Congressional elections quickly approaching, the need to organize is becoming urgent.

All 435 seats in the House are up for grabs in November, and the polls predict heavy losses for the Democrats, who currently have a 39-seat majority there. This is mainly due to frustration with the Democratic incumbents rather than strong support for Republican candidates. The stage is set for a major swing of the political pendulum if the Republicans can play their cards rights. This may mean restraining some of the purist Tea-infused right-wingers and adopting a pragmatic strategy rather than one based on stubborn opposition. The Party has a good opportunity to take back some legislative power, at least enough to hinder the Democrats from breaking a filibuster in the Senate. If they act carefully and rationally they may be able to strike a blow at the vulnerable Democrats and lay some groundwork for a more respectable run at the White House.

Although the Presidential election of 2012 is more than two years away, one cannot help but speculate on the GOP’s possible pick for an “Obama Slayer.” However, at the moment the Republicans are lacking a candidate worthy of this title. Since the Republican infiltration into Southern politics after the Civil Rights Act of 1964, the American political system has become increasingly partisan, creating an ever-widening ideological divide between conservative Republicans and liberal Democrats. This widening of the political chasm, which really came to fore in 2000, has left a vast untended center from which a viable, well-financed, centrist candidate could possibly emerge in the 2012 election. However, the Republican Party does not seem ready to field such a player. In a party presently characterized by tip of the right wing ideology, the political center is a forbidden zone for conservative policy makers.

So the question arises, what do the Republicans have to work with? Straw polls have revealed that conservatives currently see Ron Paul, Mitt Romney, and Sarah Palin as their frontrunners for the nomination. However, none of these candidates realistically possess the ability to run a successful campaign in 2012; Paul is too radical, Romney too wishy-washy, and Palin too inexperienced. The Republicans desperately need a fresh candidate to step up and take control. One excellent candidate who could’ve potentially threatened Obama is the General David Petraeus, but having just replaced Stanley McChrystal as top US and NATO Commander in Afghanistan this is no longer an option. Even though the Party is currently lacking a formidable presidential hopeful, it is still too early to rule them out of the race. The election is two years away, and Obama has set events in motion, such as healthcare and the Afghanistan troop surge, that could make or break his presidency within this timeframe.
The real problem that Republicans should be worrying about is their strategy if they do in fact win a majority in the House of Representatives this November. With the stage set for a legitimate push at the White House, would they be able to deliver? Will the battling Republican factions learn to embrace one another and work cooperatively, or will they continue to bicker and collapse upon themselves? If they do not break this trend of radical small-government purity, the latter could come to fruition.