Perhaps Brexit was inevitable as soon as they started confiscating butchers' scales. 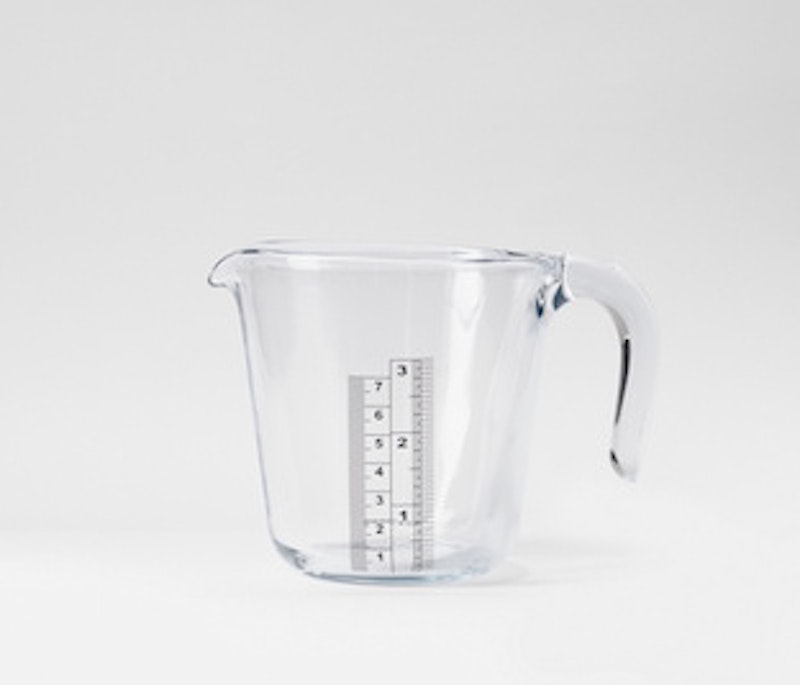 The battle between metric and "imperial" or "customary" measurement, recently taken up again by "anti-metrite" pundits James Panero and Tucker Carlson, shows there’s a real world apart from our representations of it. It all makes no sense, of course, unless there's stuff in the world—liquids, for example, or the distances between this and that—that can be measured in various ways without being altered by the measurement.

That metric and imperial are convertible into one another, in other words, presupposes that there are real facts outside of our heads and cultural practices. That might cause consternation among postmodernists, narrativists, Absolute Idealists, social constructionists, and phenomenologists everywhere, showing them to be trapped in a world they never made. Deep in their hearts, they already know they are.

On the other hand, even though they don't create worlds, things like systems of measurement do reflect and shape us. They alter rulers, measuring cups, signage, and scales, for example. So though the recent resurgence of devotion to Fahrenheit, cups and gallons, yards and miles, pounds and ounces, bushels and pecks, makes no difference with regard to the nature of the world, it expresses something about us, about how we encounter the one reality we all inhabit, and about who we actually are and who we want to convince ourselves that we are.

In that sense, I assert that metric, as a system for measuring all things, yields an unfortunate and in some sense misleading way of experiencing the world. It represents a kind of wishful thinking.

One way to express my objections is in terms of aesthetics. Traditional measurements are eccentric and complexly interrelated, having emerged over centuries for various purposes. They are connected explicitly to the human body: the foot as a foot, the yard as a stride, and so forth. I might compare the picture of the world they yield to the paintings of Rembrandt: complex, human, uneven, with a light (not to be measured exhaustively in lumens) that both reveals and obscures.

We might think of the metric system, on the other hand, as more along the lines of neo-classicism like that of Jacques-Louis David or even minimalism a la Mondrian or Donald Judd: the result of a kind of brutal rationalization of experience that tries to make the world into a reflection of human logic or even to reduce the world to something immediately (and delusory) comprehensible. It's an attempt to box the universe up and rake it with klieg lights, destroying all shadows.

Neither system, in short, is the exclusive truth, and neither is merely falsifying, though each might reveal things that the other conceals, particularly in the relation of the units of measurement to one another within each system. But the traditional measures yield a more beautiful and a richer experience, or rather—as things stand now—resist a brutal authoritarian simplification.

Any system of measurement is rationally arbitrary. The basic measures could be entirely different and no less reasonable or useful or true. For example, if the meter were 2.317 times as long as it is now, and the entire system of measures adjusted accordingly, the system as a whole would be no less accurate, no less rational (though no more), and no less useful. But the liter, the Celsius degree, the lumen are dedicated to the delusion that we can understand the world by reducing it to decimal notation, and are dedicated as well to producing the illusion that this complex, little-understood universe can be counted on your fingers.

There’s no particular relation of reality to a base-10 mathematics, as Panero points out. The world does not appear to us, or exist, in any relation at all to base-10 mathematics. If you gather up a thousand meters you get a kilometer: that bears no more relation to reality in itself than 5280 feet to the mile, or a base-12 system of inches and feet. Or I might assay the position that the 10x100x1000 system bears less relation to reality than more seemingly arbitrary systems, because the world is infinitely complex and by and large not symmetrical.

The metric system is dedicated above all to disguising its own irrational basis. And people have used it to demand this merely-apparent reasonableness from ourselves, and to force the world to reflect it. Perhaps it’s somewhat easier to learn and master than some other systems, but children ultimately do fine with whatever system they learn.

The traditional measures yield a more beautiful, subtle, more complex and richer experience of the one reality that both systems weigh or seek to describe. If so, they also yield a more truthful system, not because the metric system does not describe reality, but because it induces the delusion of comprehension, or seems to promise a fully comprehensible world, which is the kind of thing no system of measurement can deliver. And it encourages the self-delusion of people—such as the government officials who enforce it—who regard themselves as more rational than the people on whom it is enforced.

For the metric system, ironically, has become extremely imperialistic. Many people think it's obvious that it should be imposed on every society, including American and British society, by law. Indeed, it has already been imposed in the UK as a condition of entry into the EU. This is a sort of representational colonialism; it asserts that everyone must measure the world, must represent and experience it, in the same way. That is of the essence of oppression. And the assertion of universal rationality underlying it is politically problematic, and also false.

As a condition of the UK integrating into the EU, it was required to demonstrate the essence of the metric system: enforcement and capitulation. Measurement police started confiscating scales marked in pounds and ounces. I recall the response of one British butcher back around 2000: "They better bring big men." They did. Perhaps Brexit was inevitable from that moment. The Independent, reporting that butchers are beginning to measure in lbs again, quotes the UK Metric Association (whatever that is exactly) describing its preferred measures as "powerful and wide-ranging, a world standard and a proper system." A proper system to be enforced upon an improper universe and unsystematic persons.