Scott Pruitt's EPA is a disgrace. 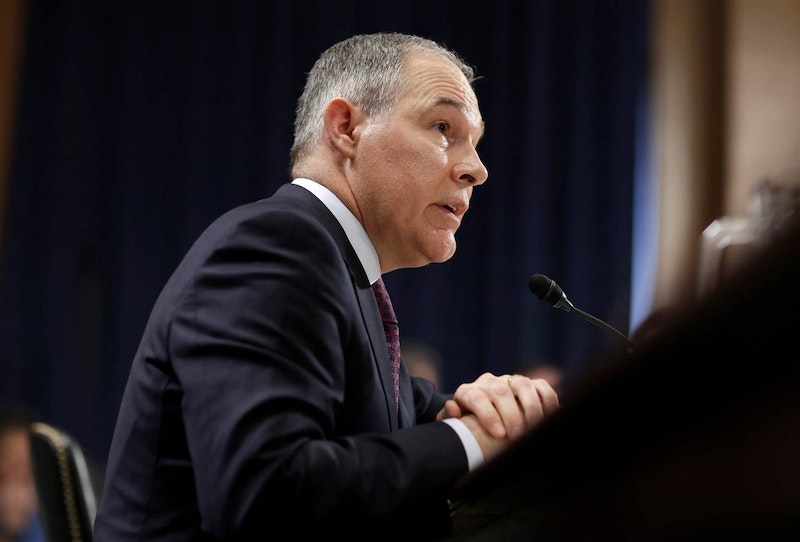 It’s been 10 months since Scott Pruitt’s confirmation as administrator of the EPA and after repeated written requests, phone calls, and 30 letters requesting policy information, the administrator finally showed his face to testify before the House Energy and Commerce Environmental committee. The joke on Twitter was posting a “Wanted Sign” with Pruitt’s face on it.

Soon after his confirmation, representatives were frustrated by his lack of cooperation. This is the longest an EPA chief has taken to come before a Congressional oversight committee since being sworn in. As reported by the committee, he’d reply to written requests for information with perfunctory five-sentence responses or disregard the requests altogether. Pruitt was grilled for an hour before he conveniently said he was requested to meet with Donald Trump for a White House meeting. Just another Trump diversion.

The committee was concerned with Pruitt’s lack of transparency. Despite a taxpayer’s bill of $58,000 to fly him around in private jets, the oversight committee had no idea who he’d been meeting with or where he flies. And when asked if he had installed a $25,000 private phone booth in his office he said yes. When asked if he used this private line to speak to the President, industry executives, or lobbyists, he refused to answer. Is this a further effort to isolate him from scrutiny? By many accounts, the EPA looks like an agency captured by industry.

This is another example of our government being dismantled. When asked how many official positions have been nominated and approved since taking office, Pruitt said one, himself. Thirty environmental rules have been delayed or undone, often with no legal or scientific justification and at the behest of industry, not science. When asked why the clean power plant and climate change scientific website data had been removed, Pruitt promised it would be added to the site again but in a more edited fashion reflecting the agency’s agenda, which is code for “I’m a climate change denier.”

The committee stance on this was that they felt Pruitt’s rejection of the scientific consensus that greenhouse gas pollution on global warming is well-known but would continue to await Pruitt's response to an April 7, 2017 letter requesting more details about his views related to the cause of global warming and the agency’s plan to repeal and replace the 2015 Clean Power Plan Rule. They stated that their review of the 2017 Repeal proposal only heightens their concerns.

There’s an unprecedented assault on the independent scientists, purging and sequestering many of them and replacing them with industry employees. There’s an erosion of funding for projects that don’t align with Pruitt’s anti-environmental agenda. After all, he’s still dealing with lawsuits against the EPA lingering from the time when he served as Oklahoma’s attorney general.

The scientific advisory board has been replaced with corporate industry leaders and as one senator commented, the scientists who are able to attend the meetings are prohibited from bringing their phones or even a pen and paper.

Ignoring EPA staff, Pruitt has handed over dismantling the Toxic Chemical Reform law, just passed last year, to the chemical industry. This undermines protections to the public health from mercury, methane, and other unhealthy substances, giving more lip service to clean water and public health and a nod to special interest groups.

Pruitt is determined to build an EPA by and for corporate polluters. He supposedly has the EPA getting “back to basics,” but apparently that doesn’t extend to basic human needs like clean air and water. Congress must hold him accountable. We can only hope the oversight committee will continue to demand transparency from “Polluting Pruitt.”