The Diversity We Cherish is Ripping the Nation Apart

Tribal factions are fighting over the country’s goodies. 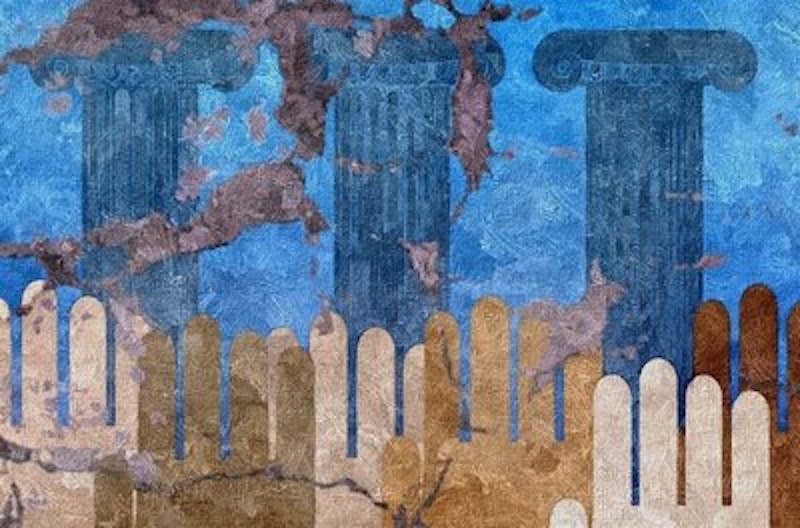 Take in a couple of holiday parties, have lunch with a few old pals, or tune in on the ladies at the next table, and eventually the talk will turn to the downbeat notion that democracy as we know it is whimpering toward its end, though the end may be near but it’s still far enough away to buy green bananas. The thoroughly icky thought is that democracies have never lasted very long before—anywhere—and there’s no reason why we should expect more staying power now. Our biases and demands outweigh our enlightenment, and the world’s power centers are populated by despots, autocrats, tyrants and maniacs—all armed and dangerous.

Democracy is as old as ancient Greece and Rome and as new as today’s emerging nations. America stands as its most durable model, the inspired assembly of selective fragments of success from previous failures. It was in Greece and Rome that constitutions were born. Aristotle contributed to Democracy, though he insisted women should not be allowed to vote. Plato was a doubter, and Socrates was put to death.

The loopy Diogenes flashed his lantern in search of an honest man, but he also walked on all fours like a dog to mimic raw nature. The Romans made sushi out of Cicero following the disruptive assassination of Julius Caesar. American borrowed heavily from the French social contract theory of Jean Jacques Rousseau. The scary thought of Dostoyevsky’s The Inquisitor might’ve been eerily incorporated into the invention of America—give people too much freedom and they’ll mess it up every time.

But America neglected one important lesson: The ancient Greeks required exist audits of their officials to make certain they didn’t benefit from public service. But back then, though, there were no tax shelters, lobbying firms, offshore accounts or Bitcoin to conceal ill-gotten gains. Nor was there Citizens United.

Today, America boasts to the world that diversity is its strength. Yet the strengths of a democracy are also its weaknesses. The diversity that we cherish is the very thing that is ripping the nation apart, turning neighbor against neighbor, rural against urban, state against state and even nation against nation. The battle of the sexes has taken its ugliest detour since Lorena Bobbitt took a knife to her husband’s appendage, claiming that he raped her. Diversity has divided the nation into tribal fractions, each competing for recognition and an equal share of the nation’s goodies.

Check a political map, and America’s two margins are blue and the vast space in between is red, the half-enlightened vs. the unenlightened. It is an irony of the post-Gutenberg era that we are blitzed with more information than it’s possible to absorb and more than half the nation lives in the eternal bliss of passive ignorance and the indifference of submissive faith over compelling fact.

America is no longer a melting pot where every new arrival strives to blend in and become a proud American. The nation is now a mosaic that encourages the assertion of ethnicity to burnish its stars and stripes. The great transformation occurred with the immigration law reforms of the 1960s wherein a loophole of unintended consequence changed the coloration and the makeup of the country.

It continues with the diaspora from the Middle East. And while America accepts, more or less, almost anyone, from any land, it still, in large measure, rejects its very own native born, people of color, as equal citizen-partners. It’s not what’s gotten, but who gets it that gores the civic ox. Creating opportunity for one is viewed as unfair advantage by another, often knocking the transcendent rhythms of democracy out of balance.

The nation has evolved, by necessity, to rely more on action by the courts than on the collective wisdom of its citizens at the ballot box. And the more that rights and privileges are bestowed on one group, the more they are taken from another. Justice contains its own injustice. The shift to government by judicial decree has occurred largely because Congress is failing to do its job, or, in some cases, overdoes its assignment, and relief is sought in the courts. The same can be said of the courts, with partisan packing the new antidote to resolving cultural differences, and gerrymandering, its legal companion, to assure its desired outcome.

A case in point: Everyone knows that Congress no longer hears the voices of the people but that its ears are cocked only to listen for the rustle of campaign dollars. That adjustment was necessitated by court decree in Citizens United, wherein the justices decided that corporations are people. So, the public gets the back of Congress’s hand and a Bronx cheer as Congress is enriched by the very court whose appointments it approves.

We have a president with 32 percent approval (in the latest Monmouth University poll) reversing a president who left office with 60 percent approval; 83 percent of Americans—including three of four Republicans—oppose deregulating net neutrality (but the FCC did it anyway); 88 percent of Americans favor stricter gun control laws; 52 percent of Americans believe the Republican tax cut plan will hurt them; 70 percent believe the climate is changing, and 60 percent see it as a serious problem; 69 percent favor immigration reform that provides a pathway to citizenship; 70 percent believe Trump is “too friendly” with Russia’s Vladimir Putin and support investigating their ties; and a sampling of a number of polls shows overwhelming support for hands off Social Security and Medicare. Congress just doesn’t care. Majority rule has been subverted by the boardroom few.

All men are created equal is a hallowed phrase, as far as it goes. Unfortunately for most, it ends right there, at the word created. Yet democracy is a constant search for common denominators. The race to equalize and bend the arc of the law to achieve it is a force against nature. And the danger exists that the more we apply the law toward equalization, the more of a threat to democracy we become. As T.S. Eliot warned, “democracy swings constantly between tyranny and anarchy.”

Yet Democracy, as fundamentalists declare, is not a gift from God. It was won by our blood on battlefields and framed by our forebears, those hell-raising rascals who’ve shackled us with a visionary document that regrettably did not see far enough. Wars raged across Europe and Asia and, for the most part, the oceans protected America against major foreign intrusion until science found a new way to overcome that shield. America’s ugliest war was the one we fought against ourselves on native soil that still carries the stain of recalled hatred.

But there’s hope, however slight. Democracy, unlike all those other forms of government, has a self-correcting mechanism. They’re called elections. They come and go in waves and repudiations, the latest being the revenge of the Democrats in blue New Jersey, purple Virginia and crimson Alabama. Analysis and punditry is abundant, so pick the story line that fits your purpose. Government, like it or not, is the one remaining adhesive that holds us together.

There’s a reason why a little tract, On Tyranny, has been on The Washington Post bestseller list for 33 weeks. It’s cautionary and instructive, a handbook of reminders lest we forget. Here’s a summary paragraph: “The Founding Fathers tried to protect us from the threat they knew, the tyranny that overcame ancient democracy. Today, our political order faces new threats, not unlike the totalitarianism of the twentieth century. We are no wiser than the Europeans, who saw democracy yield to fascism, Nazism, or communism. Our one advantage is that we might learn from their experience.” Merry Christmas and a Happy New Year.