Ron Fournier Can Be Foolish, But We’ll Let Him Keep His Job

The Kentucky Senate debate was politics as usual. 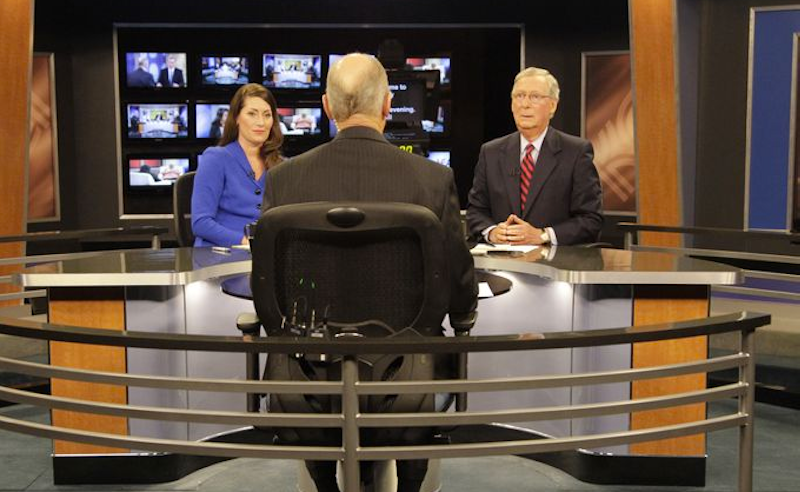 Reporters love gotcha moments, and try to manufacture them. Candidates hate gotcha moments, and try to avoid them. That's not because reporters are filled with virtue and candidates are filled with iniquity, nor vice versa. It's just because reporters gain money, prestige, and eyeballs when they can shout "gotcha!" and candidates gain money, prestige, and votes when they manage to avoid having "gotcha!" yelled at them.

For a good illustration of the dynamic, check out Ron Fournier's Very Serious, brass tacks, finger-wagging column yesterday at The National Journal. Fournier reported on the Kentucky Senate debate between Democratic challenger Alison Grimes and Sen. Mitch McConnell. If he were honest, Fournier's post would say that, as in most debates, neither candidate said anything of much interest, and the vast majority of the electorate was not paying attention. The headline should read, "There's Still A Kentucky Senate Election, Just Like There Was Yesterday."

But that's not the sort of headline that's likely to make anyone read Fournier's column, or make anyone say, "Ron Fournier, he asks the hard-hitting questions." So instead Fournier fulminates and blathers about how the debate was "dispiriting" for "voters growing tired of crass and corrupt politics."

And what does this crass, corrupt politics consist of? Alison Grimes won't answer questions about whether she voted for Barack Obama; McConnell keeps shilly-shallying on Obamacare, pretending that somehow the popular Kentucky health care exchange Kynect could survive if Obamacare were dismantled. "What's more disqualifying?" Fournier demands, "A Democrat who refuses to say whether she voted for President Obama, or a Republican who waffles on Obamacare and essentially calls it 'fine'?"

The answer is that neither is even a little bit disqualifying. It's not corrupt or crass for a politician to dodge a question. It's what politicians do; it's part of the job description. There are certainly times where politicians owe the public straight answers; lying about the reasons for going to war is not okay. But refusing to say whom you voted for? Come on. McConnell's waffling is arguably uglier than Grimes' inasmuch as he's misleading voters about how the healthcare exchange works. But most people are so thoroughly confused about how Obamacare works that not even Mitch McConnell is likely to befuddle them further.

There are a couple of things here worth reporting on, sans outrage. Politicians are always going to dodge questions, but which questions they dodge and how they do so can tell you some worthwhile things about their campaigns, or about what they think of their campaigns. Grimes clearly doesn't want to be tied too closely to Obama; that lets you know, in her estimation, the President hurts her rather than helps her. You could guess from that that she'll probably be interested in distancing herself from Obama at least somewhat in the Senate; if she wins she'll be a centrist Democrat, not a liberal one. McConnell for his part doesn't want to be seen as opposing Kynect, which tells you that he's aware that repealing Obamacare wholesale is a bad idea for his party. Obamacare, in short, is here to stay.

Fournier could have reported on that, but the problem is that neither of those stories is especially startling. Everyone already knows that Obama's popularity is low and that Kentucky is conservative. Everybody who's been paying attention knows that Republicans aren't going to repeal Obamacare. So Fournier is left railing against cynicism and corruption, pretending that Grimes and McConnell have behaved particularly badly so he has something to denounce.

I find Fournier's moral climbing here particularly insufferable; it's hard to resist calling it cynical, corrupt, and disqualifying. But it isn't any of those things, really. Fournier's just doing what political reporters do. They're all just responding to the incentives in our political system. Our Founding Fathers decreed, by accident or design, that every couple of years we would all be forced to listen to copious amounts of nonsense spouted by candidates and political reporters alike.