A Mild Prelude to Full Freak Out 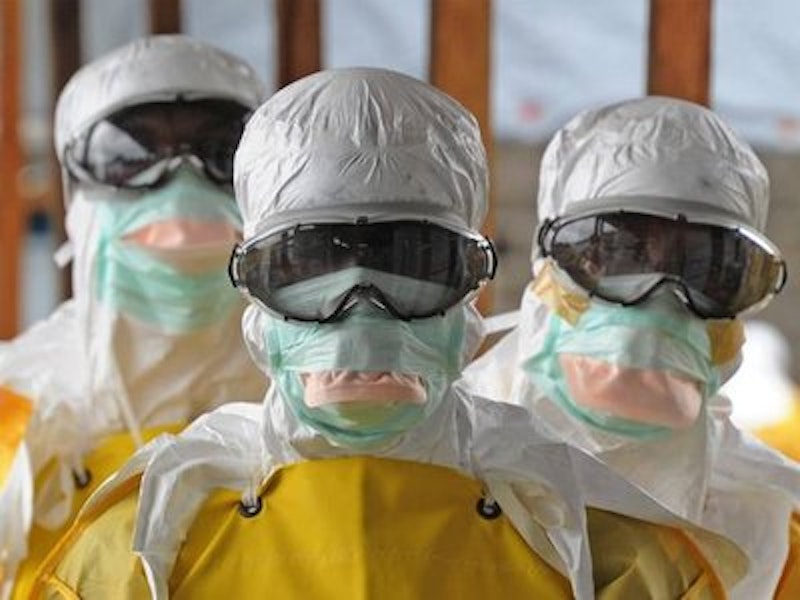 There’s probably nothing to worry about. That’s what I routinely told myself, up until a few years ago, when the symptoms struck: the heavy chest, the aching throat, the voice gone missing, the general sense of weariness. The signs, in deep autumn or general winter, of sickness. When I was younger, I could assure myself that the worst would pass without a visit to the pharmacy or the doctor, and usually, I was right; before long, I was back to normal. But since the flu kicked my ass around the block three years ago, my health is something I’m significantly less sanguine about. I consciously dress for the weather, drink orange juice daily, take my vitamins regularly, and the second CVS throws up those iconic red-and-white “flu shot” placards, I’m there.

This whole Ebola thing has upped the ante. When Ebola re-emerged a few months back, the threat it represented seemed purely benign. Surely, conventional wisdom held, state-of-the-art medical technology and practice will wipe that shit out before neighborhood polls shut down for the summer. Then that didn’t happen, as the disease lingered persistently on the fringe of our 24-hour news cycle of outrages and inanities.

The result, on a personal level, has been subtle but pervasive despite the fact that I reside in a very small city that I rarely leave. I’m washing my hands with more vehemence. At the bank I’m taking advantage of the hand sanitizer without quite being aware of it. I’m going in for second doses of Vitamin C and Quercetin at bedtime. Returning from a weekend trip to Austin earlier in the month with a weird, profusely bleeding wound on my leg, I experienced a weird, low-level wig-out that faded when the thing finally began to heal.

At last week’s Poetry Under The Poetry meeting, it was startling and uncomfortable to realize that the room was more crowded than usual. There is something scary about interacting with friends, acquaintances, and family members—in person or via Skype—who are dog-tired and haggard; all of a sudden I’m worried about everyone. Last weekend Mom was battling a malady, and it was difficult not to picture her wasting away in an Ebola quarantine ward—though a slowly rising despair over the insolubility of human existence may be equally to blame here.

As a world, we’ve been here before with spreading or new diseases that we’re struggling to understand, and too many books and films to name have preyed on the existential dread that contagion engenders. This time, though, there’s an edge to the fear, largely because Ebola isn’t obeying the rules that politicians, doctors, and CDC officials have repeated ad nauseam, and because despite the acceleration of social media in the years since the bird flu was on everyone’s lips, nobody’s really freaking out here. A certain weary tension can be detected in the tenor of callers to radio shows, but generally Ebola discussions never go into depth or last beyond five minutes. Meanwhile, Ebola seems to be mutating and adapting while the official party line is that it can’t be contracted beyond intimate contact with a sufferer or someone who is particularly stricken. Nurses and doctors ensconced in Personal Protective Equipment are coming down with Ebola either because 1) the Personal Protective Equipment ironically shields the wearer but is complicated to remove without infection resulting or 2) we’ve drifted into some sort of some bizarre Twilight Zone/Fringe situation that’s inevitably gonna get stranger.