The New York Times reporter is a jumble of confusion, arrogance and condescension. 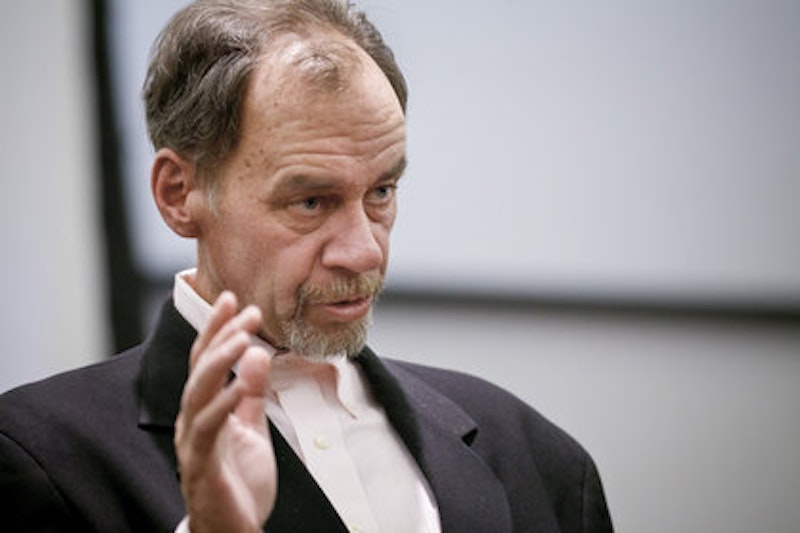 Is it possible that New York Times media reporter David Carr doesn’t remember articles he wrote just two months ago? The charitable answer to that question would be yes (the break-neck pace); the more cynical response is that he just doesn’t give a shit and, as a survivor of the diminished Times, feels justified in speckling his purplish prose with unbridled arrogance.

On Monday, Carr wrote a beaming piece (if dripping with condescension) about what he perceives as a rejuvenated Washington Post, hailing owner Jeff Bezos’ civic-minded investment in 100 new employees this year, and editor Marty Baron—tapped in 2013 by the Graham family regime—for “push[ing] the newspaper back into the conversation.”

Just what exactly that conversation is Carr doesn’t say, but we’ll assume he means the chatter within the media industry, which naturally is just about the most important conversation in the country. Carr writes that under Baron, the Post has broken a number of important news stories—the Secret Service scandals, political corruption in Virginia and its Edward Snowden articles last year, which earned the organization a “prestigious” Pulitzer Prize—and has become “bumptious” instead of “boring,” although it doesn’t resemble the “pirate ship” that Ben Bradlee presided over. The following noxious sentence sums up Carr’s delusion that his own newspaper still really, really matters: “Good news about journalism is as rare as Beltway bipartisanship, so watching The Post’s return to the big-boy table has been fun to watch.”

It goes without saying that The Times sits at the head of the “big-boy table,” even if no newspaper in the United States has the need these days to wear “big-boy” jeans.

Yet on August 14, Carr’s story in the Times’ business section was far gloomier, as he marked the one-year anniversary of Bezos' purchase of the Post. “[Bezos’] vote in confidence in the future of print and serious news was seen by some—including me—as a sign that an era of ‘optimism or potential’ for the industry was underway. Turns out, not so much—quite the opposite really.” He then went on to detail the spinoff of print properties by Gannett, Tribune Company and E.W. Scripps, excoriating Wall Street financiers (who else?) for demanding return on their investments. Carr did give a one-hand clap to The Post, which he said “seems fine,” but absent is the over-the-top celebration offered in his Oct. 6 story. Think about it: on Aug. 14, Baron’s stewardship of The Post was well underway, the Snowden stories were published and Bezos’ hires had taken place. Yet that reality didn’t fit the “narrative” or “conversation” that Carr wanted to invoke, so it was skipped. Furthermore, Carr doesn’t describe the positions of the 100 new Bezos employees: how many are on the editorial side, as opposed to tech support, digital advertising sales, or public relations? I’ve no clue, and Carr isn’t letting on, if he even knows.

Buried at the end of Carr’s article is this nugget: “[L]ast month, the company announced draconian cuts to pensions, like eliminating medical benefits for retired employees. There was also a freeze in a defined-benefit plan for managers with an eye toward imposing the same on The Post’s union employees.” That doesn’t seem so “big-table” to me; then again, Carr, even in his labored happy horseshit about the competition between the Times and Post, doesn’t even note his paper’s announcement on Oct. 1 that it would lay off (or buy off) 100 newsroom employees, and possibly more, as well as the shutdown of its mobile app NYT Opinion.

At least Dana Milbank, The Post’s I-Can’t-Help-It-If-I’m-Turning-Into-Maureen-Dowd political pundit/”humorist” was happy in a tweet yesterday morning. I guess Milbank, the obnoxious Post vet, was just overwhelmed by gratitude.

It could be that Carr’s just sick of writing obituaries for the industry in which he’s built a career, and so, like throwing at a dartboard, he picked The Post to prop up. Or maybe, recalling a song that was a hit in Carr’s youth, his take on the media is just a ball of confusion.