Liberal critic decides it's time to line up a legacy for the President. 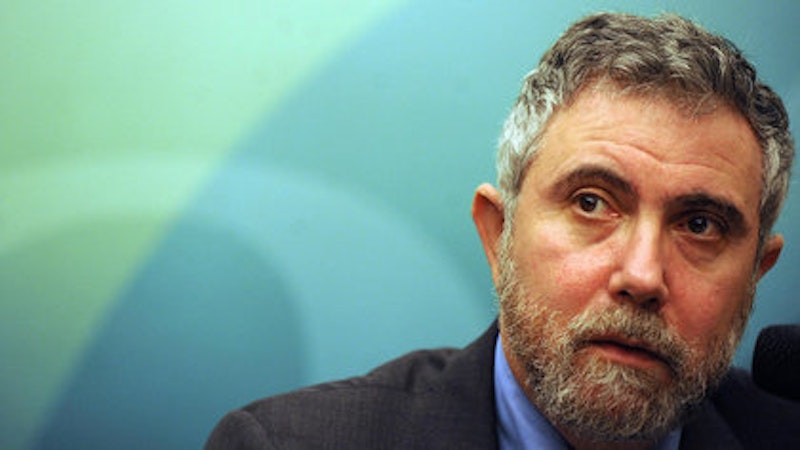 I guess the new figures for Obamacare did it. Paul Krugman has now declared Barack Obama a success. Here's the money quote from Krugman's article in the latest Rolling Stone: “Obama has emerged as one of the most consequential and, yes, successful presidents in American history.” Why “emerged,” given that Krugman's evidence mainly dates from the early Obama years? Because for a while it looked like Obama might cut entitlements if Republicans would agree to raise taxes. After several months of high-profile dicking around, the Republicans made it clear they’d agree to nothing. Obama let entitlements alone and therefore was spared a giant blot on his record. Add a successful first year for Obamacare and you have greatness, or at least high degrees of success and consequentiality.

Obama has stumbled backward into Krugman's hall of fame. He couldn't do what he set out to do—mess with millions of people's government income to shore up long-term bookkeeping. He couldn't do it because the party system in America is busted. That is, the system is very good at nurturing two well-funded and high-profile political parties, but they fight like crazy because one of them (the GOP) actually is crazy. Obama thought he would get the two parties working together. He had no idea. Six years into the age of Obama, there's no such thing as post-partisan and no Grand Bargain. There's just a president who accomplished quite a lot by having a big legislative majority for a couple of years.

In theory, Obama got elected to make America post-partisan. That had always been his calling card, as noted by observers from Ezra Klein to Cornel West to the racist Steve Sailer. When people saw the Hope and Change posters and felt uplifted, what hoisted their spirits was the thought that we could rise above it, the “it” being division. No more getting hung up on race, no more squabbling in Washington. But most people don't vote because of the posters, which is just as well. Obama believed his own guff while most of his supporters were merely hoping for a change from the Republicans. The swing voters would’ve been happy enough if Congress passed legislation and cleared appointments; that's their idea of bipartisanship, things getting done and never mind which side voted for what. But Obama thought he was on to something special. Through his first three years, he wasted time and energy trying to get the other team to join his team so the political system could heal.

This has been called weakness on his part, and it was indeed silly. But at crucial moments he was the key Democrat who held firm. Obamacare, the auto bailout, the killing of bin Laden—they all happened because Obama told his fellows at the top to hold the advice, he was going forward. Sen. Elizabeth Warren, a Democrat who deplores Obama's handling of Wall Street, still gives him a lot of credit for her one most important success: “If Barack Obama had not been president of the United States we would not have a Consumer Financial Protection Bureau. Period... he was the one who refused to throw the agency under the bus and made sure that his team kept the agency alive and on the table.”

A Clinton fan once told me that Obama must’ve had a giant ego to think he could get major bills passed with Republican votes. No Democrat had accomplished that since... I forget when, but it’d been a while. Of course, Obama has a giant ego. He thought he would be the first black ever to become president. He's an introvert and built a bit droopy, so people think he lacks water pressure. But he's got plenty. That's how you get to the White House, no matter what happens once you're there. Reagan, that big-shouldered cluck, kept ducking his head and smiling, but he insisted that taxes would be cut so the deficit could be balanced, and so they were. Cut, that is. The deficit got a lot worse, since there wasn't much money coming in. Reagan had been all wrong. He had his favorite idea that the old guard opposed and that he drove through, and it was a misstep. Obama had his beautiful idea too, his inversion. For Reagan, lower tax rates to get higher revenues; for Obama, get your way by inviting Republicans on board instead of strong-arming them.

Politically Reagan paid no price at all, since voters don't care about the deficit if inflation and unemployment aren't too bad. Obama, on the other hand, has caused himself much grief, and the rest of us too. The sequester is a terrible mess to wind up in. But his silly idea about the big thing he alone could pull off—the grand post-partisan healing—came with unrealistic notions about saving the car industry and getting health care reform past the filibuster. They got results and now look: Paul Krugman has declared him historic.

Gay footnote. Krugman's article contains a passage that I find very off: “Before the Obama presidency, Democrats were in a kind of reflexive cringe on social issues, acting as if the religious right had far more power than it really does and ignoring the growing constituency on the other side. It's easy to imagine that if someone else had been president these past six years, Democrats would still be cringing as if it were 2004.”

The off bit is where it says, “It's easy to imagine,” etc. For me it isn't so easy to imagine what he lays out, and Krugman gives no reason why it should be. Is Hillary a big wuss on gay matters? I remember Barack Obama in the same civil-union crouch as everyone else until Joe Biden opened his mouth one fateful morning in a TV studio.

As Krugman says, at the very start of his paragraph (!), “Barack Obama has been more a follower than a leader on these issues.” The country changed and Obama was for that change, not against it. Good enough.