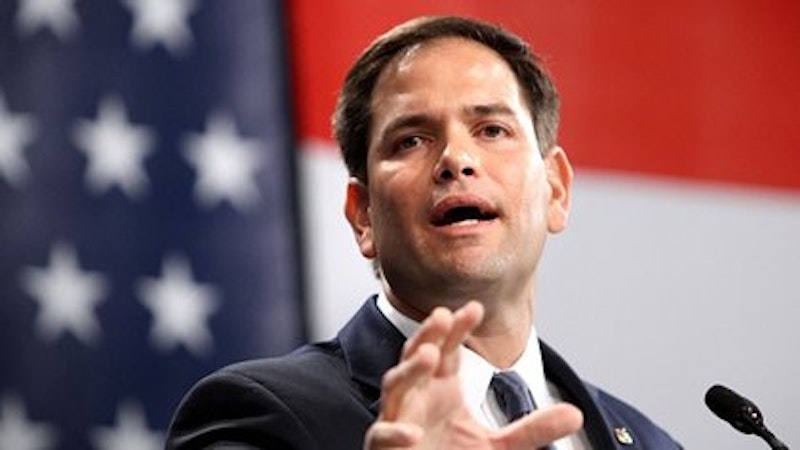 Mike Huckabee, the cornpone grifter who once captivated Christian Right citizens, has threatened, in the wake of the Supreme Court’s eminently sensible decision to swat away opponents of gay marriage that he’ll leave the GOP and become an independent. If the Party’s fortunate, he’ll make good on that promise. It’s sanctimonious moralists like Huckabee, Rick Santorum, Ted Cruz, Rick Perry, Sarah Palin (thank the lazy media for mindlessly keeping her, and Donald Trump, for that matter, in the news) and any remaining televangelists that give ammunition to Democrats who label those who don’t agree with their left-wing agenda as wackos.

On Monday, Bill Scher wrote an article for Politico, “How Republicans Lost the Culture War,” that summed up the recent—finally—capitulation of GOP elected officials on social issues that sensible people (of both parties) realized were already settled. Can’t argue with Scher that parts of the “culture war” are over—until new arguments gain prominence, such as the hysterical Yes Means Yes decree in California over sex on campuses—but his explanation of how that happened is influenced by his liberal goggles. Scher writes that Republicans “stopped being savvy on abortion,” got “weird” on birth control and “bet wrong” on gay marriage. I suppose it’s disappointing to Scher, and like-minded journalists, that these societal controversies have ceased to matter to most Americans, but I take the view that Republicans finally understand that brow-beating voters with antiquated values is no longer a compelling platform.

Rather than “losing the culture war,” it’s my hope that GOP strategists, looking ahead to the 2016 presidential election, are advising potential candidates to abandon the tenets of sticking-their-noses-in-our-business scolds like Huckabee. Economic conservatives have long groaned when the issue of abortion is given priority in a campaign. Really, wasn’t this mostly settled in 1973, with Roe v. Wade? Scher’s correct that some Republicans made contraception a bullet point a couple of years ago, but that was simply a tactic to sway the public against the Affordable Care Act.

I don’t at all favor Obamacare, and the bureaucratic nightmares it’s created—while typically rapacious insurance companies profit by screwing around with health plans—but that stopped being an issue for me on June 28, 2012, when Supreme Court Chief Justice John Roberts, in an odd display of conciliation, sided with his liberal colleagues and upheld Obama’s signature legislation. Game over. Republicans would’ve been wise to put that hobgoblin on the back burner in campaigns until they elected one of their own to the presidency, when Obamacare could conceivably be fiddled with.

As for gay marriage, please. I’ve never been able to comprehend why people care what fellow Americans do in their private lives. Many Republicans, and some Democrats as well, hold the belief, allegedly on religious grounds, that marriage is reserved for a man and woman, period, but they’re in the minority. It’s actually fairly amazing that it took so long for Obama to “evolve” on the issue, but I suppose that was a political calculation, since I doubt he cares one way or another. (Similarly, on abortion, does anyone really believe that Presidents Reagan and Bush, a generation ago, held more than benign pro-life views?)

The Republican field for 2016 is muddled, with hardly any analyst making book on a front-runner. (As opposed to the Democrats, where the world-weary 90s throwback Hillary Clinton remains Anointed, even though she’s in hock to the dreaded 1%. I’d be surprised if Democrats disappointed with Obama’s failure to deliver on populist issues will roll over so easily for Clinton; the Elizabeth Warren groundswell starts in earnest next April.) Anyway, the best candidate, Jeb Bush, is out because of his last name; Rand Paul, while attractive to voters who value privacy and hate excessive government regulations, frightens those who fear his isolationism in an economic global world; Rep. Paul Ryan’s yesterday’s news; and demagogues like Cruz and Santorum won’t last past Iowa.

Right now, that leaves Sen. Marco Rubio and Wisconsin Gov. Scott Walker, who both could run compelling campaigns. Rubio’s hurt by his similarity to Obama—young, lacking executive experience—but his potential ability to narrow the Hispanic margin in a general election is no small attribute, and it doesn’t hurt that he’s from Florida. Walker has to win reelection next month, and not just by a percentage point, but if that happens, the GOP bigwigs are bound to trump up a governor who’s withstood constant, vicious attacks from the left and is still standing. Walker has wisely tamped down his pro-life stance, and if he’s not Mr. Charisma, so what? Obama might’ve temporarily immunized “boring” candidates, and Walker’s background—college dropout, not a millionaire—is a draw for citizens who are described by affluent pundits as “ordinary” Americans.

Finally, on the topic of culture wars, immigration—not gay marriage, pot legalization or abortion—is today’s hot topic. It’s my hope, probably quixotic, that some candidate will have the guts to explain to the electorate that immigration reform, despite the headaches, is vital to our economy, morally correct, and historically consistent with the founding and growth of the United States.