In the Land of the Watusi

Ebola panic: justified (but not for the right reasons). 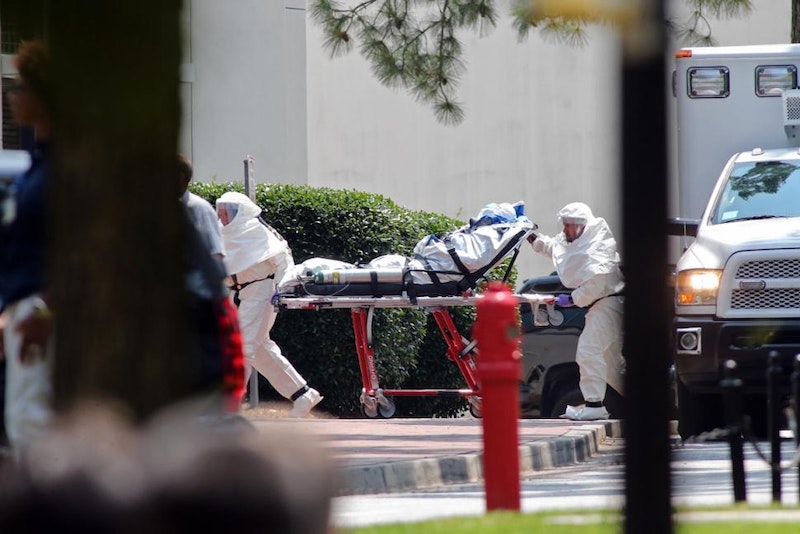 People make jokes about Ebola because the name is exotic/bizarre/silly, and it’s a good sounding word, resonant, easy to incorporate into asides and more involved zingers. The Drudge Report was leading with yesterday's headline “AFRICA: IN THE LAND OF EBOLA." This week, the media’s preoccupation and panic fed a xenophobic chunk of citizens that want the borders closed, using language couched in racism and ignorance, as if Ebola were a problem festering and suffered solely in West Africa. So of course we get the stream of op-eds that point out how problematic our perception of Ebola is. I rolled my eyes so hard I stayed awake for two days, coughing “aagasha! Does everything have to be a fucking social justice issue?” Because when I hear about Ebola flying into Dallas, and all across the country now, apparently, I think about The Stand and which page I would want to bail out on—probably somewhere before the daughter sees her father’s bloated corpse rupture mucus and gas and noxious fumes as she prepares a makeshift burial for him in their yard, the world a wasteland.

Little did I know how much Fox and CNN are feeding into the anxious and the ignorant, hosting quack scientists that say it could become airborne, like, really soon. “IN THE LAND OF EBOLA” is particularly dumb but typical of Drudge’s old Hollywood melodrama, though I guess even if it’s shtick, you’re still spreading and feeding ignorance to people who don’t know better. “IN THE LAND OF EBOLA” sounds like an old Roger Corman movie. Ebola is super-ethnic. Phonetically, it’s a silly word, flamboyant and upbeat, like a dance move or a small cat. This has a lot to do with what people joke about: it’s a funny sounding word, and those same outrage trolls deadpanning, “Are you people seriously making jokes about Ebola when there’re people vomiting blood and dying from diarrhea?” are missing the cause of it entirely. Anxiety makes people crack nervous jokes. No matter how many infographs or sanctimonious articles admonishing people for even talking about Ebola in the United States reassure us that our chances of becoming infected are slim to none, anything could happen, and an abundance of caution is good when you’re dealing with a potential plague.

I just don’t want to get it. Would you like some Ebola? See, it’s so easy, all those vowel sounds, I can’t help myself. Not everything has to be fought in the arena of social justice—if aliens landed on Earth tomorrow someone would say it was problematic. Isn’t this how Independence Day ended anyway? Or was that Signs?