Mitt Romney Won't Say This To Your Face, But...

He loves you, America. 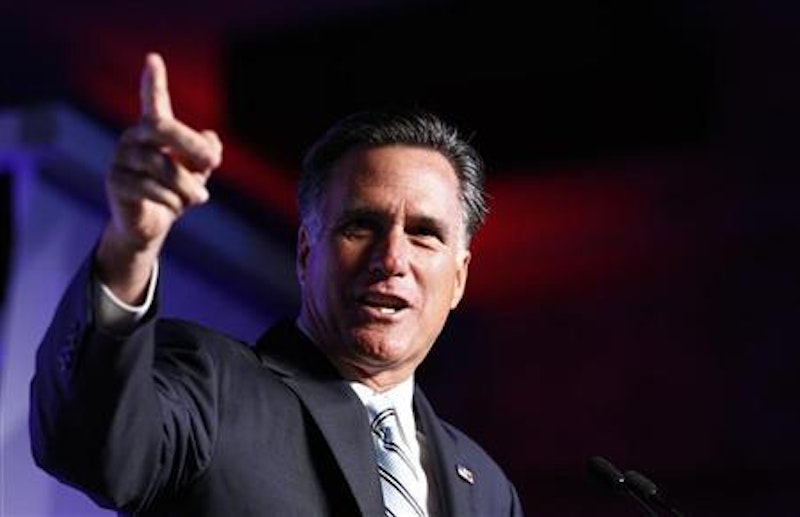 The sad thing is that he sounded confident. Mitt Romney was talking to friendly people in a Boca Raton mansion; they had paid $50,000 to be in the room with him. He had the nomination locked up, and now he explained the campaign that laid ahead, his strategy. Possibly he didn't think his audience knew much about politics. At one point he gave the big news that many political consultants get work abroad.  And when he talked about swing voters, he didn't say that most campaigns go after swing voters. He dressed up the truth with some apocalypse. To paraphrase: America's voting public had degenerated to the point where only about half of it was worth a damn, either as voters or people. Because of the population's great lump of government-corrupted people, the Romney campaign had to search carefully for the few votes that would put its side (presumably, the nation's worth-a-damn side) over the top.

Romney didn't know that some spy had parked a camera among the water glasses. The resulting footage was handed on to Jimmy Carter's grandson, who handed it to Mother Jones. The result was that on Monday night Romney suffered a tic explosion while on national TV. He'd called a press conference to explain to America what he'd been saying behind its back. He couldn't find much to say but kept talking: “Getting people jobs again… direction of the country… able to pursue their dreams… into the middle class… more elegantly than, than I did in a setting like… and so, I'm sure, I'm, I'll point that out as time goes… and the person who has the material …”

That last bit was part of a plea to the camera planter. But the whole conference was like a plea. He was Romney the premature ejaculator, the desperate dolt trying to jabber his way out of humiliation. He knows he's guilty; maybe he wants to get caught. In the meantime, he gestures like it was scary for him to have hands, like he has to keep them apart or somehow his pants will rip or his face will drop off. The hands want to be together; his arms lay themselves out, side by side, and Mitt dives to get his head between them. Yet his eyes never leave the reporters; he has to do all the above while maintaining eye contact. And hoping nobody asks him about his hands.

Now there's a president: He walks off stage, smile fixed on his face, while a reporter calls a question that ends in “... core beliefs?” I think the reporter wants to know if Romney believes what he said at the fundraiser. A good question. Romney is a man of numbers and data, but his alleged picture of the United States is slovenly. It shows a big thing called government, and attached to that is a mass of semi-jellified humanity. This combined entity takes up too much space; it threatens to swamp the free-living people who generate profit. How much space does it take up? Romney figures it has 47 percent of the U.S. population. Why? Because Obama is rating in the high 40s in opinion polls and because 47 percent of adults don't pay federal income tax. Kismet. The congruencies line up to transform the figure into a third statistic, the all-important figure for what percentage of the United States is too rotted by government to vote right.

Liberal journalists have pointed out that Romney's math doesn't take into account federal payroll taxes, or the many nonfederal taxes, or the role of Ronald Reagan and George W. Bush in slicing down lower-bracket taxes. I'll just point out that the math isn't math. It's more like the numbers equivalent of a pun. It's like trying to prove therapy is bad because “therapist” is “the rapist.” Either Mitt was hustling his crowd or we have found a tender, protected space in that brittle man's metric-driven sense of the world. Like the Radio Shack owner in Chandler, N.M., listening to Hannity or Rush, like the magnates who could afford $50,000 to look at their candidate, Romney is one of the makers and he's being exploited, and the cause of his exploitation is the great degraded-population lump that must exist out there someplace. This is a cry from the right-wing soul. Once it's out of your mouth, of course, it sounds like you're talking about most Americans the way most Americans are accustomed to talking about welfare recipients.

The big quote: Here it is: “There are 47 percent of the people who will vote for the president no matter what. All right, there are 47 percent who are with him, who are dependent upon government, who believe that they are victims, who believe the government has a responsibility to care for them, who believe that they are entitled to health care, to food, to housing, to you-name-it. That that's an entitlement. And the government should give it to them. And they will vote for this president no matter what… These are people who pay no income tax.”

Mid-range forecast: Someday a candidate running for president will be caught picking his nose, really deep. That candidate will be Mitt Romney; I guess he's planning it for October, during a quiet stretch of the second debate. Obama: “... and as a nation we can lead in the knitting up of these fragile links, to restore [noises from the audience]… What?” Obama looks to his left. There is Romney, and it's a ghastly sight. Moments pass before Romney remembers where he is.

Big donors stop giving, Rush and Fox launch a chirping series of comments about Mitt's shortcomings. They're writing him off so the fans can focus on something bright, the man who isn't losing the election—gallant Paul Ryan. Ryan stages a last stand against the Obamaite vote-based oppression, some final burst of events that climaxes with an outdoor speech attended by mobs outside Milwaukee. The ticket carries Wisconsin, and this is puffed as Ryan's triumph.

Long-range forecast: In the weeks after the election, Romney is allowed a respectful interview on The O'Reilly Factor. Then his name is never spoken again.