They're harder to separate than they used to be. 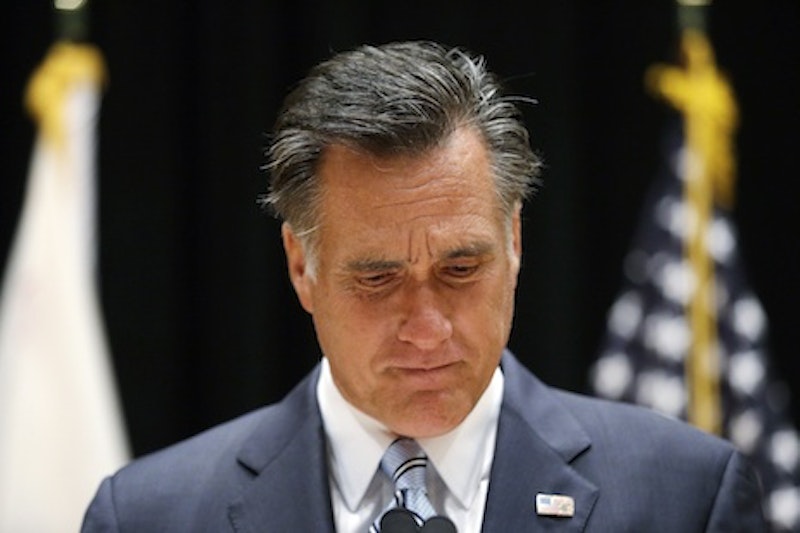 Yesterday, Ta-Nehisi Coates pointed out that when Mitt Romney damns half the electorate as shiftless freeloaders, he's plugging into the remnants of the Republican Southern strategy. Not so long ago, politicians could just promise to oppress black people as a vote-getting strategy. Later they had to be trickier, bloviating about welfare queens and crime while winking and pointing at those lazy Others without ever saying their names. But now, Coates points out, even that's too much.

In all this you can see the insidious and lovely foresight of integration which, at its root, posits an end to whiteness as any kind of organizing political force. I would not say we are there. But when the party of white populism finds itself writing off half the country, we are really close.

Coates attributes this transformation to integration. I don't argue with that, but I do think that one particular kind of integration has been especially important: the integration of the Oval Office.

Romney, in front of his wealthy donors, explicitly said that Obama voters are lazy government dependents. In America's not-especially-subtle racial calculus, the link is pretty clear. The federal government is imposing its lazy ideology of lazy blackness on the virtuous hardworking citizens of the US, just like it's done ever since Reconstruction. Throw those lazy (black) bums out!

But something has gone wrong. We, and that's not just liberals, and not just blacks, but everybody, elected a black man to the Presidency. The country as a whole is represented by an African-American. And as a result, when a subterranean effort is made to rally the majority against the minority, the result is that more than half the country (approximately) identifies with the minority.

And as a result you get lots of white people reacting to an essentially racial attack as if they have been personally, not just offended, but assaulted.  Jonathan Chait says that he actually can see his way to hating Mitt Romney for the first time. Andrew Sullivan indulges in entrepreneurial outrage:

He's describing half the country as parasites, bleeding the productive half dry. Half the country. He includes me, an Obama supporter, who pays three times the tax on my income that Romney does, who immigrated at 21, whose parents never went to college, and whose blog now employs six other people. You know what, Mitt? Fuck you.

And so on. As Coates says, Romney is using the Southern strategy on white people, and, as you'd imagine, the white people don't like it one bit. Electing a black president didn't transform the nation; it didn't even put an end to racist political rhetoric for all time, I'm sure. But it has made it much, much harder to use race as a wedge. A country that has elected a black president is a country that is—almost—going to identify with black people. In the bonfire of Romney's self-immolation, that's perhaps the cheeriest log on the pyre.