Romney's Tax Returns Will Tell Us Nothing

But not releasing them tells us a lot. 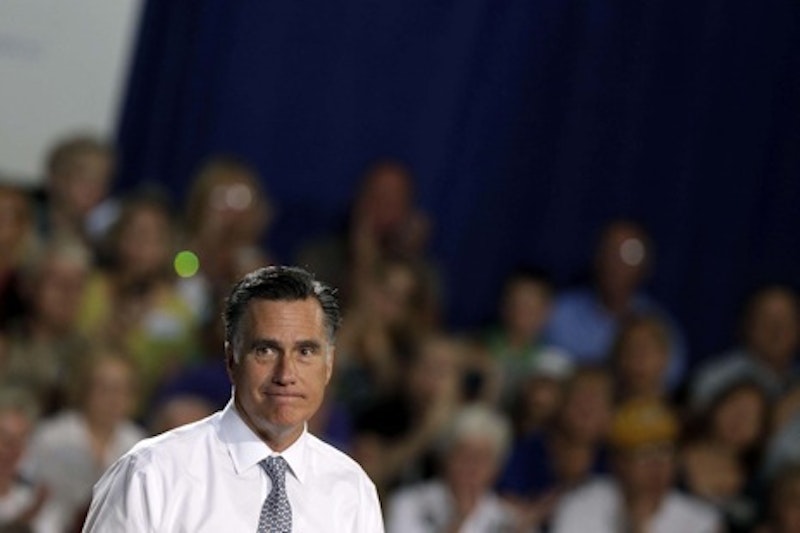 Polls come, polls go, memes blossom and dissipate, and ads pile up on the airwaves. But one constant remains in this long presidential campaign slog. Mitt Romney has not released his taxes.

It's been standard procedure since the 1970s for candidates to release tax returns. Romney's decision to release only his 2010 and 2011 returns has, therefore, prompted understandable and bipartisan speculation. It's been a steady source of negative news stories and distracting questions. So what makes it worth it to keep them hidden? As conservative columnist George Will put it, “The cost of not releasing the returns are clear. Therefore, he must have calculated that there are higher costs in releasing them.”

Senate Majority leader Harry Reid claimed that a source told him that Romney has not paid taxes for 10 years. Reid says he heard this from an anonymous source, but it seems just as likely that he talked to an evil munchkin, and/or that he's simply making shit up because he's a shameless and despicable partisan shill. Other more responsible, less soulless commenters have suggested that Romney might have paid no taxes in one year (http://www.businessweek.com/articles/2012-07-17/whats-romney-hiding-in-his-tax-returns), or that he might have taken advantage of an amnesty program for offshore accounts.

Any of this would be somewhat embarrassing, but would it really be that embarrassing? Even if Romney paid no taxes at all for 10 years, would the fallout be worse than the current situation of rampant speculation and general mockery? Taxes are pretty fundamentally boring to just about everyone. If the tax returns showed that Romney kept a bevy of secret mistresses or that he was running a prostitution ring or that he was secretly funding the Communist regime in Cuba or that he tortured baby ducks, then, yes, that might damage his standing among crucial Puritan anti-Communist duck-loving swing voters. But his tax returns aren't going to show any of those things. So who cares?

Peter Beinart made this argument recently for the Daily Beast (http://www.thedailybeast.com/articles/2012/08/06/mitt-romney-s-tax-returns-are-irrelevant-to-the-presidential-race.html). Beinart insists that the debate over the tax returns is a partisan distraction from the real issues. "This country is in the middle of a profound debate about whether the federal government should try to significantly regulate capitalism," he says, and liberals need to focus on that debate, not on what how rich Romney is, or on whether or not he paid taxes.

I'm not exactly sure what world Beinart is living in, but back here in the US, we're not having a profound debate about jackshit. We're having a presidential election, which, like most presidential elections, is about how likable the candidates are and about whether people do or don't have jobs. You can certainly whine about the fact that political parties and the American people don't seem to care about policy. But the fact is that the race is set up to be a popularity contest, not a policy referendum. Under our masterfully devised system of checks and balances, presidents have only a limited ability to enact any particular platform. Thus, a vote can't be a vote for a policy; it's only a vote for how much you like or don't like the grinning guy in front of you.

Which is to say, you vote on character. And in terms of character, it seems to me that Romney's tax returns are important—not because there's some sort of bombshell lurking in there, but because there really probably isn't.

It's almost impossible to conceive of a revelation in the tax returns that would make any practical difference in the presidential campaign. Therefore, the only reason Romney logically has for not releasing them is that he doesn't feel like it. He doesn't want the American people to know about his finances not because it would hurt his electoral chances, but because he just doesn't want them to. His default setting is non-transparency. He's willing to endure bad press for the sake of the basic principle that the American people, his prospective employers, don't have the right to know who he is or what he's doing. He'll tell us what he thinks we need to know, and if we don't like it, that's tough.

To be fair, the Obama administration has a miserable record on transparency, the Bradley Manning case being the most extreme and depressing example. But Romney's stubborn contempt for the people he claims to want to serve suggests that if he gets the chance, he will be even more totalitarian, high-handed, and arrogant than his predecessor.