Dreamboat, You're the GOP's New Future

Paul Ryan looks like the Music Man and he's honest as an ad on basic cable. 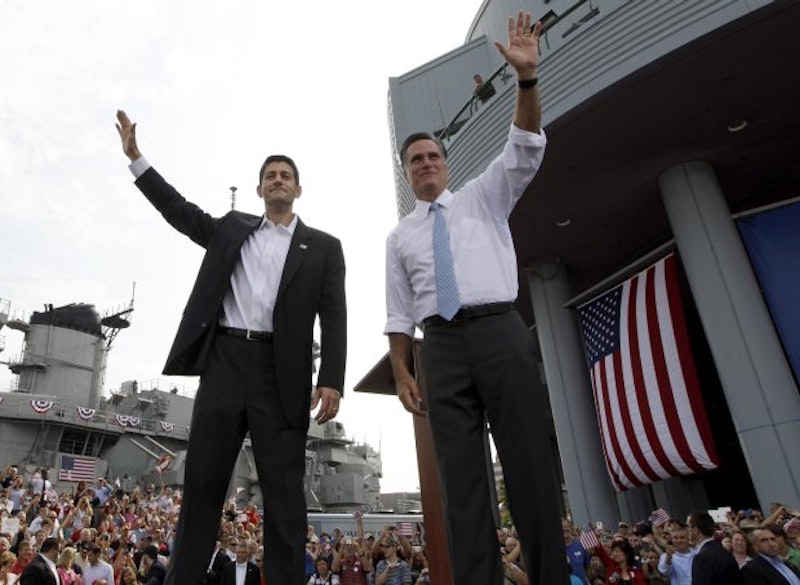 If the '08 crash had been caused by government debt, Paul Ryan would make so much more sense. If the crises in Spain and Ireland had been caused by government debt—well, that would help too. He's got Greece and maybe Italy on the side of his story line. When he says, “Look, there are the consequence of fiscal self-indulgence,” he can point at a pocket nation of 10 million people and a discombobulated patchwork state led by Silvio Berlusconi. When we say, “Here's what private finance does when you take off the leash,” we can point to everything else, including our country.

In the end this fact will probably defeat Paul Ryan. Swing voters will give his message a long and attentive listen. They'll go for it, but they won't buy it. Ryan plays that tune people like to have in their heads: “I'm a free man, I'm an independent man, I'm the man who calls my shots,” and so on. It makes them feel better, but they know from experience that it's more an attitude than a working guide to life as it's lived. Now, with his star debut, Ryan will sing that song and make it a hit all over again. But he won't win the election with it.

Of course, saying he's like the Music Man is a compliment. You could also say he was like a commercial on basic cable. You have to be very careful about the fine print, as with hair-growth ads (or the case for invading Iraq). When Ryan wanted the Congressional Budget Office to size up his plan, he didn't ask them to look at the plan itself. He had them look at the results that Ryan said the plan would bring. From that their job was to estimate what these results would mean for the country's budget. If tax revenue as percentage of GDP went up, would that be good for the budget or bad? Good, the CBO said. It's like the Build Your Wealth Investment Co. established that adding $80,000 a month to your household income would be a good thing.

Speculative predictions. After November we'll hear from Republicans that at midsummer Obama had a staggering lead and a powerful organization. We'll hear that, after all, Ryan wasn't the candidate, just the man for VP, so his message couldn't carry as much weight as it should have. Even so, they'll say, he almost pulled it off. So the Republicans will spend the next four years in a pack behind Ryan. They will march him right into the nomination and deflect anybody else. It's possible that this operation might even go smoothly. The troublemakers in the party have been his bunch; now they've got what they wanted and could get a lot more.

The Republicans like to have somebody in charge. They're the party of head-crackers and meetings that end on time. But this year and last time around their presidential primaries have been shambolic. A hard-fought campaign is one thing, as with Obama and Hillary Clinton. A straggling campaign is something else. The party shuffled about for months like an old man in a dressing gown and sneakers, looking for that presidential hero he had misplaced. Now the party will get its act together on the presidential front, just like in the old days but more so. It will out-do previous GOP feats of cohesion and become the party that says this above all: Paul Ryan, hero of the Tea Party, must go to the White House and run the country.

Brass tacks. The far right of the GOP has now been ushered into the party's upper regions. The faction couldn't get there through the presidential primaries—their guys lost. On the other hand, the candidates that did win the nomination still didn't get a lot of votes. The base was withholding them, like John Galt withholding his talent for wealth creation. Now the right will be willing to make the investment because uncertainty has been removed. Ryan has been blazoned forth as the man with the plan. His pitch makes as bold a statement as “Mission Accomplished.”

Republicans love a show and know how to put one on. They'll spend the next four years making Ryan's pitch to each other, working themselves up. They will feel great. Even if they lose, they will do so with style. They won't be the party that fumbled and shuffled its way into the end of its years. They'll be the pole vaulter who almost cleared the impossible height. Ryan will be the man who almost turned a nation's direction, and he'll show up in the backstory to the Terminator franchise. Meanwhile, the country will keep doing what it does.

A Biden minute. I like to think Joe Biden has gifts that the public overlooks because of his flapmouth disorder. He understands policy and government functioning at a detailed level. He can even explain them. But he can't govern his mis-wired sense of Hey-this-would-be-a-great-thing-to-say. So his mouth swings open and he produces a burst of verbal party time during which syntax or points of general knowledge or common-sense discretion get sent ass backwards.

Republicans think he's stupid and will make a fool of himself in debate with Paul Ryan. I disagree. I can see him use his blurting as a cover for showing up Ryan's dodges—a sudden “Hey, that's good!” when a fast one is pulled. Like the old hack is so guileless he can't contain his admiration for a fellow pro. Republicans will think those moments are victories. For others, maybe a crucial number, they'll bring to mind that Ryan may be more slippery than such a big-eyed fellow ought to be.