Newt’s Underwear Is Starting to Sweat

Can it stay dry long enough to get Obama reelected? 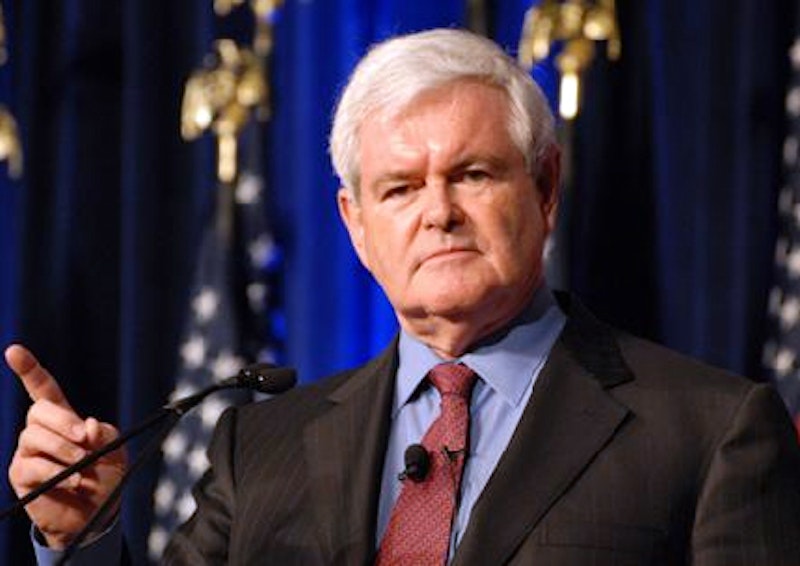 Six weeks ago Newt Gingrich was a television talking head with books to sell. Now he’s number one in the Republican polls and musing on his resemblance to Charles De Gaulle. The man who got snippy with Maria Bartiromo and Scott Pelley has inflamed the Republican base. He is the leader they seek, the world-historic transformational figure who knows how to be snotty when faced with a rival pile of hairspray and TV makeup. Newt knows it, and his ego is beginning to heave and quake. It’s undergoing a transformation—not so much from Bruce Banner to the Hulk, as from the Hulk to the Hulk’s enlarged, black-green, hemorrhoidal anus.

To put it differently, Newt’s underwear is starting to sweat. His glands are flooding him with the mix of lust and fear that soaks him when actual power is at hand. Never is he more alive, never is he more catastrophically useless. Just a happily flapping mouth until recently, he is about to become the Clinton-era Newt, the Newt of the Golden Age, the lightning-eyed leader who strode about making a hash of things until his fellow Republicans dragged him to the Hill cloakroom and stuck in the knives.

“Gingrich is not stable enough emotionally to be the nominee—let alone, the president.” That’s what a “Republican Insider” told the National Journal in a message that reeks of been-there weariness. (The man was so wrung out he couldn’t punctuate.) Another Republican put his finger on the problem now facing liberals. “With Newt, we go to bed every night thinking that tomorrow might be the day he implodes,” the operative said. So it is on our side too. Granted that Newt is too much of a childish sack to lead a country or a ticket, is he also too much of a childish sack to make it through the early primaries?

Let’s stipulate that only a miracle could let this man grab his party’s nomination. The Republicans are still a sizable outfit, and doing well in TV appearances can’t make up for a lack of money and a nonexistent organization. But the Republicans are also a frivolous party. Newt puts on a good show, maybe the best in contemporary politics, and he’s a hater. As of now, polls find that not only does he lead poor, circumspect Mitt Romney in simple preference—nationally and in the first three states where voting will take place—he also outscores Romney in the “positive intensity” of his followers. Those who like Newt get worked up about him, meaning they might be more likely to show up and vote.

The only people willing to make an effort for Romney are the ones who write checks to him or work for the money provided by those checks. Most likely that’s enough for the long run, but he’d be much better off if there were no long run, if he could become the nominee apparent in February instead of June and avoid a long slanging match in which he and Gingrich trade accusations of hypocrisy and buck raking. Romney is already a candidate who fills onlookers with inertia (to paraphrase Peter Cook). With Newt and his mouth looming larger, he stands a good chance of becoming severely damaged goods.

Or maybe not. Here is where liberals feel their livers shrivel. Republicans have seized and dropped a series of mouthy talking dolls, from Donald Trump to Herman Cain. Maybe they’ll lose interest in Newt and, when the time for action comes, start writing in Dog the Bounty Hunter. Maybe this doll will make it impossible for them to hold on to it. Newt overreaches. When the Starr Report had Clinton on the ropes, Newt’s glands had to pump and he released the tape of Clinton’s grand jury testimony. He wanted to humiliate a humiliated man, and the country took note.

Gingrich is a small man on a grand scale, and that’s why the base likes him. He’s made an art form of resentment since he baited Tip O’Neill and sent GOP candidates the lists of words they should use (“sick,” “twisted,” “vicious,” “hateful”). But when the small man is lifted as high as he always wanted to go, he winds up showing why he should never have been lifted up at all. So now we say the Liberal’s Prayer. Please, let Republican voters stay crazy, but render them less fickle. Please, let Newt be Newt, but don’t let him be the full, untrammeled Newt until after (if possible) the California primary on June 5.

Oh dear, if only the stimulus bill had been bigger. Then we wouldn’t have to worry about these things. But it is what it is, as they say nowadays, and the fate of the White House depends on the interaction of two irascible, tantrum-prone, maladjusted children: the Republican electorate and its one-man condensation, Newt Gingrich.