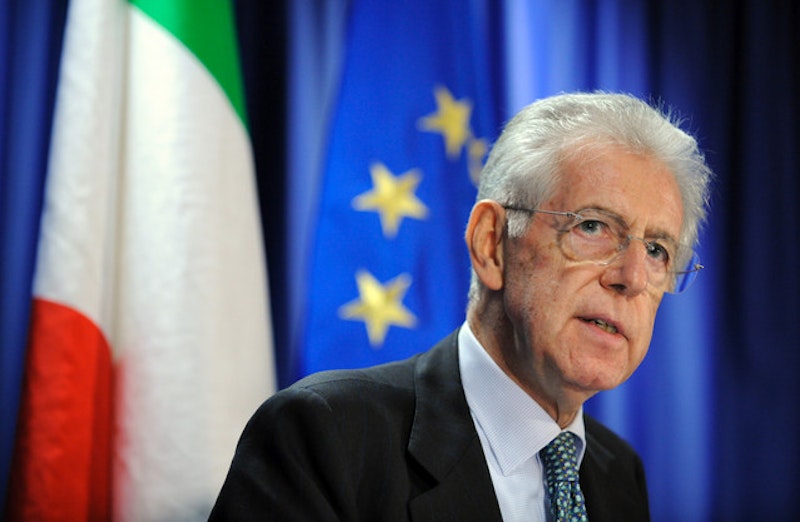 So we’re all aware of recent history, right?

2008: Enter Obama, the man with the ideas and the change. Americans are assured that the problems we’re facing are largely due to stodgy old politicians in the President’s Cabinet who don’t have any idea how to fix things like an economy. Obama brings in—without oversight from Congress—bankers, lawyers, and professors to deal with issues ranging from economic bust to energy consumption. He assures us this is the best thing for us and we eat it up. By 2011 economic solutions are written by men who are only concerned with their own net worth; energy solutions are more cerebral than practical; and the working people are at least rumbling about revolution.

It all sounds like a broken record to those of us who live in the U.S., but apparently Italy didn’t get the memo.

2011: The new interim Prime Minister Mario Monti, set to handle policy until the next election, is coming to power during the Euro crisis and is under the gun to fix Italy’s economy. So what does he do? He brings in bankers, lawyers, and professors to solve the country’s problems, without the customary electoral process, hailing it as a novel solution. The Italian people are reportedly excited about the future under this guy.

Eventually, this model may have a positive effect, assuming that the person in charge actually does have the good of his people at heart. But the definition of insanity is doing the same thing over and over and expecting different results. So no one get their hopes up just yet. “Things need to get worse before they get better,” right? Maybe we’ll see change in the form of a candidate from a minority that builds his or her platform the promise of change... oh wait. We sang that song, made that dance and it got us another four years of Bush. Note to Italy: try to learn from our mistake of putting someone in charge to fix a problem, who was part of the machine when the problem started.

Whether things improve from here for the U.S. or Italy is anyone’s bet. I put odds on things getting worse without ruling out the chance of improvement. I just won’t be holding my breath on the promises of a single politician and I won’t be voting by party the way a shallow twat paints by color. Italians ought to realize that copying the U.S. on governance is definitely not the best idea.