The new Vanity Fair profile is less like journalism, more like authorized biography. Still a nice read, though. 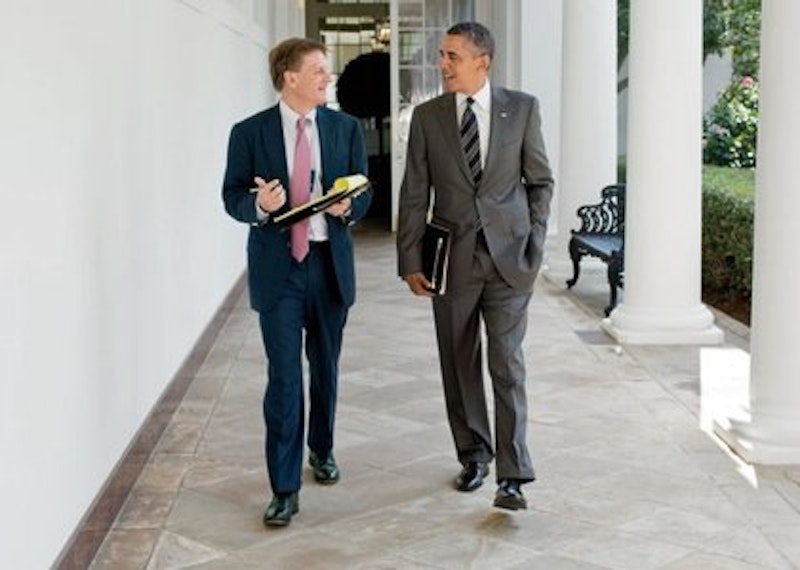 Michael Lewis, maybe the smartest and most charming magazine writer alive, spent six months hanging out with Barack Obama, that intelligent and charming politician. Then Lewis wrote up the results and sent them to Vanity Fair, which published them in its October issue. Lewis said he wrangled the access by telling the White House it could look over and change any quotes he collected from Obama or the people close to Obama. That was his idea, and he offered it from the onset. He also allowed Obama to put remarks off the record after saying them. A simple “Look, you can't use that” was enough. Lewis figured that this way Obama could relax and a real person would emerge.

In the end, he says, the White House changed little, just phrases here and there that the right's outrage machine could have taken out of context: “They were filtering for this weird reality distortion field that's out there.” But that's “they.” What about the president?  Maybe when he said, “You can't use that,” he was filtering for something more than reality distortion. Obama is capable of in-context quotes that a big part of the American public finds hard to accept. The “guns and religion” quote is one. Or imagine if his 2008 speech on race had leaked instead of being a speech.

When the president talks to the American people, he talks to them. But when they're not around, he talks about them, and he doesn't mind analyzing. It's not that he's catty or unsympathetic at these moments. But he's not uncritical either. At any rate, the American public doesn't see itself as something to be understood and explained; it sees itself as the world's norm. Every public feels that way about itself, but this one suffers fewer reminders that it's wrong.

Then along comes the president in Air Force One, musing with a magazine writer. We have only so many decades left on top, the president might say, and the big job is to get the American people looking ahead to that moment, to the downshift, but when you're part of the most privileged population on the planet it's hard to imagine any other arrangement. Look at American whites and their experience with the civil rights movement… “Are you sure you want me to use that?” asks the magazine writer. No, says Obama, that's not for the magazine.

Glenn Greenwald is disgusted. Obama lovers have a conscience, and he's named Glenn Greenwald. We don't listen to him much, and he gives us a headache, but we figure he's necessary. He's a homely, irate, keyboard-hammering civil libertarian who is some kind of opposite card to suave Michael Lewis. Greenwald doesn't make the difficult look easy; he makes the unpleasant seem inescapable. Look at this! he shouts, and jabs something unwelcome in your face: “President Obama’s kill list and assassination powers,” “the Obama administration's fixation on punishing whistle-blowers,” “David Plouffe’s speaking fees.” He comes back a few hours later to jab it again: “UPDATE.” Then, a bit later: “UPDATE II (Fri.).”

This time he was set off by the Michael Lewis piece. The seizure was minor by Greenwald's standards, just a couple of screens, but still intense. Its theme came down to this, an apt quotation he borrowed from George Orwell: “Journalism is printing what someone else does not want printed: everything else is public relations.” Greenwald argued that, since Lewis had agreed to submit quotes, his article is propaganda and not journalism. He made clear he finds this disgusting: “There really is nothing worse for a journalist than to serve eagerly as a P.R. stenographer for a politician.”

Well, it's not good, of course. If you look on Lewis as a provider of supposedly reliable, un-tampered-with information, his saving grace in this affair is that he doesn't write about party politics as a regular thing. If he did, like Sidney Blumenthal or Arthur Schlesinger from days gone by, he'd run a high risk of becoming a permanent shill. Instead he can move on to other subjects, ones on which he may be more independent. Of course, when he writes about finance and the economy, you may still wonder if he's taking an administration point of view. If a president can trust you with six months of face time, maybe he can trust you to have correct opinions when needed.

Greenwald calls the piece propaganda, and Emma Brockes, a very adroit blogger for The Guardian, compares it to fan fiction. Really it's the sort of writing that goes into an authorized biography. Books of that sort can be very good: well written, intelligent and full of largely accurate information. But they're labeled as authorized on the cover and title page, and the readers know what they're getting: a lot of the up close and personal and a good deal of sanitization. As far as I can tell, Vanity Fair does not say anything about the quote-cleaning agreement. Michael Lewis talked freely about it on NPR; I think he doesn't see the deal as a concession, just as a tool needed for his particular way of working. But there's nothing to warn readers, as opposed to NPR listeners, of what they're getting when the open the piece. To that extent, it's a scam.

16 stitches for the President. In other ways, the article is an intelligent and charming, up-close-and-personal look at an introvert in power who somehow reaches out to people and leads them without schmoozing. The leadoff message is that Obama is tough and down to earth—the article opens with the news that he wears a mouth guard for basketball, and that an elbow during a game once gave him 16 stitches. The follow-through message is that his toughness includes self-awareness, a determination to keep power and office from distorting his outlook. The accompanying glimpses of the man show somebody thoughtful, quiet, somebody who connects with people but does it by sidestepping the usual social conventions, the who's-up-and-who's-down everyone senses when they walk in a room. In a meeting of principals, he'll ask the opinion of aides sitting against the wall; in a crowd, he'll look for “not the beautiful people but the old people.”

True? Well, Lewis never says the White House vetted the article's text or had power over color material. Maybe nothing too awful got left out and this Obama is pretty much like the real one. I hope so. As so often, Lewis does a good job of sussing out and presenting the fine points that make admiration a pleasure. Being nice to kids is old hat; seeking out the old people is fresher.

The article's hook is the decision to intervene against Qaddafi. The article says Obama made the decision on his own. He wound toward it in his introverted way and arrived there for reasons of principle that floated above his advisers' range of vision. No votes in saving Libyan lives, but he made the call. Intercut through the article are sections about Tyler Stark, a U.S. Air Force officer who was shot down over Libya during the intervention. He was welcomed by anti-Qaddafi townspeople and treated to the “greeted as liberators” moment that Dick Cheney said we were going to get. That's the way a principled, pondered-over application of force should end. Of course, now we're seeing what comes next, and wondering what comes after that.