Did Obama Throw the Debate? 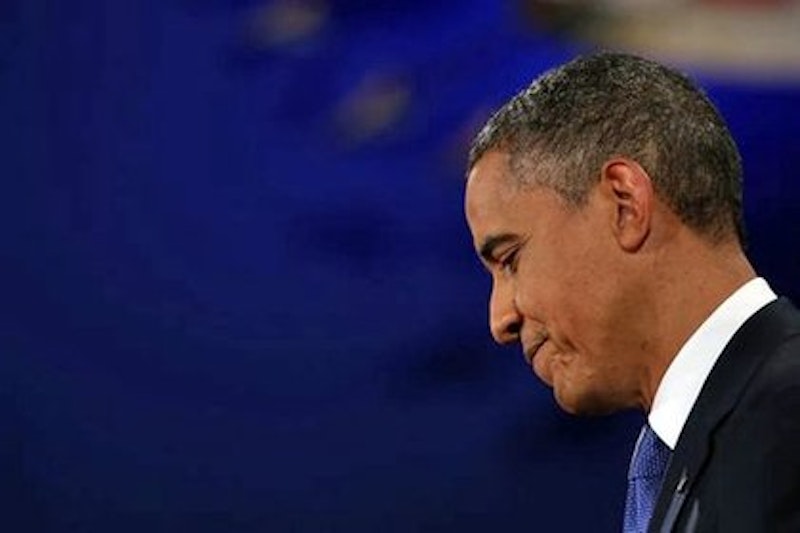 It’s broadly acknowledged that President Obama got beat like a drum by Mitt Romney in the first presidential debate in Denver. Even Slate, that bastion of phony contrarianism, couldn't find a single pundit foolish enough to argue Obama had won it on points or on style. Every poll of debate watchers found at least a clear plurality thought Romney had won. When you take out all the undecideds and people who would ever say anything nice about a Republican, the verdict was unanimous.

Obama didn't manage to win it on word count either, though he steamrolled over moderator Jim Lehrer to speak four minutes longer than Romney. There were too many pauses and hesitations and uhs and ums and ahs. The President looked distracted and bored and pissed off, and that's precisely how he debated. He tried a few canned attacks and when Romney deflected those effectively, he shrugged and passed the time.

The interesting question is why our normally very competitive president charged into the debate with all the enthusiasm of a boxer who'd taken a big bag of cash to take a dive. A lot of people have theories to explain this. Al Gore actually blamed it on altitude in the Mile High City. Many conservative commentators fingered Obama's arrogance. He figured Romney was a lightweight and thus didn't prepare for a real fight.

I have another theory, one that requires a brief biographical diversion but I think the payoff will be worth it. So bear with me. In my freshman year of high school, I stupidly signed up for an Earth science class. It was absurdly easy but by the time I worked this out, the deadline to switch classes had passed. That left me stuck with a dumb class with a ton of homework and regular tests that I would ace.

The syllabus showed us how the work was weighted and I could do math. If you could ace the tests, you could get away with not turning in a lot of the homework. It's not that I didn't do most of the homework. I did, but the turn-in box was right next to the recycle bin. When it came time to turn the assignments in, I would get close and float the paper and see where it landed. Apparently, I was a lousy shot because 40 assignments didn't make it in. Final grade in the class: A.

I was throwing assignments in the recycle bin for the same reason I suspect Obama threw the first debate: to create a hole that I had to climb out of and thereby keep it interesting. Obama, most of his biographers agree, has a great capacity for boredom in government but really enjoys campaigning. Given the Republicans' free-fall in the polls lately, if Obama had put Romney away in the first debate, that would have effectively ended the campaign.

Instead, Obama has turned this into a real fight. Romney will get more money and a bump in the polls and Paul Ryan will rip the hair plugs right out of Joe Biden next week in their match-up. And then Obama and Romney will face off again in front of a townhall audience. Literally every watcher will wonder if Obama will bring his A-game. This approach may be reckless or arrogant or any number of other things that give political consultants heart palpitations. It's also one hell of a way to stave off boredom.