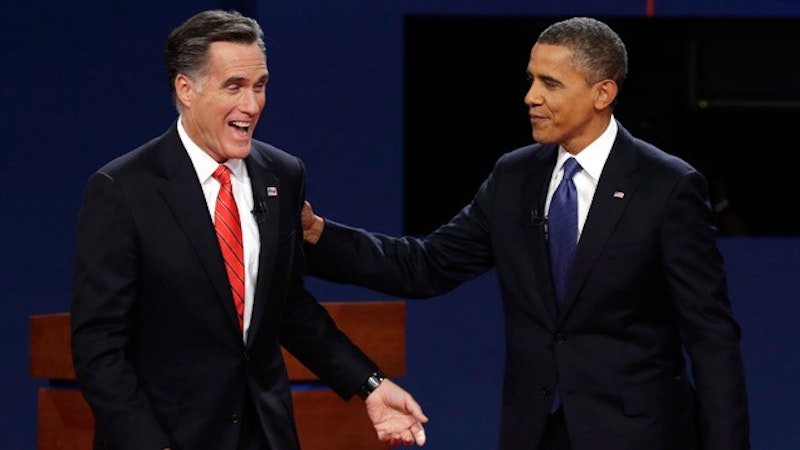 8:00 Tonight's debate: sponsored by the commission on presidential debates, moderated by the Crypt Keeper.

8:02 Oh my God THAT GIANT EAGLE IS GONNA SWOOP DOWN AND EAT THEM BOTH.

8:05 Obama might not be the greatest president in history, but husband of the year? Probably.

8:08 "Trickle-down government": catchy. But does it qualify as a zinger?

8:12 Obama does "amused but bored" so well, probably because he's sharpening his mental hatchet.

8:14 There appears to be a drastic disparity in size between the two American flag lapel pins on stage tonight.

8:18 Studies? Bah. What do researchers know about anything?

8:21 I'd forgotten just how tedious debates are when they're actually going on, regardless of the level of substance or the theme. The real fun comes the next day as pundits and regular folks twist ourselves into pretzels figuring out who fucking won.

8:23 The President asks Independents to whip out their calculators in order to figure out who to vote for.

8:25 Romney's desperate insistence on getting the absolute last word every single time will help doom him; it makes him sound unhinged and loony, and Obama knows that the best defense is to tune out and take notes; it helps underline how clear the choice in this election is.

8:29 Romney to Lehrer: PBS is toast. He was trying to be jocular about cutting subsidies, but as history has shown, you can't believe anything that comes out of one side of his mouth or the others.

8:31 Obama on takin' out the trash, makin' cuts, throwing out "unbalanced."

8:35 I've never had to spend this much time continuously staring at and listening to Mitt Romney before, and I'm pretty sure that I'd rather perform an appendectomy on myself with a rusty spoon than sit through one of these debacles again.

8:37 Oh, no: more anecdotal stories about average Americans who are hurting out there. Time to get some coffee.

8:40 Something tells me that hours after Obama, Lehrer, the, media, and everyone else has gone home, Romney will still be up on that stage, babbling and raging incoherently at an empty lectern.

8:46 I have to admit, the Governor's hair is kind of walking away with this thing.

8:48 Seriously, is anyone who isn't an independent voter swayed by anything either candidate is coming out with at this point?

8:52 It's never occurred to me until just now that I could open a bank—in my garage! Romney, champion of small bankers everywhere. Obama dissects the financial crisis in his response, wisely resists temptation to make a "parking millions in a Cayman Island account" crack about his opponent.

8:54 Obama's "can you believe this guy?" smirk is the only thing that's keeping me tuned in anymore. As for Romney, there's well, such a thing as being too animated, too excited, too eager.

8:57 Romney: "Expensive things hurt families." I can't tell if that was supposed to be a zinger, a pull quote, or a preview of next week's stump speech, but you know what? Shrunken government hurts families. Busted streets that we can't afford hurt families, as do tiny police departments.

9:02 Romney: I'm enthusiastically and incredulously pleading ignorance as to the toxic nature of the U.S. Congress when you passed Obamacare, and I'm cynically assuming that independents won't fact check my snake oil.

9:03 BOW. All that's missing is the blood trickling from Mitt's nose.

9:07 How traumatic is it gonna be when 60 million plus of us watch Romney's head explode on live television?

9:08 At least 30 percent of the reason that Obama will win the election a month from now is because he has an awareness of how he comes across on television.

9:10 Oh, damn! Who was supposed to get in all the zings in in this debate again?

9:15 The transcript of this debate will favor Obama more than Romney. On camera, Obama seems wiped out; he's stuttering and stammering a bit even as he's scoring great rhetorical points. By contrast, Romney looks like he's flying high on coke.

9:17 Romney ladling out the hard-right red meat, losing himself, giving God dap, wandering into the minefield of statistics.

9:20 Obama, in essence, on the Romney/Ryan ticket: "The clothes have no emperor, but you already knew that."

9:27 Obama, schooling Romney on what governing the country is REALLY like, then bringing the quiet thunder.

9:30 I mean, I know who I think won this debate, but the truth is that almost no one is gonna agree with me because I'm predisposed to agree with the President. Expectations for Romney were low enough that all he had to do is come out on the other side breathing, and he did that, and what's scary is that that might be enough to reassure the right that their man's a realistic, non-suicidal bet.