Libertarianism doesn’t settle the abortion question but better frames it. 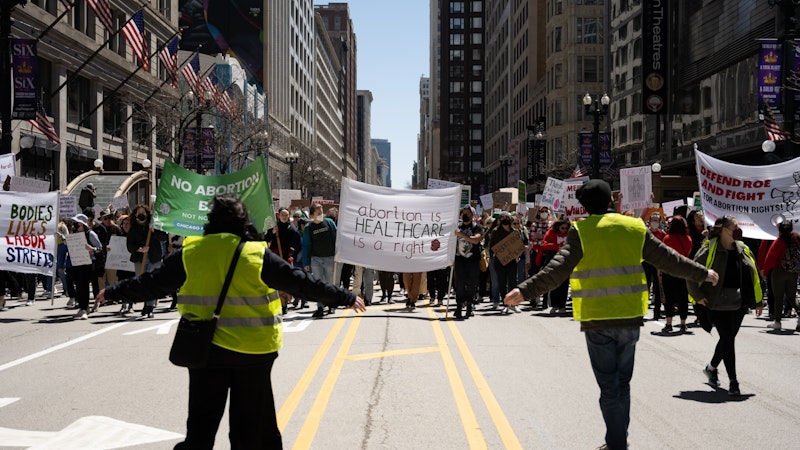 People love to dodge underlying questions by focusing on superficial ones. In the case of abortion, people on both sides can argue for days without ever explaining the criteria by which they decide if a fetus is a person, potentially possessing rights, which should be the first step in the debate. (Otherwise, it really would be as meaningless an issue as tumor-removal.)

Pro-choice libertarians can usually reassure their own social circles if the abortion issue comes up, simply by asserting that government has no place intruding into the womb. They reveal how little thought they’ve given the issue if they think that settles the question even among libertarians, though. It shouldn’t. (In point of fact, it doesn’t, since libertarians remain divided on the topic, almost like normal people.)

If—I merely say if—fetuses count as individuals, then they may, even on the most extreme anti-government libertarian theory, be due at least some measure of the moral respect afforded the people inside whom the fetuses have the misfortune to be trapped through no fault of their own.

It may—I merely say may—then be the case that certain rights against assault or destruction can be ascribed to the fetus.

Furthermore, if—I merely say if—one concludes that those (negative) rights of the fetus can rightly be enshrined in law just like any other individuals’ rights, people could just as easily enforce those rights via anarcho-capitalist private protection agencies as through government, so it’s disingenuous in the extreme to pretend that this hypothetical law constitutes intrusive government in a way that the enforcement of other laws against assault don’t.

Law, anarchic or governmental, goes where the crime is, and if that means policing a womb—not just against abortion but, say, against concealed tiny nuclear weapons (someday)—that, given probable cause, is where law rightly goes (at least in the abstract even if, perhaps, it balks at enforcement for practical reasons).

It would be absurdly broad to say that law just can’t delve into anything that goes on “down there.” Imagine the justifiable outcry if someone asserted that there can’t be a law against rape because it might necessitate police-affiliated medical personnel examining vaginas.

If something resembling the Roe v. Wade decision is worth retaining in law, it would behoove both sides in the debate—as well as the overwhelming majority of Americans like me who find ourselves somewhere uncomfortably in the middle, wanting neither legal restrictions at the instant of microscopic conception nor unfettered baby-rending minutes before a healthy nine-month delivery—to think of the issue in terms of how many individuals are present and what constitutes one of them assaulting or being assaulted by the other (and corollary questions such as whether someone engaged in parasitism can be treated just as roughly as an assailant if the parasitism isn’t occurring by the parasite’s choice—what’s more, if the innocent-parasitism is perhaps even occurring because of negligence on the host’s part).

It’d be more productive to debate, say, whether parents owe life-sustaining resources to living beings they have willingly, even if negligently, created than to engage in vague and largely unresolvable culture wars over how much power the patriarchy has or how intimate a vagina is compared to, say, a hand used in a robbery. Whether that fetus gets destroyed shouldn’t hinge at all on how rude men are these days in expressing their preferences in female swimwear, etc., just as whether Canadians have a right to mug me shouldn’t hinge on the events of the War of 1812. Law should be about what individuals can or can’t do to each other.

But for all the likely alien-sounding philosophy-class considerations I’m inclined to bring to the issue, I end up holding what I think most people would consider a fairly moderate position on abortion (though I don’t pretend to have resolved it with enough satisfaction to hunker down and become a fanatic about it): roughly, that the fetus has an increasing moral claim throughout gestation, starting at zero and gradually reaching individual-protected-by-law, no matter how messily that complicates things. I don’t pretend there’s either a clear moral or legal dividing line, certainly not a sudden-and-obvious one.

So perhaps—I say perhaps—some moderate legal rule should exist along the lines of permitting abortion in the first trimester, limiting it in the second, and forbidding it in the third (with endless common-sense non-temporal caveats about not needlessly imperiling the mother if that can be avoided, maybe someday in the future even through the deployment of an artificial womb, etc.).

Furthermore, the Roe decision crudely approximates this three-part rule, so if it stays in place, I won’t complain, and if it gets overturned, I hope we’ll see state-by-state legal variations on the topic that’ll teach us both moral and empirical lessons, rather than just assuming that the law throughout the entire nation should veer back and forth each time there are House elections. I even think a pro-life-leaning libertarian could make a reasonable case for a rape-and-incest exception, since the moral culpability for that abortion rests at least in part on the rapist—though even the “Hey, don’t take it out on the fetus!” no-abortions-at-all position of a Rick Santorum could be defended in terms of innocent individuals’ rights against assault.

If all that uncertainty sounds like (net) apathy on my part, at least admit I’ve put more careful and cautious thought into the matter than many of the God-fearing or patriarchy-fearing blowhards on the fringes from which most of the noises on the topic usually emerge.

But last I knew, stats suggest that all the pro-life and pro-choice radicals put together only add up to about 17 percent of the population, with the other 83 percent probably just wishing they could be left out of the argument. That likely explains why the activists on each side never turn out crowds quite as large as they’d hoped.

Law struggles to handle nuance even when not burdened with contentious cultural or theological issues, and I can understand another subset of my fellow libertarians saying: since this is all so complicated, that in itself is another reason to default to keeping law out of it altogether. Maybe—just don’t pretend that’s as clear and simple as the typical pro-choice libertarian would like it to be.

Much coercion and moral negligence is caused by pretending everyone knows what the “neutral” or “default” position is on a question: bomb until the terrorists are gone, unplug the computer if it starts to become sapient, don’t treat the orangutan’s gesticulations as a legally-enforceable territorial claim, first decide how many newcomers the nation can sustain, etc., etc. Admit the dangers of glossing over ambiguities like these, each partly rooted in empirical rather than purely moral murkiness. I can cheer the intuitive appeal of the rule “When in doubt, don’t govern” without thinking it’s quite as obvious I should embrace the morally riskier rule “When in doubt, withdraw the legal protection of life and limb—and rights-bearing status—from entities about whom we may not fully care.”

At least concede, before you accuse some libertarian-leaning person of being a sexist hypocrite for opposing abortion, that he might be motivated by a very consistent, across-the-board opposition to assault. No means no, so to speak, even if the victim is too tiny and partially-formed to say so just yet. We want to stop all assaults if we easily can. Whether Roe inspires assaults or stops them remains a tricky question on any useful moral theory, and screaming “Sexist!” or “Baby-murderer!” won’t change that, even if for some troubled people it feels good in the short term.

To clarify their thinking about it all, both pro-choicers and pro-lifers should be libertarians, though, along with everyone in between.

Ayn Rand, in typically hard-ass fashion, took a pretty ruthless pro-choice line on the topic (and so, for one magical week or so, the left will probably be in love with her now), seeing the fetus as a straight-up parasite without rights. But Rand didn’t really do nuance. But if you nonetheless want to hear what she thought about a variety of topics—and buildings—you should join the Ayn Rand-themed walking tour I’m taking, hosted by my friend Fred Cookinham, 11 a.m. sharp on Monday, May 23 at the corner of 42nd and (tiny) Vanderbilt Ave. in Manhattan. (That will have to make up for me making so few other public appearances and otherwise vanishing the past couple years.) The odds of getting pregnant along the route are slim.