Euthanasia's a Possibility For Those Too Poor to Live In Canada

Next year, Ottawa will allow assisted suicide for the mentally ill. 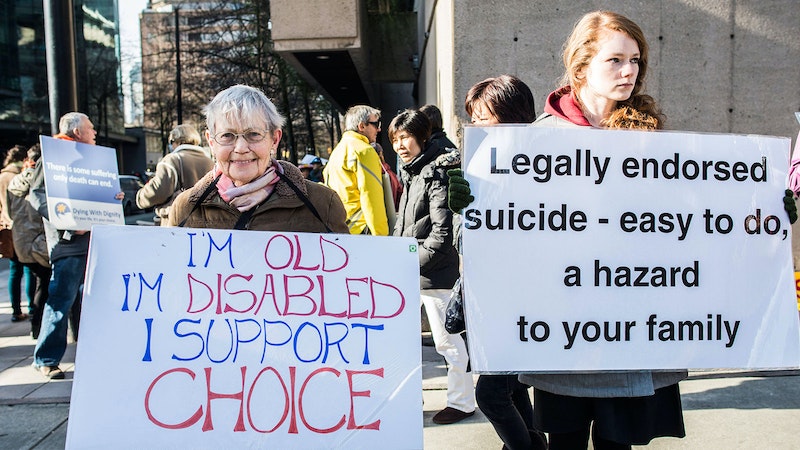 A 31-year-old Toronto woman going by the pseudonym "Denise" is confined to a wheelchair and awaiting final approval for a medically-assisted suicide request after she was unable to find an affordable apartment that won't exacerbate her chronic illnesses. With a medical condition that makes her susceptible to anaphylactic shock if exposed to cigarette smoke, laundry chemicals, and air fresheners, finding safe living quarters on her limited budget has been so difficult that she prefers death to persevering. According to Denise, the reason she wants help in ending her life is her "abject poverty."

I hesitate to say this woman is "lucky" that the Canadian government will allow a physician to end her short life, when the alternative is for the government to find her a humble place to live at, at the very least, a subsistence level. How hard can that be for the nation whose citizens are always touting their government's concern for the common good by comparing it to their Southern neighbor's laissez-faire, uncaring individualism?

Denise said she and her supporters have called 10 different agencies in Toronto to locate suitable housing, but none of them were able to even find temporary housing or emergency funds for her. On the other hand, she found that applying to be euthanized was a much easier process. The price of life in Canada can now be calculated with some simple math. Just add up this woman's modest monthly financial requirements and subtract the $1200 in government assistance she's now receiving, and you have the number.

Denise’s plan was made possible under Canada's MAID (medical assistance in dying) law, passed in 2016. Previously, that legislation covered those whose death was already inevitable, but the law was expanded last year to include those in other categories than the soon-to-be dead. Denise doesn't really want to die, but she sees no financial path to avoid life on the streets in a wheelchair.

Denise is in a different category than another person CTV reported on—Cheryl Romaire, suffers from chronic inflammation in her spinal cord, and now feels "constant burning, electrical, icy pain" in her back. Romaire's also eligible for euthanasia, but that's because her  suffering's unbearable. A few extra bucks a month isn't going to alleviate that. The ethics of promoting assisted suicide are thorny, but the morality of healthy people insisting that those in Romaire's situation must bear their pain for a lifetime must be scrutinized as well.

Canada's Maclean's has reported on a woman who said, "An increase [in income support] is the only thing that could save my life. I have no other reason to want to apply for assisted suicide, other than I simply cannot afford to keep on living." Canada's getting into tricky moral territory when it facilitates the deaths of people who only want to die because they can't afford to stay alive. An official Canadian government document published in 2020 estimated the cost savings resulting from the original 2016 MAID law and the amendment to that legislation—Bill C-7. Given the cold-blooded nature of this analysis, it's not too dystopian to imagine that the government might succumb to its baser instincts and find a way to justify ridding itself of a costly group that's no longer able to contribute to society. As MAID applicants become younger, which is inevitable, the potential government savings over their longer lifetimes will provide an added economic incentive to help them check out. The government would find a way to explain that such a culling of the herd was based on the most humanitarian of motivations.

In March of next year, Canada will become one of the few nations in the world to permit euthanasia for those whose sole underlying condition is mental illness. Doctors will soon be able to kill patients suffering from depression, which is depressing.

What's going to happen is that those who can’t afford needed therapy, medications, or crucial medical care will seek the MAID option. In the event of another pandemic, the scenario of the government participating in opt-in euthanasia is frightening. My calculation of the dollar figure Canada places on a human life is approximately $1000 per month. Denise currently receives $1200 in government assistance, and I believe that she could live on $2200. Life's becoming cheap in Canada.

Denise ought to make her name public. Through charitable organizations and crowd-funding, she could certainly make up the difference. That might embarrass the Canadian government enough so that it will rethink its facilitation of suicides of people too poor to live.