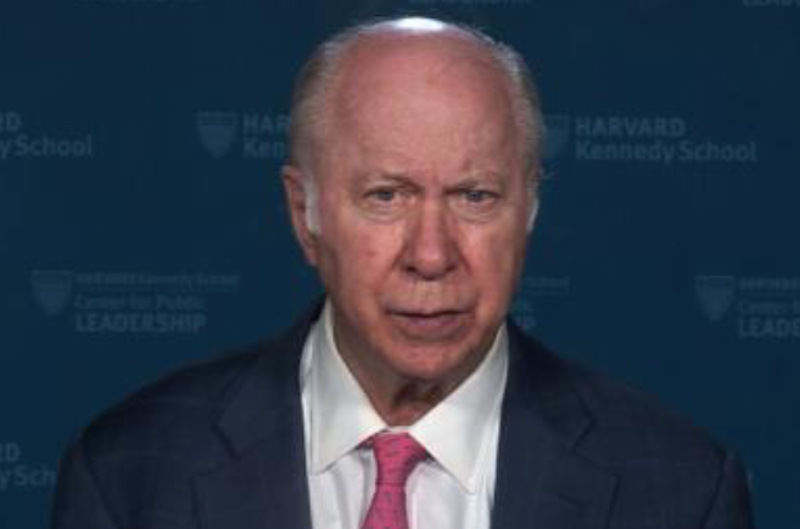 Apparently, many people think 1884 was an instruction manual, including bland centrist pundit David Gergen. That was the year when future Supreme Court Justice Oliver Wendell Holmes Jr. (the overrated advocate of eugenics and regulation) gave a Memorial Day speech lauding the “hearts touched by fire” of people who, like Holmes himself, had headed off when they were young men to fight for the Union in the Civil War. With slight variations, the phrase has since been deployed as the title of at least three books, one out this week from Gergen, just as he turns 80.

They’re books of the sort that laud predictable, centrist, “moderate“ things such as leadership and war—including a 2004 book full of inspirational quotes chosen by decidedly non-radical Elizabeth Dole, widow of Sen. Bob Dole. Familiar wars, familiar politicians, and centrist, largely uncontested policies—ranging from having a Federal Reserve to letting the government own land—are the reasons humans die or become impoverished in large numbers in our era. Boredom can kill, especially by making us lower our guard, and David Gergen is living proof.

Ironically, Gergen being boring and centrist most of the time twice nudged me closer to the fringes of politics, both times because Gergen uncharacteristically flipped his lid over conspiracy theorists hitting a little too close to home—making even a mellow, establishment-leaning, bourgeois guy like me start to have doubts.

First, there was the time Gergen was on a mainstream news discussion show to talk about the odd death of Clinton deputy White House counsel Vince Foster. After several minutes of acting unfazed, Gergen ended the interview by saying there was one more little thing he wanted to add, after which he whipped out a piece of paper that turned out to be a long, lawyerly, prepared statement asserting that while he didn’t think any crimes had been committed in the Clinton White House regarding Foster’s death, if there were any crimes, he, Gergen, was fully unaware of them. Stiff, weird, suspicious.

Second, there was the time Gergen was asked by conspiracy theorist Alex Jones about what it was like to attend a Bohemian Grove meeting. Gergen could so easily have laughed it off and said it’s like a frat party, except with richer and more influential people, or something like that. Instead, Gergen became as deadly-serious-sounding as if, well, Jones asking questions was about to get them both killed. Gergen spat that he had no respect—none!—for anyone who’d sneak into a Grove meeting as Jones had, knowing full well the goings-on there were supposed to be completely secret. Again: stiff, weird, suspicious.

So, if Gergen is supposed to be what passes for the safe, palatable mainstream in our political culture, maybe it’s high time to worry—not just about him but about all the pieties that keep boring, unphilosophical establishment androids like him in business (and the rest of us taxed, regulated, drafted, and propagandized). If he’s convinced virtue flows from moderate Washingtonians and august military veterans, maybe it doesn’t. If he’s so easily rattled, maybe he—and countless bland functionaries like him, from the White House to the TV news set—have a hell of a lot to hide.

His main piece of advice for reforming politics is self-effacing, in its way, but also annoyingly and typically bland: He thinks Boomers should retire from elective politics because their ways aren’t quite working and it’s time for fresh approaches. Probably true, but that’s nonetheless yet another thoroughly status quo-preserving, philosophy-free bit of pseudo-advice, about as empty in practice as telling students to “be great like John Adams” or something. Gergen must know that absent some sort of practical policy suggestion—such as “Abolish all government so that individuals are finally free”—shallow generational analysis is likely just to perpetuate the current mess with slightly less wrinkled faces.

When he’s not advising people to get rid of the old guard, of course, Gergen’s still the sort of person who does a fawning onstage in-person interview of another figure hankering for a vaguely establishment-reaffirming non-revolution: the World Economic Forum’s Klaus Schwab, would-be architect of the “Great Reset” ushering in a post-Covid, post-capitalist world.

I’ll say this, though, for people Gergen and Schwab’s age (the latter turning 84 just over a month ago) and for the elderly in general, not just Boomers: Contrary to calls from Gergen, hippies, woke activists on campus these days, and many others, I suspect older leadership tends to be saner leadership. I say this not because I’m particularly right-leaning or think the elderly will just happen to have been born at a time more compatible with my values. Nor do I think, as Gergen now seems to, that people become more stagnant and in some sense right-wing in their thinking as they age because their energy levels are declining or something like that.

Rather, I think people get more conservative with age because they learn, thank goodness. The trick now, though, is teaching people, old or young, not to accept centrism and the current establishment as cheap, bureaucratic substitutes for conserving the real core principles that make a civilization sustainable, such as morality, property rights, individualism, and free speech.