A consideration of Naomi Klein’s No Is Not Enough. 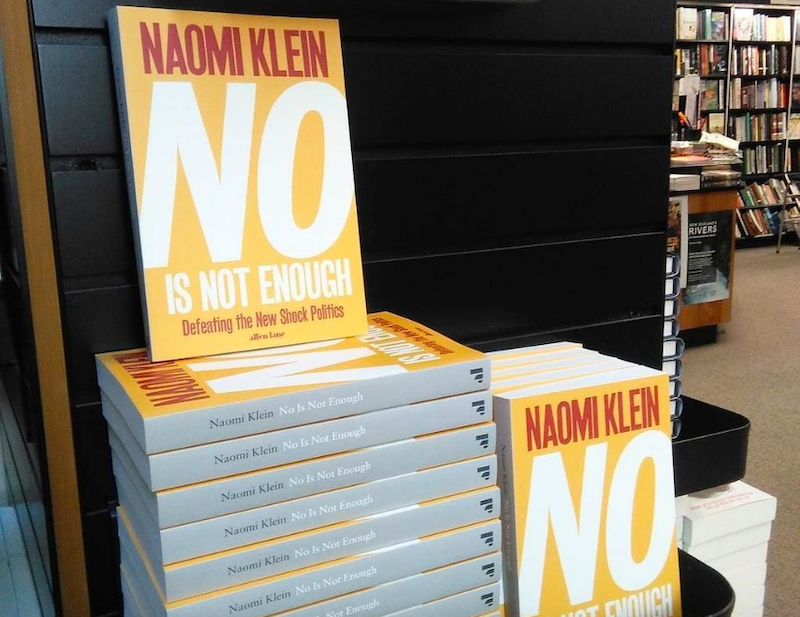 Publishing in the Trump era is dangerous. How can a book about politics and current events possibly stay relevant even three weeks after it’s been turned in to its publisher? Naomi Klein’s No Is Not Enough: Resisting Trump’s Shock Politics and Winning the World We Need was rush-released in June and I’m still crawling my way through it. I might as well look for a copy of the New York Daily News or The Baltimore Sun from April. Klein is in a special position, one of the few authors who could get a book that references James Comey’s May 7th firing on bookstore shelves and sitting on porches in Prime boxes by June 5th.

Klein has nothing insightful or original to say—No Is Not Enough is merely reassurance for #TheResistance, old news pulped and repackaged as product. I look forward to reading books by authors as good as Klein, but not now—you need five or 10 years of distance to make any kind of substantive and interesting analysis. No Is Not Enough is full of references to Steve Bannon’s brief period on the ropes in April. Now, two months after I started it and got bored, it’s not as dated anymore. Maybe the book will become known as an early reference point for the Trump administration as it happened, but for now its glossy paperbacks are lining Klein’s pockets and contributing to her brand.

Klein talked about Trump and branding in a promo interview with The New York Times: “In the late ’80s, you saw brands start to sell the idea, the sense of belonging, first. That primacy of the brand does a lot to explain Trump, and how he has developed this intimate relationship with his base, why they expect so little of him and why he gets away with what he gets away with, because the rules of branding are really simple: Be true to your brand.”

White supremacy and a young alt-right base were crucial components of Trump’s brand going into the election, and if you didn’t pick up on that when Trump claimed to have never heard of David Duke, then you’re not paying attention. A vote for Trump was for implicit support of white supremacists and neo-Nazis, who all embraced the vagueness of “many sides.” Even though Klein was referencing events in the news cycle that happened what feel like light-years ago, this remains true: “Right now, what we are seeing is Trump shocking the public every day with his outrageousness or his blunders; it’s kind of like a rolling shock doctrine. We’re all clicking on the Trump show, and meanwhile they’re methodically transferring wealth from the lower and middle to the upper, upper echelons of the income ladder. And that is less sexy than Melania slapping his hand away, which isn’t in the book.”

Every week is another scrap of the story, another episode, another cliffhanger. Wasn’t it wonderful how seamlessly we transitioned from North Korean nuclear anxiety to neo-Nazis marching with tiki torches and driving into anti-fascists protestors? Baked Alaska got maced, Jason Kessler can’t sleep, and white nationalists are fired from their jobs. This is not Skokie, Illinois in 1978. How to handle “peaceful” neo-Nazi demonstrations from now on seems simple: outnumber them. The people of Boston did an excellent job over the weekend humiliating and containing their own minuscule white supremacist march.

But as Alex Pareene points out, these are the people that are going to be running as Republican Senate and Congressional seats because the GOP can’t reach anyone else below the age of 30. When TIME interviewed Nicholas Fuentes, a college Republican who marched alongside neo-Nazis, white supremacists, and alt-right tiki torch wielders, the rising sophomore said that he was transferring out of Boston University because of the death threats (15) he received online after being spotted in Charlottesville. Fuentes’ comments are beyond parody: “It’s disturbing to me the level of hate that people have been able to express and been able to feel against someone they’ve never met, never saw, never had a conversation with. They say we’re the hateful ones, we’re the bigots, and I get messages all day from people I’ve never met telling me what a terrible person I am.”

Watch that brief video, because Fuentes’ speaking voice is bizarre: he’s not old enough to buy beer but sounds like a 50-year-old Buckley-worshipper preparing for his first appearance on Firing Line. Fuentes posted this message on Facebook after the rally: “The rootless transnational elite knows that a tidal wave of white identity is coming.”

Letting No Is Not Enough sit for a while and coming back to it has changed my opinion of the book and its future usefulness. What came off as a cash-in in June already feels like an ancient document in August, changed by the way Trump administration’s warps our perception of time from day-to-day. There’s just too much. I’m sure there are many more craven and empty cash-in books now that are just jumping on #TheResistance as a marketing tactic, but the above quote from Klein in The Times hasn’t dated and is borne out every day. Charlottesville has finally shown most white people that racism is dangerous and bad in America, just as Trump's election has kicked the mainstream in the butt enough to protest in powerful numbers. But it’s still just August—anything could be rendered irrelevant at any moment, on the whims of just a few men in this world.