Donald Trump Is Not Your Daddy

He’s not going to pay your bills. He’s incapable of resolving a broken romance. He won’t wash your car. 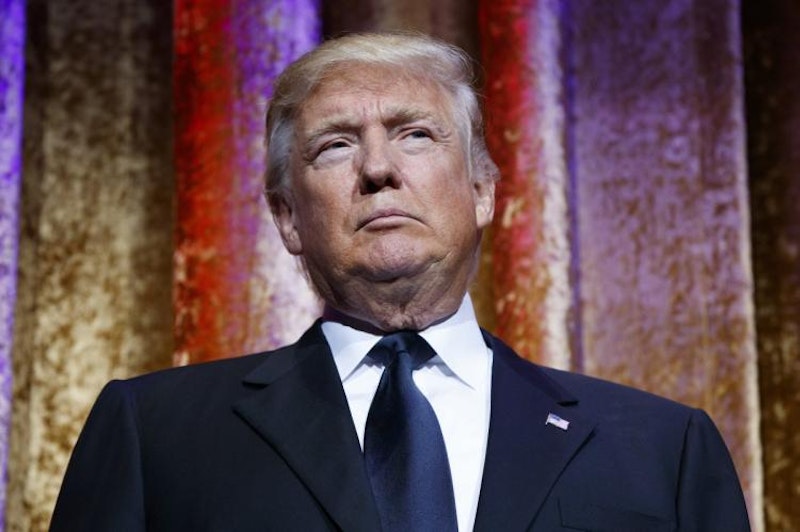 The reaction to Trump in the media and on the left has been dispiriting, not because Trump hasn’t done anything stupid or childish, but because Americans are not supposed to forfeit their ethic of community bonds and self-help in favor of hysterical codependence on a politician. Jake Tapper, Bill Kristol, Sally Kohn, Michael Moore—the way these cultural commentators pounce on everything that comes out of the President’s mouth or Twitter feed reveals a dangerous belief that Trump, or any politician, is there to fix our problems, spiritually guide us, and psychologically comfort us. Trump’s verbal boners are an affront not to American policy or common sense, but to me, personally, deep down inside.

Of course, there’s a great American tradition of protesting the government to address grievances. From the labor strikes in the 1930s to the civil rights era and the activists in the 1980s fighting for AIDS medication, storming the gates of Washington to address a concrete social or political problem is part of who we are. And in times of national crisis or celebration the president can be a suitable mouthpiece for the people.

But at some point in the last 50 years the presidency took on a kind of omnipresent power far beyond what the Founding Fathers intended. We demand that the president address everything from the Middle East to a personal bout of depression. The president has become a therapist, chimera for our irrational fears, boyfriend, priest and teacher. When CNN’s Jake Tapper spends a gorgeous late summer afternoon on Twitter correcting Trump’s grammar, it’s clear that somebody has issues, and it’s not the President. Do I have to bring up Amy Schumer, Stephen Colbert or Cher?

Personally, I think the corner was turned with Richard Nixon. Before the 1960s, social action was intended to offer solutions to concrete social problems. Yet the Baby Boomer reaction to Vietnam and Nixon was vituperative on a scale so intense it indicated that something psychological was mixed in with the politics. As the poet Robert Bly said when seeing protesters at Columbia, “They’re all out there looking for their fathers.” Historian James Hitchcock added his own twist, writing that protests had become “organized forms of therapy.” Soother-in-Chief Obama was perfect at the new paradigm of the president as generous, all-understanding liberal father responsible for everything from our phones to physic health.

In his 1979 book The Culture of Narcissism, Christopher Lasch argued that the human personality had changed over the course of the later-20th century. We transformed from a strong and generally well-adjusted people to those showing a “minimal” self who is personally weak and dependent on government, corporations, authority figures and bureaucracies. Whereas once family ties, local community and jobs that kept fathers at home allowed for psychologically healthy children, this changed after the industrial and sexual revolutions and the rise of mass culture.

Crucially, Lasch added Freudian theory to the mix. He argued that in infants healthy development, or individuation, involves the gradual reduction in scale of fantasies of omnipotence and helplessness. Parents, community, “transitional objects,” productive failures and limits allow a healthy transition into adulthood. Lasch expert George Scialabba once summarized it:

Formerly, the presence of potent but fallible individuals, economically self-sufficient, with final legal and moral authority over their children's upbringing, provided one kind of template for the growing child's psychic development. As fathers (and increasingly mothers) become employees, with the family's economic survival dependent on remote, abstract corporate authorities, and as care-taking parents were increasingly supervised or replaced by educational, medical, and social-welfare bureaucracies, the template changed. The child now has no human-size authority figures in the immediate environment against which to measure itself and so reduce its fantasies to human scale. As a result, it continues to alternate between fantasies of omnipotence and helplessness. This makes acceptance of limits, finitude, and death more difficult, which in turn makes commitment and perseverance of any kind—civic, artistic, sexual, parental—more difficult.

The result is narcissism, which Lasch described: “Having surrendered most of his technical skills to the corporation, [the contemporary American] can no longer provide for his material needs. As the family loses not only its productive functions but many of its reproductive functions as well, men and women no longer manage even to raise their children without the help of certified experts. The atrophy of older traditions of self-help has eroded everyday competence, in one area after another, and has made the individual dependent on the state, the corporation, and other bureaucracies.”

Viewed through the lens of narcissism, the widespread pathologic rage at Trump for being a bad father, and the obsessive and psychotic monitoring of everything he does, begins to make sense. What Robert Bly observed in the Vietnam era is still true today: They’re all out there looking for their fathers.