Rebel founder Ezra Levant accuses an employee of blackmailing him. 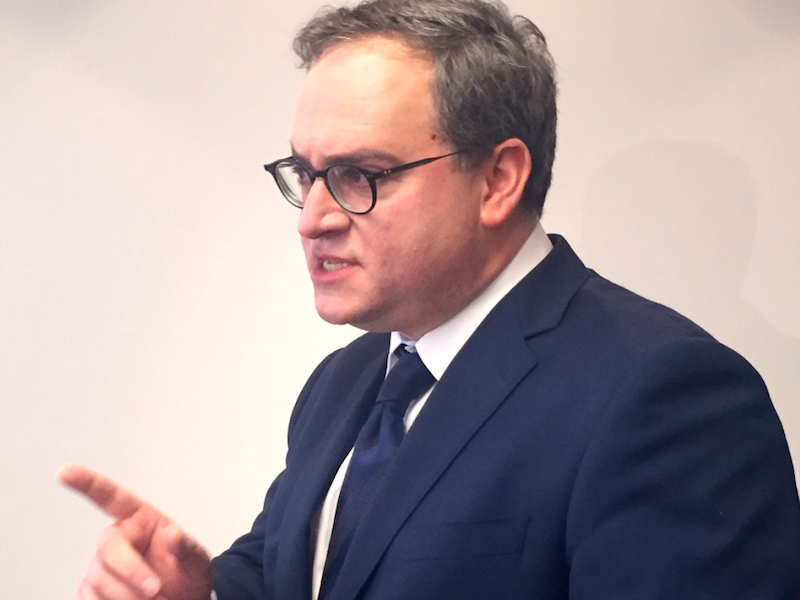 Ezra Levant, co-founder of right-wing Rebel Media, has had a lot of bad days recently. In a dramatic video released on August 17, the Canadian activist/lawyer/vlogger detailed the sordid saga involving a former employee who had allegedly been blackmailing him with threats of releasing sensitive information unless he got paid off. “And I don’t really know how to say it, other than to just say it,” said Levant. “And I can’t believe it, but here goes. I’m being blackmailed. I’m being extorted.”

The alleged blackmailer is 22-year-old Caolan Robertson, who Levant had hired to work with one of his star reporters, British anti-Islam activist Tommy Robinson. Levant's emotional mea culpa was in response to Robertson’s August 17 video in which he announced that he was leaving Rebel while also levying some serious charges of financial impropriety and editorial ineptitude against his former boss. As it turns out, Robertson had been secretly recording all of his conversations with Levant. He's got Levant talking about the “hush money” he'll pay his employee.

This complicates things for the 45-year-old right-wing provocateur, who Robertson also recorded talking about payments he made to former Rebel correspondents Lauren Southern and Jack Posobiec when they parted ways. The way Levant tells it, he hired the Brit filmmaker/social commentator mostly out of the goodness of his heart, as Robertson had been fired from his full-time job after appearing in an on-the-scene video with Robinson right after the London Bridge terrorist attack in June. He says he lent his new employee money for a new apartment, which he then used to take a luxury vacation, and that he'd get panicky calls from Robertson at strange hours asking that money be wired into his PayPal account.

On Twitter, Robertson denied using the loan to take a vacation. He claims that Rebel Media suffers from editorial lethargy and a lack of accountability over how it's using its crowdfunded donations. As Levant keeps his website’s financials private, there's no way donors can know that the money they're contributing to a project is actually going to that project. Robertson states flat out that it often isn't—that it's just going into the Rebel bank account, like much of the cash donated for specific projects.

Levant’s under siege from several fronts now. Conservative pundit Brian Lilley, who co-founded The Rebel, has announced he's leaving, partially in response to Rebel correspondent Faith Goldy’s one-sided coverage of the white nationalist rally in Charlottesville. In a post he wrote explaining his decision, Lilley wrote that Rebel Media has problems of “editorial and behavioural judgement that if left unchecked will destroy it and those around it." Perhaps one of those problems was Gavin McInnes’ Rebel Media video called “Why I hate Jews.” Levant fired Goldy when, after Charlottesville, she went on the podcast of neo-Nazi website The Daily Stormer. McInnis recently announced he's leaving Rebel too.

One breach of editorial judgment that Robertson mentioned involved what he said was a major electoral scandal he'd uncovered about the U.K.’s Brexit-favoring political party, UKIP, only to be met with indifference from his boss. He suggests it's because Levant wanted to stay on the good side of UKIP leader Nigel Farage, for business reasons. He writes of “aggressive emails” from the “Rebel Commander, who he says has an explosive temper that sometimes reduces employees to tears.

But the real problem for Levant is Robertson’s brutal dissection of Rebel Media's accounting and fundraising methods. He claims that Rebel is already flush with cash from its wealthy donors and that Levant’s playing the small, individual donors by pressuring Rebel journalists to make repeated videos pleading for funding that's not needed. The word was that Lauren Southern left Rebel via a mutual understanding, but Robertson states that she got fired after refusing to make a fundraising video for a trip to Israel.

The Rebel was already reeling from the fallout of the Charlottesville coverage, and now it looks like Ezra Levant’s going to get the worst of this “battle of the videos.” Why’s he calling it “hush money” if he's getting blackmailed? Levant says he released his video in an effort to “come clean” and break the cycle, but there's no indication that he'd have done so unless Robertson had fired the first shots with damning accusations.

Levant offers little evidence of what Robertson’s blackmailing him with, other than to say that his ex-employee told him he has some incriminating words on tape from Tommy Robinson that he'd release if not paid. It's when he's talking about Robinson that Levant is at his least convincing. Levant talks of a trumped-up charge that once put Robinson in prison, and suggests that Robertson’s tape could put him back behind bars, or at least make him more of a pariah than he already is in the U.K.

One has to wonder why George Llewellyn, Robertson’s business partner, tweeted on August 18 that they'd both been in touch with Robinson since the news broke—and were still friends—if Robertson were threatening to ruin his fellow British activist. Robinson and Robertson are ideological brothers, both adamantly opposed to the spread of Islam in the U.K., so this seems unlikely. If the former Rebel correspondent wanted to extort a current one for a few thousand pounds, why wouldn’t he do it directly? This will be an interesting struggle to watch play out, but the only advantage Levant appears to have is the ability to send more lawyers at his opponent. The future of Rebel Media looks precarious.