Sweating Steve Bannon and the Bullet From John Kelly

Wipe that phone when you’re done. 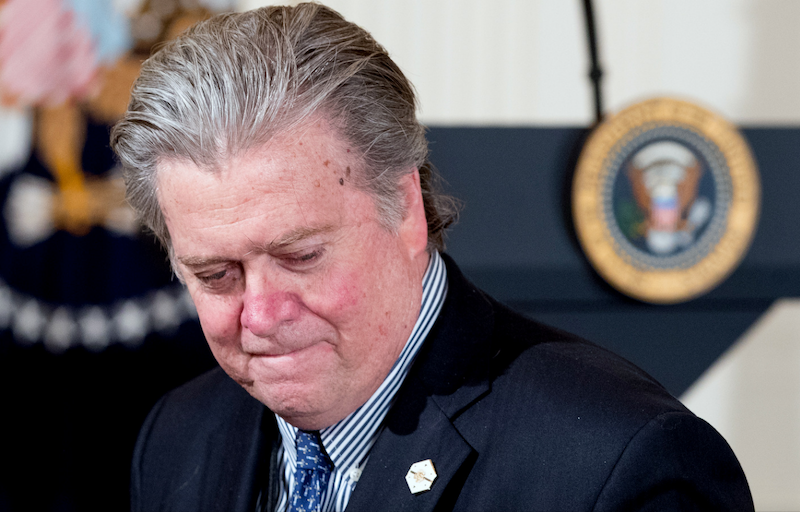 I like this picture: “As Bannon waited to hear his fate in recent days, he was keeping in close touch with billionaire ally Robert Mercer and other longtime friends and benefactors in conservative politics and the right-wing media community, expressing a desire to stay in the White House while also musing about what his future could be outside of the federal government.” I bet the musing was pretty loud, and so was the expressing. Steve Bannon strikes me as a person who raves into the phone and then feels better. Meanwhile, John Kelly is preparing a bullet.

The sentence about the Mercer phone calls is from an early version of the article The Washington Post ran on Bannon’s firing. “Inside Trump's circle, there have been two camps: those who argued he should fight to stay and be a political warrior for Trump's nationalist instincts and those who believe his battles with the ‘globalists,’ as he calls the more moderate wing of the White House, had reached their nadir,” the article tells us. “Bannon seemed to veer between those two sides in conversations with friends and allies.” The piece also touches on the anally-expulsive interview that Bannon did with The American Prospect. In doing so, the article gives us an idea of what it’s like to be a Bannon confidant: “When coverage of the candid interview exploded, he began to say that it was partly strategic, and most people close to him aren't exactly sure what to believe about why and how that phone call unfolded.”

Steve Bannon left behind many people who didn’t like him, and that may be his legacy. But he also left a lot of people who felt confused. Was he in or was he out? Politico: “The strategist was still shrugging off stories of his looming ouster over the past 10 days, calling them ‘bullshit,’ according to people who have spoken to Bannon.” Also Politico, same article: “Bannon, who has never been known as a team player, always knew his period of influence was limited, telling friends that he had a defined window in the White House during which he could push through his agenda.”

Bannon knew he’d get the ax sooner and not later, but he didn’t accept that sooner happened to be right now. Or else he talked a good deal of crap and didn’t consider how his comments added up. I suppose the two possibilities go together. He’s somebody who talks big and doesn’t reckon with the bill coming due. Now he’s been terminated by General Kelly. On this the Post is unflinching: “The decision to fire Bannon was made by Kelly, officials said.” The flinty chap did his deed in his first three weeks as chief of staff. Bannon spent those weeks making noise into a phone. Of course, he’s like his boss that way.

Bonus Trump. From The Washington Post’s updated version of the firing article: “Trump, meanwhile, had been upset about Bannon’s participation in a book by Bloomberg News reporter Joshua Green, Devil’s Bargain—particularly a cover photo giving equal billing to Trump and his chief strategist.” Green would go on CNN and talk about the book, and Trump would get mad. “Bannon’s critics noticed that Trump hated this narrative, and they would casually mention the book whenever they could in private conversations, slowly building a case against Bannon as a self-promoter,” the Post says. I don’t go for “building a case,” not if these were casual mentions. The fellows just had to keep saying the book’s name, and that did the trick.