And take down the pharmaceutical companies. 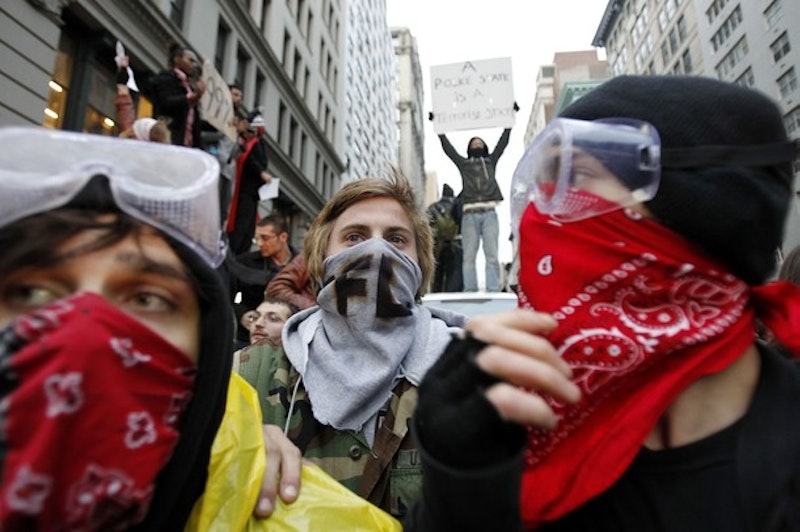 It was a curious week for the Occupy movement. 86’d out of Zuccotti Park by Michael Bloomberg’s henchmen and horrified by that lardo cop at UC Davis casually spraying kneeling undergrads with military grade pepper spray at point blank range, the movement’s been galvanized at just the right time, a few weeks before it got cold enough for people to start pussying out. The only way to remain relevant is to galvanize behind a slate of political candidates, but even after two months of big exposure, no one has emerged to lead the movement into office. Perhaps because Occupy doesn’t really have an ideology—its core is basically a ball of frustrated, vague anger at the way things are and appear to be. And while that rage is valid, when you have representatives, supporters, and hangers-on completely un-tethered by anything other than confused anger, your political power and ability to play the media game is significantly weakened. Whether it’s out of naïve sincerity or sheer ignorance, Occupy operates on the rules of the idealized reality they demand, without realizing we’re not quite there yet.

Deigning to brush off the hard policy work in favor of broad, meaningless gooey platitudes like “Occupy is about rebuilding Mutual Trust and Love in Community,” won’t work. Give me a break. You’re not on Sesame Street. We agree that the system is rigged and wrought with ossifying corruption, and that extreme progressive reform is necessary beyond re-jiggering the tax code and basic survival stuff like lowering unemployment. We basically need to learn how to re-think in this country, and take back our minds and bodies from companies like Pfizer and McDonald’s, and construct some sort of oversight that will prevent the average person from living as cash cows. We’re seeing the logical endpoint of totally unfettered capitalism killing us: Pfizer has the capacity to buy out every doctor on the block, so why not start giving kids Adderrall and Ritalin at age eight? What about Zoloft at 10? And you know the McScientists in Ronald’s McLab make their food more addictive and chemically super-stimulating in the worst ways every passing year. This kind of titanic industry only allows people to live lazy and unhealthy—and feel really good about it, too!

The Occupy Movement needs to bulk up if it wants to be anything more than a trivia question in five years. The narrow focus on Wall St. and occupying a small park no one ever cared about just opens the movement up to justifiable jokes. The dispersal of similar protests across the country only shows how widespread and justified their anger is—but it’s not getting us anywhere. We need to have 100,000 people march on Washington, not 50 people here and there sitting in tents and banging drums. But even more importantly, Occupy needs to widen its scopes—why haven’t Pfizer or Monsanto been targeted? The fantasy of a just world is certainly noble, but we don’t live in one, and Occupy needs to learn to play hard and nasty to get what it wants, just like the GOP does. They know we’re angry, but no one’s going to listen to a toddler’s temper tantrum—you need a proper manifesto. Anyone?