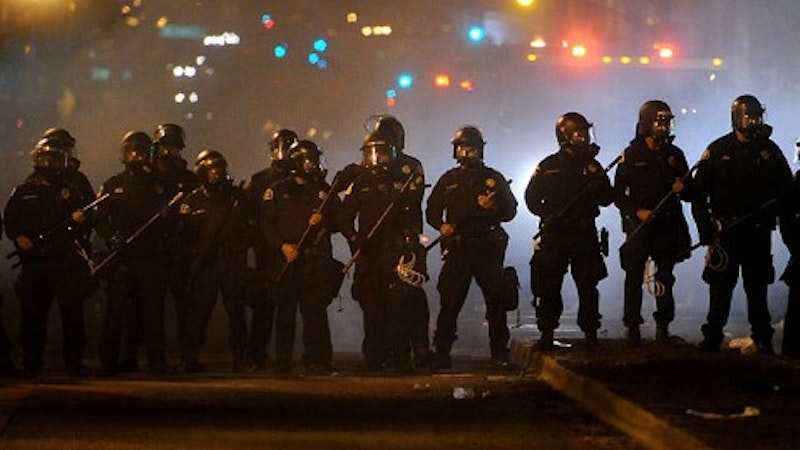 Recent “Occupy” protests have seen an influx of the “Black Bloc.” Anarchists by claim and deed, they show up to peaceful protests and, as one man put it so eloquently, give police an excuse to use guns and tear gas. It’s true: when you go to a grocery store and start trying to break windows a peaceful protests turns violent. If anyone can explain how property damage is non-violent, I’m all ears. But until then the Black Bloc needs to stay out. They certainly aren’t helping the cause and if anyone were harmed during peaceful protests I’d blame the Black Bloc for demonstrating how to screw over your fellow man.

You might ask: “How do I get rid of such a toxic crew before they ruin a perfectly peaceful protest?” The answer is simple. If you know some black people, call them and ask them to show up. As seen in the linked video, the moment a few black people show up, the Black loc reveals itself for what it really is. Future white-power advocates. I coined that PC term for white racism. Let’s do our part and use it in front of them and see how long it takes them to get it, if they do at all.

But why do I say they’re racists? And white? Why the stereotype? Because I defy you to show me a Black Bloc member that isn’t a Caucasian. Furthermore, show me a Black Bloc member who didn’t grow up into a Fox News-loving, Glenn Beck-subscribing household, and I’ll show you someone who’s managed to knock their life expectancy down from bad to worse. Most Black Blocs aren’t in it for the ideal; they’re in it to get something for themselves. For every argument they make there’s a counter argument written by a dead German showing them for the selfish, violent bigots they are.

Why is it so hard to see that Republicans and anarchists have so much in common? They both want small government. Both seek to justify the means of government such as law enforcement to protect mass wealth. I could go on all day. But really, Nietzsche did it much better and he’s been dead for more than a century.

So what does that say about the stagnantly Banana Repugnant anarchism? Same song and dance, only now so terribly out of fashion that it must seem like a bizarre trend that a certain crowd has to try out at least once.