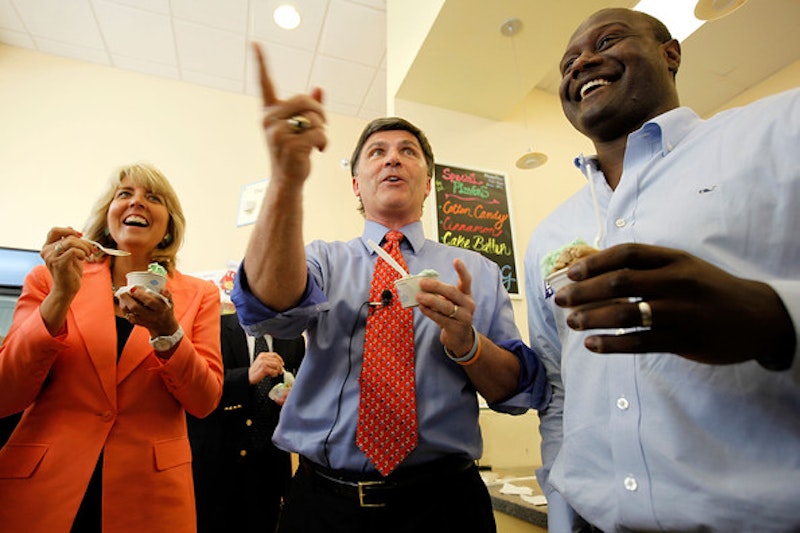 The trouble with publishing these days is that everyone who owns a computer is a writer and anyone who has a cell phone is a photographer. So let’s assume that former Maryland Gov. Robert L. Ehrlich Jr. (R) owns a computer, and a cell phone as well, which automatically makes him a contender to write a book, which he has predictably done, as many once-and-future politicians do as both catharsis and as a way of clinging to yesterday. As with most post-political screeds and how-to-govern manuals, the sentence is subordinate to ideology and is an instrument, no matter how ill-constructed, to transform past failures into future successes as Turn This Car Around promises to do.

There are really three phases of Bob Ehrlich: (1) The go-along, get-along young Republican of the 1980s in a Maryland House of Delegates full of Democrats; (2) The signatory to Newt Gingrich’s “Contract With America” who went to Congress in 1992; and (3) the obstinate governor (2003-07) who refused to budge from his dug-in positions on several critical occasions. Two of the three Ehrlichs would be comfortable in today’s Republican party. But the same Bob Ehrlich who, as governor, raised taxes, tolls and fees by $3 billion would definitely be out of step with the GOP that has been re-shaped by those anti-tax hellions Grover Norquist and the billionaire Koch brothers and their front-group, Americans for Prosperity. So, too, would the Ehrlich who supported stem cell research (as long as the word embryonic wasn’t mentioned) and who was, and is, pro-choice. Thus, without having read the entire book (its release date is Dec. 13) but only published excerpts, it is difficult to see precisely where the sub-titled “The Road Map to Restoring America” leads except backwards. Besides, Ehrlich himself is quoted as saying “The book is not for a Maryland audience” and “My answer is, I’m done with Maryland politics.” Not to be cruel, but it appears that Maryland politics is finished with Ehrlich, too, as the state has underlined with smashing back-to-back defeats.

If that is the case, why, then, does Ehrlich misrepresent the tidal wave that swamped his comeback try in 2010 by passing off his defeat to black allegiance to President Obama, who wasn’t even on the ballot? That is part of the case but not the entire story. The way Ehrlich presents his defeat undermines the voter delivery system of the brothers O’Malley, Peter and Martin, who is the governor who twice defeated Ehrlich, as well as the organizational skills of Terry Lierman, the state Democratic chairman who built the party into a major force for O’Malley’s 2006 election and long thereafter. Lierman is now chief of staff to House Minority Whip Steny H. Hoyer (D-MD). “My comeback bid got swamped by a large turnout of African American voters in Baltimore and the D.C. suburbs,” Ehrlich is quoted as writing. “A primary reason was the usual reason—large African American turnout spurred on by a renewed indignation toward conservatives generally, and tea party activists in particular.” O’Malley has uniformly received as high as 90 percent of the black vote in general elections for mayor and governor and in 2010 he defeated Ehrlich by 14 points, double his 2006 margin, and the biggest win of any Democratic governor in the nation.

What the passage does illustrate, though, is Ehrlich’s preoccupation with the black vote to the point where in 2006 his campaign bussed homeless blacks from Philadelphia to Prince George’s County to work the precincts. And in the same election, his campaign distributed literature in black warrens encouraging citizens to go to the polls on Thursday when, as every political hobbyist knows, elections are on Tuesday. This attempted act of deception led to a change in election laws under which two of Ehrlich’s campaign aides, Julius Henson and Paul Shurrick, were indicted for allegedly attempting to suppress the black voter turnout in the 2010 general election with misleading robocalls. They are awaiting separate trials. That matter is not addressed in Ehrlich’s book, according to reports.

Today’s Republican party is not the same party as it was when Ehrlich was elected governor nearly a decade ago. But a part of his governorship would be a perfect fit with the GOP of today. It is marked by Ehrlich’s stubborn refusal to compromise. Ehrlich made medical malpractice insurance a major issue, but when it came time to work out a deal with State House Democrats he refused to bend and killed his own legislation. Ditto slot machines. The House of Delegates passed a bill that was not identical to his own slots proposal. He refused to accept the difference (which could have been amended the following year) and killed legalizing slot machines for the remainder of his governorship. Each time Ehrlich refused to compromise he ended up getting far less than he would have achieved if he had reached an accommodation. This, despite several moderate positions, establishes the same hard-headed attitude that has paralyzed Washington and today’s Congressional Republicans.

Now here comes Ehrlich the philosopher/sociologist bashing the GOP’s favorite piñata, the media, and offering nostrums, not solutions, that constitute anything but a road map. “The commonsense majority must not back down when expressing or defending widely held commonsense attitudes, particularly when done to the dismay of the PC police and its intolerant and increasingly out-of-touch friends in the media,” as quoted in The Washington Post. Ehrlich once stepped in it (to borrow a phrase from Rick Perry) when he characterized multiculturalism as “bunk.” He argues in the book that there is “a major distinction between ethnic pride, which is appropriate, and multiculturalism, which is damaging to the society in my view.” Parse that.

So as far as can be determined from what excerpts have appeared, Ehrlich’s maiden venture as an author seems not so much a road map to the future but a sentimental journey backward into a political time capsule that has been obliterated by intransigence. Hence the title, “Turn This Car Around.” More accurate still, put the vehicle in reverse. Ehrlich seems hung up on nostalgia. There are some hints that he does not look favorably upon public sector unions, but does that mean he’d go so far, if he could, as banning bargaining rights as was the case with Republican governors in Ohio and Wisconsin? And there is a line or two indicating that he favors voter identification. Is he suggesting that he favors photo ID at the polls which, as in more than a dozen other states, would disenfranchise the poor, elderly and blacks? Not knowing what else to look for until the book fully reveals itself, it would be interesting to know Ehrlich’s views on the Ryan budget, which would eliminate Social Security, Medicare and Medicaid as we know them, or if he’d vote the party line on preserving tax cuts for the rich at the expense of the middle class. It would also be interesting to know which side Ehrlich would come down on in the divisive immigration debate among Republican presidential candidates. In the past, Ehrlich has labeled Maryland as a “sanctuary state,” an anti-immigration code-phrase which indicates that the state is lax in its enforcement of xenophobia. Ehrlich has said he has written the book from a “national perspective,” a hint that he might be seeking a voice as a TV talker or who knows what else.

We do know that Ehrlich has abandoned his early mentor, former House Speaker Newt Gingrich, and is supporting Mitt Romney for president. Ehrlich said in an interview that he hoped that his modest little formulaic reminiscence might become kind of a policy handbook for a Romney administration. Let’s see: That would make Romney pro-choice, which he once supported and now opposes; it would place Romney in favor of medical marijuana, which he opposes and views as a doorway to drug addiction; and Romney, like Ehrlich, would have to favor stem cell research, which he does, as long as it’s not embryonic, which purists view as a cop-out. Ehrlich has said that 99.5 percent of what he wrote survived the delete key and made it between the covers of Turn This Car Around. The few paragraphs that are available make clear that this is true. Ehrlich ought to feel a lot better after letting off all of that narcissistic steam.