The Reincarnation of Occupy Oakland

Can, will, and should it happen? 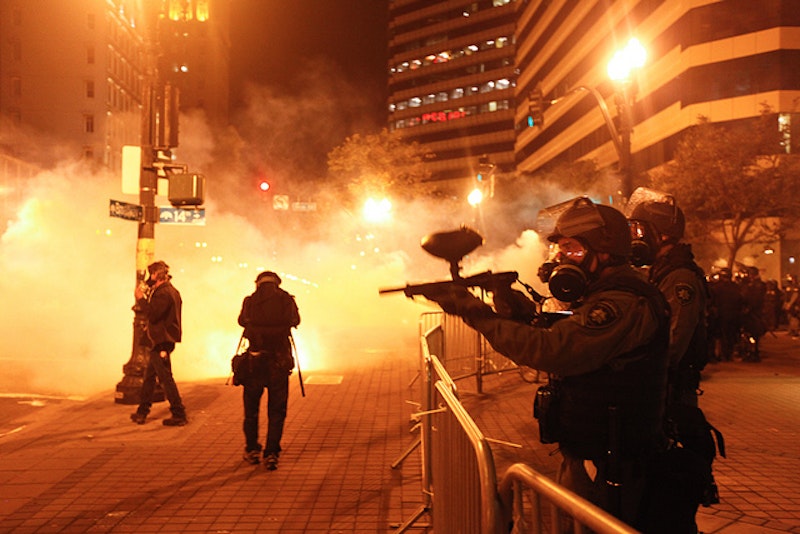 Oscar Grant Plaza is no more. The tents have been cleared, the makeshift city toppled—only one occupier remains. Mayor Jean Quan’s reputation has been irreparably stained, signs for her recall litter the city, and many are mourning the end of what was a largely peaceful, mostly successful protest—the most powerful civil engagement of most of my generation’s short lives, while others whose spirit hasn’t been crushed plot the next step in their impromptu revolution.

Almost every person under 30 I’ve met is an ardent supporter of the occupy movement, though not every young Oakland resident is sad to see the encampment at Ogawa Plaza uprooted. Samantha Strand, 25, artist and a founder of The Starline (an events space in downtown Oakland) wrote the following open letter to her peers:

Please try to move on, and find the next step in this incredible movement. Occupying Frank Ogawa is obviously not the right way to go anymore. Small businesses in Oakland (the 99%) are being hurt by the sad acts of violent perpetrators, and now sadly by the fact that a portion of downtown Oakland is taken over by tents. People (the 99%) are becoming scared & weary of Oakland once again, and businesses and Oakland residents are taking the fall for it.

It's not worth spending so much of Oakland's money on this. Money that could go toward making Oakland and Oakland's small businesses better. Fight for this. Fight in a way that does not waste so much money. Fight for your small businesses, your friends who have spent years making Oakland a better place. Find a new way. There is a new way. Find your own space. Make calibrated moves. Realize that it's about US, not you and them, but US.

I am completely behind spaces for active civic engagement. I know many people who are behind the movement, but are extremely uncomfortable with the tent situation. Let's make it a space for everyone. Daily meetings/lectures/organizing—yes! In and out, every day. Learning, educating, a space to bring people together from all walks. Making changes in a way that tries to respect many different ways of living.

Sam makes an excellent point, perhaps occupying the plaza has run its course and it’s time to move on. It’s easy to point out the costs associated with the protests—especially the hundreds of thousands spent on the raids themselves, and say that money could be better spent. Those costs are quantifiable, you can attach a dollar figure, but how do you attach a monetary value to civil engagement, to helping people realize their own agency?

For all the flaws, all the “safety concerns” that have prompted the raids, all the confusion over what exactly the point of shutting down a city is, the most important reason to keep something like this going is to encourage young people to participate in government, take responsibility for their actions and organize something more meaningful than a Facebook group. Another young Oaklander, Christina Parker, had this response to Strand’s open letter:

Another way to say this might be... Hey Oakland city officials, instead of demonizing social activism, embrace your citizens’ participation in government! Help with services for the camp and engage in dialogue with constituents so we can work together! Polarizing and attacking the movement have led the people to respond with attacks. This may have harmed small businesses, but business in downtown could also be bolstered by participation. During the general strike I used a bathroom at a burger place that faces OG plaza and the line was like fifty people long. People felt safe at the general strike during the day, they came out to downtown, participated in activism and supported local business. It doesn't have to be encampment or business, it can be both if we don't push the movement to the fringes of society.

I’ve never been in a more charged atmosphere; my first trip down to the plaza came on November 2, helicopters circling over head, a couple friends and I blissfully unaware of the events about to transpire.

Curious to check out the scene in the city after a few weeks in the relative isolation of Northern California, we headed downtown on foot around 10 p.m. Besides the aforementioned (and certainly menacing) helicopters, there didn’t seem to be much of a police presence in the general vicinity of the protestors—nor did there seem like there was any imminent danger that might require a show of force. People were skateboarding, passing out pamphlets and talking in small groups, though I did see a few people drinking.

We circled the plaza admiring the community that’d been built, organized and maintained in the shadow of City Hall. There was a medical tent, a kitchen, an interfaith prayer room and just about every other amenity you could ask for—including at least 30 porta-potties. As we rounded back towards the crowd a block up on 16th St. I got a text from a friend: “Heard the police were on their way. Going home.” A moment later the Occupy Oakland twitter warned that cops were gathering and donning riot gear a few blocks north at the Greyhound station. I asked my friend if he wanted to leave. “No, let’s stay,” he said, and a moment later someone was rolling a pallet of bricks down the street yelling, “Let’s stand our ground!” “Okay, he said, “Now we can go.”

At that point we realized the crowd was starting to panic at the news that the police were starting to march. Trying to decide which direction to head, I looked up and realized I was standing directly in front of the abandoned building protestors were occupying—the apparent target of the oncoming raid. Both ends of the block were packed, and my friend and I were quickly separated.

I went west; pushing my way through the crowd standing off against a line of stoic cops a block away. Just as I was about to cross the street I turned around to what I thought was a small fire someone lit between themselves and the police. Then it hit me, it was tear gas, and the cops were no longer just standing there. I was lucky to be on the periphery—20 feet away kids were screaming and retching—and was able to circle around behind the first line of police before they started firing rubber bullets. Trying to find my friend and stay out of the melee, I headed north only to find that there were cops everywhere. As a solitary pedestrian, none paid me very much attention as I lingered, semi-dazed and somewhat intoxicated by the moment.

I’ve never experienced anything quite like the rapid mood shift when the police arrived and the sheer terror of staring down 500+ police in riot gear, brandishing guns and billy clubs, paddy wagons at the ready. My immediate response was flight—I wanted nothing to do with the mob, I felt no desire to fight.

But clearly, there is something here worth fighting for.