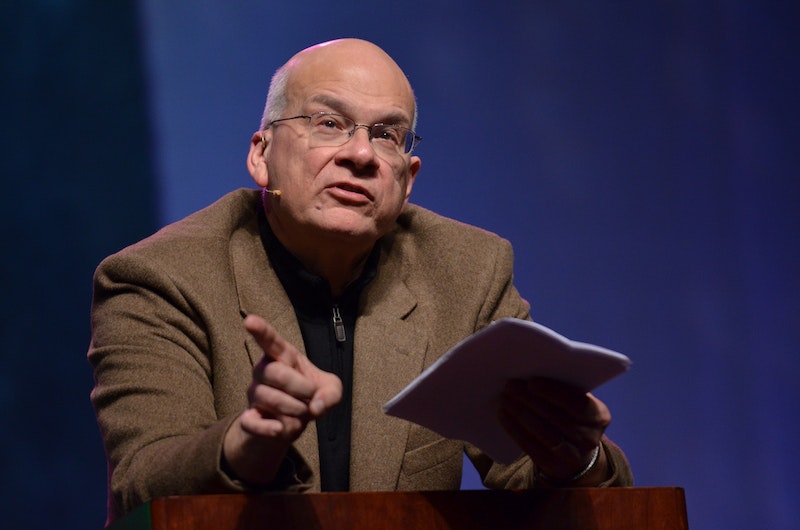 Well like I said, first of all, the idea of marriage is not, I don’t think, should not be for the fulfillment of the individual, so it’s a public trust for the building of community… I do think the best way to do that is between a man and a woman, because what you’re doing is bringing the complimentary genders together. And I do think that brings more stability […] Christian marriage says… the genders both bring something to the table that… completes the other. So, in the long run, what Christians say marriage should do, cannot be done between two people of the same gender. So I wasn’t saying that the only reason to bring the two genders together is to make marriage more stable—there’s actually more of an inner-lock that happens—the genders clash, and mesh: they knock the rough edges off of each other, but they also mesh because they bring some complimentary differences to each other… So, basically, the Christian idea of marriage is something that goes beyond what the modern view is, that is simply "I just want to be fulfilled."
Parsing this quote from Rev. Timothy Keller, a New York theologian with a new book out (The Meaning of Marriage), is a process in masochism. On the surface, the Reverend is congenial and deferential, passive aggressively advocating his obsolete way of thinking. It’s only natural: even as religion refuses to be marginalized, people have become less religious (mostly out of sloth, not thought), and the hardline Falwell/Robertson/Phelps approach to Christianity and the word of God has practically died out. Even still, people blindly accept their values and adopt a vague Christian worldview because it’s comfortable and easy. I get it. But to willfully ignore reality, that’s what children do. Why are we still like this?

As most every church’s positions on social issues like birth control and homosexuality have evolved along with the culture, their ancient views of the world become increasingly more strained and apparent for what it is: an ignorant sham. Listen and watch the way Rev. Keller answers Willie Geist’s question if same-sex couples are in fact more stable statistically than their heterosexual counterparts. “Christian marriage says… the genders both bring something to the table that… completes the other. So, in the long run, what Christians say marriage should do, cannot be done between two people of the same gender.” I mean, really listen to what he’s saying: he prefaces this stupid and bigoted idea with “Christian marriage says…,” as if that negates the fact that it’s a regressive and outdated way of looking at sexuality and marriage.

Although those like Rev. Keller may be good, honest people who help us in the short term, in the long run they will kill us. This kind of non-thought, this assumption that a corrupt, for-profit multi-millennial cancer of the mind should have any say or insight into what we should do or where to guide the human spirit—it’s taking us backwards. Joseph Ratzinger and all the desperate theologians are just as confused and useless as Herman Cain. If your creed is so malleable and able to conform to the times, can anything you say really mean anything at all? It’s a magic show, and it always has been, and what fills me with sorrow is that we haven’t accepted that yet. Faith is the death of thought and curiosity, yet it’s regarded as a virtue that will get any presidential candidate a hearty round of applause on the stump. To believe in something with no evidence whatsoever, just because someone else told you it was so. Stupid. We don’t just have problems with money—we have problems with reality.