The nation may be better off for the demise. 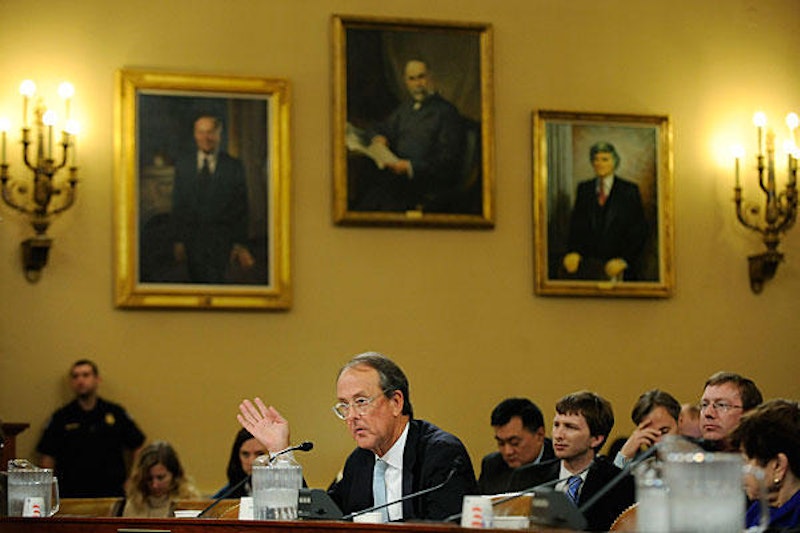 Here’s a lesson in basic economics for Republicans and others who don’t get it: The so-called congressional bipartisan super committee is likely to fold this week without accomplishing a single thing except to expose the gaping flaws in Republican economic thinking. The super committee is charged with cutting $1.2 trillion from the budget by Nov. 23. There is a durable fable within the GOP that less is more when, in fact, it is merely less. They argue that cutting taxes for the wealthy and for corporations will produce revenue that will stimulate the economy and create jobs. The kink in that thinking is that corporations are already sitting on $3 trillion in profits they are not investing, and the 10 largest banks control 60 percent of the wealth and are not lending, all because there’s no demand. Revenue and the $15 trillion deficit are not the problem. Lack of demand is. Economics is about money in motion. As long as money is stagnating and not moving through revenue pools, pockets and cash registers, the current economic depression will continue.

So a small group of Republicans broke ranks with the anti-tax wing of the party, and advanced a bright idea: They offered $300 billion in tax increases, not directly but through revisions in the code, in exchange—and here’s the catch—for making the Bush tax cuts for the wealthy permanent. Does anyone doubt that President Obama would have caved by now? But Democrats on the super committee saw through the ruse and rejected the proposal. As E.J. Dionne Jr. has written in The Washington Post, if Congress does absolutely nothing, the Bush tax cuts, along with other budget cuts, will expire in January, 2013, and the combination will produce $7.1 trillion to be applied to the deficit. Meantime, the apostate Republicans who now favor some form of a tax increase are feeling a swift backlash from conservative anti-tax groups. Americans for Prosperity, funded by the Koch Brothers and the most aggressive of the groups, as well as the anti-tax enforcer, Grover Norquist, are applying pressure by targeting certain Republicans and running anti-tax radio commercials in selected states.

Tax cuts for the wealthy as a form of job creation and deficit reduction are the twin hallmarks of Republican orthodoxy and nothing more than regurgitated trickle-down economics. In its Ronald Reagan era heyday trickle-down economics was little more than a buzz-phrase that has since been totally discredited, even by Reagan’s own budget director, David Stockman. Today’s Republicans who cite and quote Reagan know little of his record. Reagan, as governor and president, raised taxes 11 times.

George W. Bush pushed through back-to-back tax cuts for the wealthy in 2002 and 2003, and recent studies, including one by the non-partisan Congressional Budget Office, show that tax cuts do not create jobs or stimulate the economy. Despite the two tax cuts, Bush’s eight years as president produced the lowest growth rate in the economy of any eight-year period since World War II. The Bush tax cuts, the illicit war in Iraq as well as the housing market collapse are the major causes of the current economic slump and massive deficit. Interestingly, they all occurred under a Republican president. All tax cuts do is to produce less revenue for the treasury. In fact, the estimated 26 million unemployed, underemployed and those who’ve given up, are beginning to affect dedicated funds such as Social Security and Medicare as well as income tax collections because of the diminished number of employed contributors.

Republicans and Democrats on the super committee, which is supposed to be a microcosm of Congress, are intent on protecting their constituencies at any cost. Republicans are determined to preserve tax breaks for the wealthy at the expense of the middle class, and Democrats are fighting to prevent cuts in their cherished social welfare programs and want to increase taxes on the wealthy to produce revenue. Republicans want to reduce the deficit while most Democrats argue that the deficit is not the problem but a lack of spending is. So, in effect, Republicans would cut Social Security, Medicare and food stamps for the poor, the elderly and the middle class to fund tax cuts for the wealthy. Those constituencies, it should be noted, include the financial industry, the health care industry and the defense industry—three among the six largest contributors of campaign funds to both parties. To wit, there are 299 millionaires in Congress, who resonate more with the one percent of the population than the 99 percent who are represented in the Wall Street protests. And in a twist, if the super committee does nothing, the automatic cuts in spending that a lack of action will trigger will affect the defense industry, which has an employment base in every state and virtually every congressional district in the country. (Maryland would be among the hardest hit because it is joined at the hip with the federal enclave, the District of Columbia, and is host to many defense installations and industries.)

When the super committee was created to avoid a possible default, each party appointed a half dozen of its hard-liners who were assigned to defend their party’s well-documented ideological positions. Every credible poll shows that majorities of the voters support increasing taxes on the wealthy. Those majorities include Republican voters. Even many wealthy people have come forward to say they’re willing to pay higher taxes to help resolve the nation’s economic difficulties. As if that weren’t enough, Obama has once again cracked the magic number in the polls and is now above 50 percent in approval ratings (Pew Research.) In fact, revenue has slipped three to four percentage points behind the amount of money that it costs just to keep the country chugging along at its current petty pace. Borrowing has increased and will continue to increase as long as the economy is stalled by a lack of demand. The collapse of the teetering Euro, a serious possibility, would also add to America’s economic woes because the dollar would soar against that currency and foreign nations would be unable to afford our exports. This, in turn, would add to a lack of demand and create even more joblessness in a vicious roundelay that keeps feeding itself.

The voice of the people is the primal scream of enough is enough and is beginning to translate into a nationwide uprising. The Occupy Wall Street movement is its physical manifestation but there’s a mental presence that resonates as well. In Ohio, voters beat back Republican Gov. John Kasich’s union-busting legislation to deny workers bargaining rights. In Wisconsin, a recall effort is underway to eject GOP Gov. Scott Walker from office. And the ardent populism of Elizabeth Warren, the consumer advocate who’s running for the U.S. Senate in Massachusetts, is a campaign model that Democrats ought to copyright. In addition, the banking industry responded to the rage and fury of the public by cancelling its announced fees for debit card transactions. In short, the public is riled up, unforgiving and determined not to be messed with.

Politics and economics are uneasy partners. In today’s world of global inter-dependency and national hostility, they co-exist in a fragile relationship that defines political parties as well as philosophies. Republicans hark back to the politics of Herbert Hoover, Milton Friedman, their latest darling, Friedrich Hayek, and to the Darwinian notion that screwing each other will improve the breed. The GOP’s economics and its political rhetoric may appeal to the party’s base to win primary elections but there’s little chance that it can embrace the broader electorate and win the general election.