Commander in Chief of Appearances 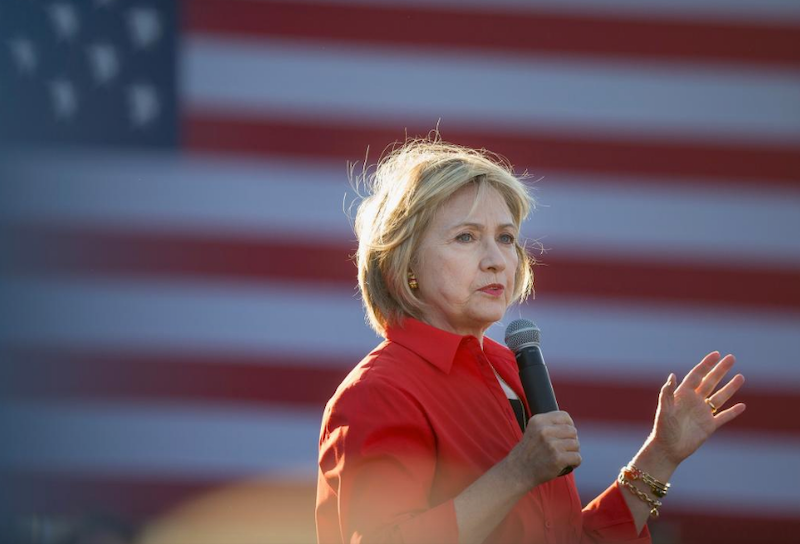 Hillary Clinton is a transitional figure in the history of American gender, and a wildly conflicted one: liberated and subordinate, pre-and-post-feminine and pre- and-post-feminist. Perhaps she's emblematic of a certain race-class-age cohort, arriving just post-Betty Friedan and post-Pill, a devotee of women's "empowerment" who is still inhabited by many of the desires and internalized expectations of the previous generation.

From a feminist standpoint, it would be rather unfortunate—all things being equal—for the first female President to be the wife of a former President. And it's particularly fraught that she is Bill Clinton's wife, and what sort of wife she has been. She rose to power in the same manner as women in back-in-the-day patriarchy, hitching her wagon to a promising man and helping drive him forward, pursuing her own ambitions through his career. But then she transitioned to more direct and independent forms of power as a Senator and cabinet secretary.

She's overcome the gender hierarchy, in a certain way, but she embodies it too.

Everyone seemed to demand at convention time that Hillary "humanize herself," that she show "the very real person behind the facade," etc. I seem to remember similar demands for Al Gore and John Kerry, and they responded with images of the candidate fishing or sailboarding or something, with mixed success. With Hillary, "humanizing" just meant showing her in traditional feminine roles: Hillary the mother and wife; Hillary the nurturer, now ready to nurture all of America's children. "The children" is a traditional housewife/first-lady assignment; it is both policy-ish and gender-appropriate.

Chelsea presented her as a full-time homemaker, with some tensions. But even if Hillary made efforts, this is just an impossible picture, and not compatible with the hard-charging career woman working as a lawyer, fixing Arkansas' schools, campaigning, developing a national healthcare plan, etc. She's portrayed as both a perfect example of bourgeois gender norms circa 1958 and as the most qualified person to be the leader of the free world. It's a hyperbolic "super-woman" problem, again a transitional dilemma: career or family? You can have it all!

I'm not sure how well this connects with the experience of younger generations of women and I see my 28 and 16-year-old daughters sort of rolling their eyes. Hillary's dilemmas are not their dilemmas.

Now, one role of the 1958 homemaker was to be the commander-in-chief of appearances; an important part of the job was making it seem okay from outside. The house might be roiling with dysfunction, or it might not be, but you wouldn't be able to tell by the outfits and the smiles of the junior leaguer. Meanwhile, dad could misbehave pretty badly as long he showed some career success.

It was perhaps her job to make sure his problems didn't leak through into public space; that was one of the ways she aided her husband's career and nurtured her kids. I think this might partly account for the sense that "we've never seen the authentic Hillary," or "people don't feel like they know her." I also think it might account for why she goes radically weird around, for example, her emails: we do not want that kind of peek into the Clinton marriage.

She's spent much of her life in stand-by-your-man damage control, which is terribly in tension with her "empowerment" feminism. I'm going to speculate that this corresponds to a wildly conflicted set of desires, a terrible set of personal and political dilemmas.

Perhaps we still await the real breakthrough: the candidate or president who is not only a (contradictory) symbol enacting a gender drama; someone who is less confused about who she is; someone who, without an extreme effort or enactment, is really herself.

—Crispin Sartwell is the co-author, with his daughter Emma, of the YA novel Soyder's Rebellion.