Climbing off the monster before it devours him. 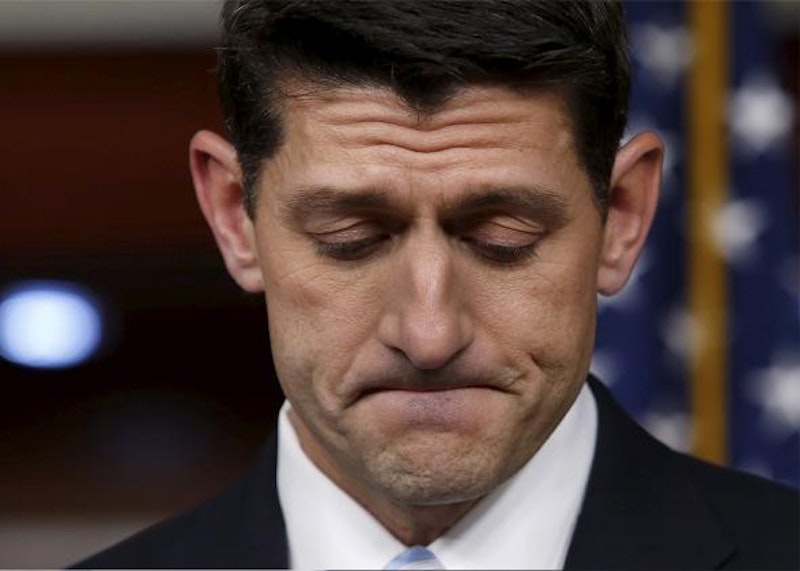 To give him credit, he never lost his touch. Paul Ryan delivered seven minutes of “spend more time with my family,” that ancient excuse, and made it sound like he was confiding his heart. TV commentators lapped it up. No one could question the truth of Ryan’s alleged motive, one said. Well, all right, but here it goes. I’m sure Ryan wants to spend more time with his family, and that they and he will enjoy it. But I bet that’s not his chief motive.

Two and a half years ago, a Speaker of the House stood before reporters and sang a chorus of “Zip-a-Dee-Doo-Dah” because he was leaving power and wanted to show he wasn’t down-hearted. John Boehner had battled the House Republican Conference and lost, and now Ryan has lost too. He climbs off the monster before he’s bucked off, and walks away explaining he has other things to do. But two-and-a-half years aren’t much time to be Speaker; for the past 50 years, the average time in office has been closer to five. Boehner just about managed that. Ryan didn’t come close.

Also, Ryan leaves before his big jobs have been done. What about entitlements? What about spending? He had a master plan by which government would be folded up like a paper airplane, revamped and shrunk into something smart and unobtrusive. Instead it’s still full-size and flopping about. The last big thing Ryan passed is a spending bill disdained by such true conservatives as Donald Trump (“I will never sign another bill like this again”).

This last situation illustrates Ryan’s fix. Consider that Trump, a man who cares about little and understands nothing, gets to curl his lip at a spending bill because it isn’t conservative enough. Ryan, the life-long Randite and Reagan idolator, must stand and take it. That’s because Trump is king of the conservatives now, and the tribe chose him because he has the loudest mouth on earth. American conservatives have civic life mixed up with ejaculation. They don’t want government, they want spasm. Get in the middle of that and you’ll have a headache, so Ryan’s getting out.

There’s no sign that the pitching and tossing will end. When Ryan took the job, there was a particular item he insisted on: removal of a rule that allowed anyone in the House to put the Speaker’s job up to a vote. This rule had been a terror for John Boehner: some edgy young gun on the right might force a vote, one in which a few more of the right-wingers might vote against him and let the Democrat win. In the months before Boehner left, talk about using the rule grew louder in the House Freedom Caucus, that nest of troublemakers. Ryan wanted the rule eliminated before he’d be Speaker. But the rule’s still there. The hard-liners wouldn’t give up that lever, and meanwhile the House needed a leader, so Ryan gave in. The hard-liners reciprocated by forming an etiquette against speaking of the rule—Rep. Mark Meadows primly said an aide’s joke about using the rule was “not funny.”

It’s good to see the tribe groping toward civilized norms. But the members are there to disrupt, which is why the fiscal extremists are so friendly toward the highly disruptive Trump. Whoever becomes the next Speaker, he’d better be close to Trump or worry about the sword finding his neck. Meanwhile, Paul Ryan can play Frisbee with his kids and reflect that a philosophy of extreme anti-collectivism in governmental matters might get wrapped up in and perhaps suffocated by a lifestyle of extreme individualism practiced by media consumers who’ve come to see political life as a vehicle for fantasy displays of dominance. Anyway, I bet he’s a great dad.