The End of Political Performance

Elizabeth Warren and CNN thought they had the most fire collab of the year. It backfired. 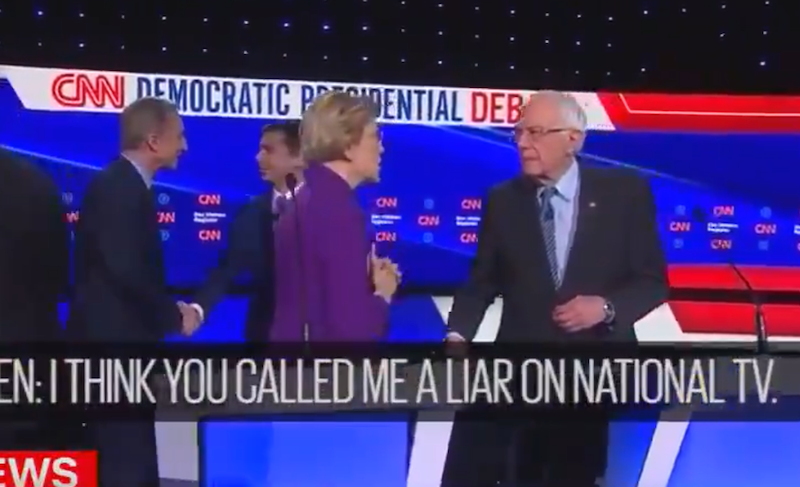 The sub-hed above is a reference to this meme format, a humorous juxtaposition between “nice” signs (small animals, inanimate objects, white women), and “urban” or “‘sketchy’” signifiers (rap music, black men, drugs). Cultural appropriation was one of the phrases of the decade, and now that the 2010s are over, the “woke” lexicon it belongs to is collapsing. These were common phrases in academia and black culture, respectively, for years before the awful “Social Justice Warrior” emerged as a slur, as if being an advocate for social justice was something you shouldn’t fight for. But the world that coopted “woke” causes late in the 2010s—centrist liberals ensconced in corporate media—never cared what any of it meant beyond fulfilling a quota. Picking a president isn’t like catching Pokémon, but every major news organization still wants to pretend that Americans are window-shopping for a candidate. This isn’t a casual decision.

Et tu, Elizabeth? I don’t want to speculate on the emotional state of U.S. Senators, but I can’t imagine it felt good to be stabbed in the back by one of your only friends in Congress, and the person you had the most parity with policy-wise only six months ago. Now Warren has abandoned all pretense of a progressive agenda, and intoxicated by former Obama and Clinton staffers on her team, has decided to kamikaze Bernie Sanders, either to get the last debate boost, or distract from inevitable DNC candidate Biden from embarrassing himself too much. This is to be expected, this is a primary. But Warren’s offensive, disingenuous, and incompetent attempt to smear Sanders as a sexist and make everyone remember 2016 is pitiful. Vague thoughts of short blonde bobs, pantsuits, MAGA hats, and a search for someone to blame.

“Bernie Sanders shouldn’t have run in 2016.” No, he shouldn’t have. Elizabeth Warren should’ve. As he said on Tuesday night, Sanders tried to get in her against Clinton. She deferred, he ran and did unexpectedly well. But not enough to win. I think Warren could’ve beaten Trump the first time, it was a different dynamic: superficially they’re identical, but there’s no way Warren would’ve skipped the Rust Belt. She would’ve had a scandal on the level of “Hillary’s emails” with her Native American lies, so that would’ve been a wash. Clinton barely lost to Trump, and 101 small things went in his favor for that to happen. With Warren, there would’ve been no Comey letter October Surprise, and after the Access Hollywood tape, it’s not like Trump could’ve pulled out a panel of Warren’s alleged rape victims (though that would’ve been mildly amusing)

It’s so funny how these things that determine whether or not a hospital in Baghdad gets bombed or not often come down to internecine television news disputes: CNN has been roundly roasted for their blatantly biased and utter incompetency in concealing it. Pushing an anti-Sanders narrative that exploited #MeToo language was too much even for MSNBC’s Morning Joe and Hardball. They both featured segments in favor of Sanders and aghast at the behavior of the Warren campaign and CNN’s complete abandonment of journalistic integrity. Chris Matthews says, “Bernie is the candidate to beat,” and Mika Brzezinski says it’s “just stupid” to think that Sanders would ever seriously say that a woman can’t be elected president. This isn’t coordinated, this is slapstick, and the networks are having fun with each other now. Presidential politics finally meets the liberal entertainment press, who don’t know how to play the Fox News game. It’s bizarre to see such unfettered bias on CNN, so out in the open: ironically, despite the obvious ideological agenda of the network, I think Fox would host a fair debate with these candidates now. What do they have to lose?

In the introduction to his essay collection Class Notes, Adolph Reed Jr. diagnosed the problem holding the left back in America: “Even in what passes for a left public sphere there is little sense of creating a movement as an activity that rests on organizing, working actually to build support and solidarity among real people in real places around concrete objectives that they perceive as concerns... Instead, the more gestural approaches to politics associated with the flight from concreteness have been much more prominent and visible, and tend to monopolize public discourse about the left. That results mainly, I suspect, from circumstances that the left public sphere itself is sharply slanted toward the social world and sensibilities of disconnected left intellectuals and political celebrities and, to that extent, reflects the symbiosis of defeatist thinking and wish fulfillment that have come to shape political thinking in such quarters.”

He writes that other than organizing, “there are not alternatives other than fraud, pretense, or certain failure.” This is why Warren’s attack on Sanders’ character fell flat: she and CNN immediately exposed themselves as vaudevillians. Nobody believes Sanders is a sexist, and even those that are warm to Warren (like Ryan Grim) saw this week for what it was: a stupid, last-minute piece of political theater that went over like The Producers in Hamburg. We knew Warren was “a capitalist to [her] bones,” and as if we needed any further confirmation, she’s a team player. And if that means ratfucking the person closest to you in order to come in third or fourth in Iowa, then it must be done.

Almost everyone is sick of this. But there will be comparisons of Sanders to Trump, because they both say, "I'm pissed off, I know you're pissed off, and here's why..." Right now in America, Who would disagree with those eight words? Thank God one of them isn't an ignorant, hateful liar. Bernie Sanders doesn't need theater. Neither did Elizabeth Warren and her team. Too bad they panicked.