B or S Beats Trump

A considered look at the campaign proposals of Joe Biden and Bernie Sanders make it clear they are the ones to beat. 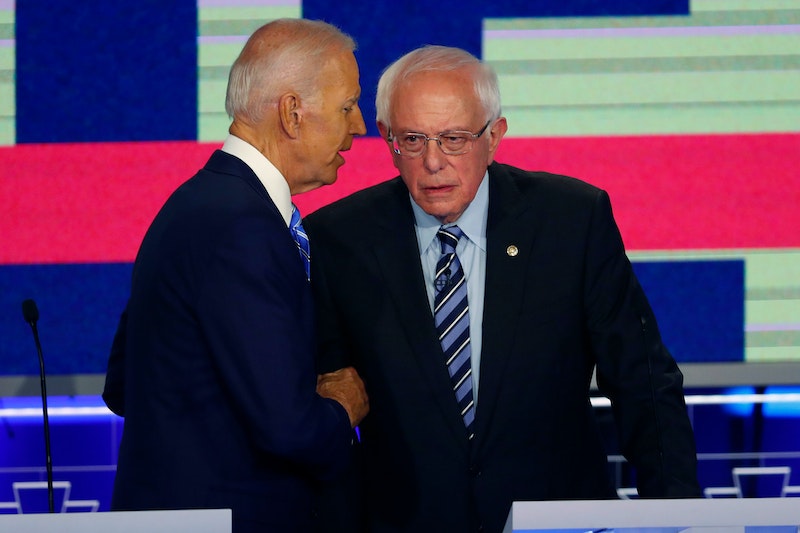 In my home state of Illinois, the Democratic primary vote is on St. Patrick's Day, after the early primaries and Super Tuesday. I've tried not to become attached to any specific candidate, and just consider who’s most likely to be on the ballot on March 17. From this perspective, it looks like the race is between Joe Biden and Bernie Sanders. As of now, I’ll very likely vote for Joe Biden. Neither is my first choice, but Biden appears to the best positioned to beat Donald Trump in November.

The matchup between Biden and Sanders is symbolic of the internal strife within the party, most distinctively and respectively, between moderate and progressive wings. I'm more interested in consistent patterns of polling data over several months rather than dealing with a weekly neurosis. At nearly every turn, Biden comes out ahead, and has usually polled ahead of Trump. Sanders' weaker spots are older white women, and black people overall—and these are the groups that will have the most impact in not just the primary, but the general election. He’s most consistently popular with white men under 40, and they're not a reliable voter pool.

Analyzing voter demographics is the easy part. The battle between progressives and moderates is getting uglier, and won't end after the general election. What bothers me about Sanders, and his progressive constituency, is that they're aiming to govern the America they wish they had, not the America that actually exists. Nowhere is this more acute than examining the different approaches that Biden and Sanders take to healthcare.

Biden aims to strengthen the existing Affordable Care Act, and, most notably, resurrect the public option as it was originally proposed in 2009. He also wants to crack down on the 14 states that refused to expand Medicaid under the act, and reverse changes made by the Trump administration, particularly the cuts to reproductive healthcare. Sanders' Medicare-For-All plan is largely what it says in the name, and would be a massive overhaul of the healthcare system. Healthcare is the most intimate business that’s affected by government policy, and single-payer ideas are often seen as a federal intrusion in a capitalist society. Where Biden and Sanders have the most in common is a proposed willingness to rein in prescription drug costs, and I think Sanders makes his most practical case in looking to expand international trade. I think a President Biden has better shot at building bipartisan congressional support for tweaking existing laws, especially if Republicans maintain control of the Senate.

One area where Sanders surpasses Biden is his ability to adapt to the reality show nature of contemporary campaigning. He's already racked up memorable quotes ("I don't care about her damn emails!" and "I wrote the damn bill!"), proving himself to be quick on his feet, and Sanders taking on Trump in a face-to-face debate would make great television. I admire Biden's courage in discussing his life-long struggle with stuttering, but the personality quirks that’ve made him both endearing and frustrating to Democrats are cannon fodder for Trump.

Ultimately, I think Biden might have a shot at beating Trump because Sanders, and his supporters, appear to underestimate the Republican smear machine. Even before Trump, conservatives whined over Obamacare death panels that didn't exist, and still persist in attacking reproductive healthcare using arguments easily disproved by very basic science. The same Republicans who spent the past decade smearing Nancy Pelosi as a "San Francisco liberal" are eager to have a go at an out-of-the closet socialist. These tactics might seem crazy, but they’ve worked over the course of the 2010s, where Republicans won, and frequently maintained, control of a majority of state governments and Congress.

Some of the best campaign analysis is coming from the #NeverTrump conservatives. I was listening to former Florida congressman David Jolly on Charlie Sykes' podcast, where they made some insightful observations about the appeal of Biden over Sanders. Socialism doesn't appeal to rural Americans old enough to remember the Cold War, and Jolly suggested that "the politics of Twitter don't translate to Main Street." Sykes was more specific, saying that Trump, as a known awful, would easily best Sanders, an unknown awful: "And I'm thinking where are guys like us gonna go, what are we gonna do if it is nationalism versus socialism?"

Biden has a better chance of winning back Obama voters who went for Trump in 2016. He's thoroughly vetted, but the most substantial part of his appeal is a supposed sense of normalcy. For all of my doubts about Sanders, I’d still vote for him in the general election. It's disappointing that other candidates that I liked more than Biden and Sanders haven't done as well in the polls, but I still regard these two gentlemen as potential presidents.