MLK’s voice was not made for whining. 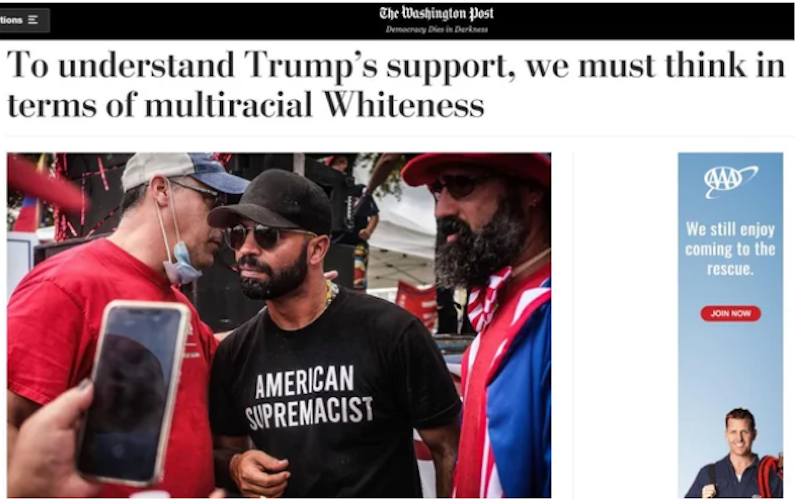 Today, if conservatives or libertarians express great sympathy for Martin Luther King—and his vision in which individual character matters more than skin color—they often get accused of being cynics and insincere opportunists who just want to squelch newer, more radical, ostensibly better versions of leftist racial activism. Rest assured, though, that a more individualistic, less tribal approach to race relations—on both right and left—would delight me.

Furthermore, as in King’s case, someone targeted by the feds always has to yield at least some extra sympathy.

If you want real cynicism, insincerity, and opportunism on the topic of MLK, consider instead Vice President Kamala Harris, the former ruthless attorney general of California, who plagiarized a story about purportedly telling her mom she wanted “fweedom” when she was a child because she’d heard the Civil Rights movement use the phrase. But hey, the old white man in charge of the country who placed her a heartbeat from his own job has repeatedly plagiarized too. And their pal Hillary Clinton made up stories about, for instance, being named after mountaineer Sir Edmund Hillary and not being a criminal.

As those politicians remind us—and as activists such as MLK were painfully aware—there’s a thin line between criminals and politicians, so the latter are hardly in a position to tell us which activists and which models of social reform are morally worthy. It’s no surprise that the Biden crime family gets along so well with cop-in-spirit Harris, just as it’s not surprising the Mob runs many police precincts (or for that matter that federal police and intelligence agencies run major media, as Tucker Carlson has recently lamented).

Still, the authorities, against whom all of us, regardless of color, should feel natural antipathy, would rather pit us against each other than admit they are the authors of our pain. I think—many people by now think—that’s precisely what’s going on when the authorities in government, media, and academia push ludicrous narratives that turn even the most harmonious of racial interactions into divisive—pardon me, “intersectional”—lists of petty grievances.

How else do you explain absurd, ginned-up pseudo-controversies like the following?

The Washington Post, as if trying to get in one last kick to the hornet’s nest just before Trump left office and frustrated by his appeal across ethnic lines, ran a piece called “To Understand Trump’s Appeal, We Must Understand Multiracial Whiteness.” In short, if they’ve taught the world to regard “white” as synonymous with bad, establishment publications can begin applying the term to everything else they don't like.

If you don’t believe the most corrupt elements at the top of the establishment are pushers of wokeness and un-whitening nowadays, consider that sex trafficker Ghislaine Maxwell wanted it known she was seeking a less white jury.

A New York City school principal had students recite the poem “Brown girl brown girl” in honor of Kamala Harris, despite decades spent trying to convince students to peer deeper than skin color. Meanwhile, a teacher in Atlanta was protested and condemned for telling kids not to call each other “nigga” in science class. That seems upside-down—but then, we now live in a culture so inverted that San Francisco’s school system considered dropping Abraham Lincoln from the name of a high school because Lincoln purportedly hadn’t proved he truly believed “black lives matter.”

All this happens in the context of broader, not always racial, hypersensitivity. The culture is so far gone now that movie critics aren’t even supposed to comment on an actress’ appearance in a review, as if it were office harassment, with Variety recently issuing an apology over one of its film reviewers making aesthetic judgments after seeing Promising Young Woman.

I hope many among the young will look back and think there was briefly a period in history that wasn’t this insane—but at the rate history is being revised and outright lied about, I may be wrong to think people will remember the past, or in the case of the young, ever know it all. As Biden said in a town hall, pretending to share this concern but instead exacerbating the problem: “Why don’t we teach history?... A black guy invented the lightbulb, not a white guy named Edison.” Based on the flimsy fact Edison had a black collaborator, Edison is poised to be erased from history by people who consider themselves virtuous for pushing the lie.

And if journalism is, as the cliche goes, “the first draft of history,” that will have to vanish soon too: Harvard’s Nieman Foundation for Journalism has effectively called for an end to local news reporting because it sometimes reveals criminals are disproportionately black. Why worry about old-fashioned liberal-sounding things like root causes when you can just shut down discussion in 21st-century fashion? So much easier!

As Harvard reminds us, silly (and condescending) leftist extremism on race can’t be blamed on government alone. The elite private schools love to push such stuff. Back in New York City, the Dalton School faculty demanded employees' student debt be paid off, anti-white-supremacy courses instituted, and the advanced classes eliminated unless it was shown that blacks score just as well in them on average as everyone else. Punish success unless your favorite team wins, basically. That’s insane, as most non-whites agree. Try talking to them instead of white leftists for a change.

Yet the leftists think they’re doing non-whites a favor by writing things like a piece in The Nation (by Brandon Hasbrouck, assistant professor of law at Washington and Lee University in Virginia, a university—and state—still sometimes purported to have conservative tendencies) arguing “The Votes of Black Americans Should Count Twice: Vote reparations would empower us to replace oppressive institutions with life-affirming structures of inequality.”

Not to be outdone in the bias-as-justice department, Nature magazine announced it would henceforth reject behavioral science papers deemed offensive to the groups being studied or possessing any unacceptable social implications. Way to impartially sort that data!

There are feeble hints of pushback against some of this—talk of Detroit suing BLM for criminal conspiracy against citizens and property—but for every story like that there are a dozen efforts to, say, add a “mute white people” button on Instagram or empower a new Princeton committee to police faculty racism in publications and elsewhere. Admittedly, a school where white supremacist Progressive Democrat president Woodrow Wilson got his start has reason to feel wracked with white guilt, but the committee is probably a few generations too late to do much good.

In San Francisco, a museum director was ousted just for saying work by white men should continue to be included among art exhibits, while John Ridley, writer of Twelve Years a Slave, lately turns his talents to comics and depicts Captain America as such a tone-deaf tyrant he tells a rebellious Black Panther (the superhero, not the Party) to “go back to Wakanda or stick around and get your butt kicked.”

And all this constantly backfires and harms the very constituents it was meant to aid. The band Lady Antebellum proudly became Lady A to avoid Confederacy connotations but soon reportedly followed up by suing a black blues musician who already had that as her nickname—literally trying to erase a black female’s own name! You can’t just go back to the original name when the band’s already issued press releases and gotten liberal praise, though!

And still they tell me America hasn’t spent enough time facing its white racism, as if its liberal efforts toward that end are yielding happiness and peaceful coexistence.

These counter-productive moves are why some people, such as rational but bland and doomed Republican presidential candidate Mitch Daniels, have in recent years suggested erring on the side of simply staying out of the culture wars—though in the years since his brief run, it seems the culture wars won’t stay out of you. If you’re a normal, sane person (of any hue), you often have no clear stake in the outcome of many of these skirmishes but are unable to ignore them, like a peasant who knows only that rival armies keep trampling his farm, whatever causes their mysterious flags may represent.

There might still be some slim hope of getting the right to someday drop culture and ethnic grievances and go back to thinking about economics. (Culture is even more nuanced and complex than shifting market preferences and so surely ill-suited as a target of law-making and regulation. Activist politics is rarely more than a flick of the finger removed from seeking government action, which is half the reason people fight about all these topics when they should politely discuss them.)

Over on the left, though, even the people who pretend to want an end to culture wars (narrowly defined to mean something like “Bible stuff”) still want constant stoking of ethnic conflict. They still see it as a winning strategy for the Democratic Party and for other leftist institutions, if not necessarily for all the exhausted people those institutions ostensibly represent, people MLK likely would’ve been elated to see able to get on with the ordinary business of living.